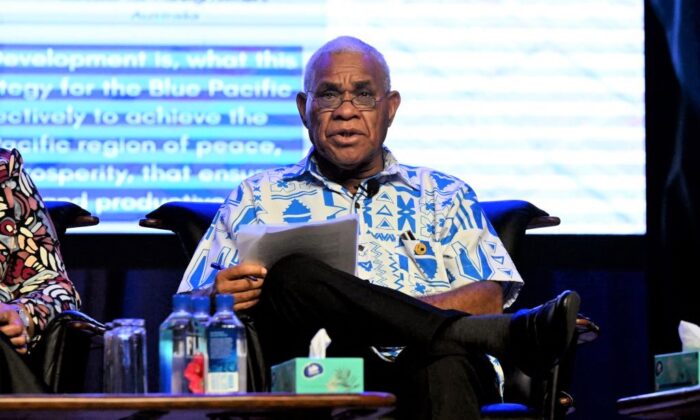 Vanuatu’s president has dissolved the Pacific nation’s Parliament hours before a no-confidence motion was brought against Prime Minister Bob Loughman.

The latest incident continues a tumultuous few weeks for democratic institutions in the South Pacific—already susceptible to influence from Beijing.

On Aug. 18, Vanuatu President Nikenike Vurobaravu signed the notice to dissolve Parliament—the next elections were due in 2024.

Presiding Prime Minister Loughman has faced pressure for months after he attempted to change the Constitution so as to extend term limits from four to five years and to also allow foreign nationals to hold office—there is a large population of Chinese nationals in the region.

However, Loughman was forced to shelve those proposed changes after opposing MPs simply did not show up to Parliament—meaning there was no quorum for the parliamentary session to go ahead.

In turn, on Aug. 16, Loughman and his supporters held their own boycott to avoid voting on the no-confidence motion.

Opposition leader Ralph Regenvanu responded saying he would challenge the dissolution order in court and that 29 out of 51 MPs in Parliament supported the no-confidence vote, according to Reuters.

The majority of Members who called the Extraordinary Session to table the Motion of No Confidence will be challenging this dissolution in court https://t.co/RB7lR1RhG7

It has been a challenging month for democratic institutions in Kiribati, the Solomon Islands, and Tonga.

Last week, three Tongan MPs were removed from Parliament after the country’s Court of Appeal found them guilty of bribing voters.

While Kiribati authorities attempted to deport Australian Judge David Lambourne, who serves on the high court of the Pacific nation.

Lambourne is also the husband of opposition leader Tessie Lambourne, who he says faces pressure to quit politics.

The judge said there was “strong circumstantial evidence” that China policy was a defining factor for the government’s role in trying to deport him.

“China’s strong preference would be to maintain this government in power,” he told The Australian newspaper. “Having a strong, articulate and eloquent opposition leader who speaks out is clearly not in this government’s best interest.”

Tessie Lambourne was critical of Kiribati President Taneti Maamau’s decision to switch ties—along with the Solomon Islands—from Taiwan to Beijing in 2019.

Meanwhile, Solomon Islands Prime Minister Manasseh Sogavare is trying to delay the country’s national election due next year citing cost as the issue. He claims the country cannot afford to run the national vote and the Pacific Games at the same time.

A week earlier, Sogavare forced national broadcaster, the Solomon Islands Broadcasting Corporation, to self-censor any content that was critical of his government.

All these Pacific nations have cultivated close ties with Beijing with Chinese Foreign Minister Wang Yi personally visiting in May.