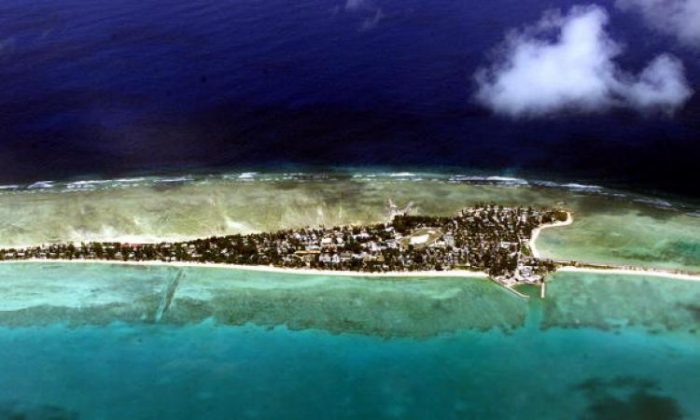 The Tarawa atoll, the capital of the vast archipelago nation of Kiribati in the South Pacific. (Torsten Blackwood/AFP/Getty Images)
Australia

A tumultuous week for democracies in the South Pacific
By Daniel Y. Teng

Australian David Lambourne, who serves on the High Court of Kiribati, remains in immigration detention after authorities failed to deport him from the small Pacific country.

Lambourne’s ordeal comes during a tumultuous week for democratic institutions across the South Pacific with the Tongan Parliament ousting three MPs for bribing voters just a day earlier.

High Court Justice Lambourne was served a deportation notice on Aug. 11 and taken to the airport in Kiribati’s capital Tarawa.

The Kiribati government accused him of breaching his visa conditions and of posing a national security risk, according to the Australian Broadcasting Corporation.

While his lawyers managed to secure an injunction against his deportation, authorities still tried to force him onto a Fiji Airlines plane destined for Fiji.

However, the pilot refused to fly an unwilling passenger, which led to a stand-off with authorities who relented and instead, confined Lambourne to a motel.

“Such behaviour is unacceptable and risks putting the Attorney-General [of Kiribati] and the persons directly concerned in contempt of court. It must cease,” according to a judgement from the Court of Appeal that handed down the injunction.

Lambourne is one of two High Court judges in the country—comprised of 33 small islands—and is also the husband of opposition leader Tessie Lambourne, who he says faces pressure to quit politics.

“She’s clearly a thorn in their side and as far as I can tell, all attempts to remove me are really an underhand means of trying to attack her,” he told AAP. “They think if I am forced out of the country, my wife will have to quit politics and follow me.

“They obviously don’t know her very well if they think that’s what she would do.”

Rule of Law Under Threat

Lambourne also warned that his attempted deportation was a breakdown in rule of law.

“We have a government that has demonstrated a clear willingness to blatantly refuse to comply with orders of the court,” he said. “The rule of law here has broken down completely. It’s a terribly sad situation for all of the people of Kiribati.

“Once you have an authoritarian government that demonstrates its willingness to completely ignore orders of the court, then everybody is fair game.”

The Australian government has contacted Lambourne.

“The government may be reluctant to risk some of their diplomatic capital on a case such as mine,” Lambourne said. “I would certainly hope they are making representations through the usual diplomatic channels.

“But there’s probably limited value in the Australian government trying to shout at Kiribati about their treatment of me.”

He also warned that his removal would hamstring the judicial system and prevent legal challenges to the national government from going ahead.

The situation in Kiribati comes just a day after Tonga removed three MPs for bribing voters in last year’s election. Their terms were cancelled by the Supreme Court of Tonga.

Earlier in the week in the Solomon Islands, Prime Minister Manasseh Sogavare’s government began its attempts to delay the country’s election saying running the Pacific Games and national vote at the same time was too expensive.

On Aug. 8, the Constitution (Amendment) Bill 2022 was submitted to Parliament, which will delay the nation’s elections by six months until Dec. 31, 2023. Originally Parliament was supposed to be dissolved in May 2023—an election must be held within four months of dissolution.

A change to the Constitution requires a two-thirds majority of the Solomon Islands Parliament, with the vote likely to occur next month, according to Reuters.

These problems have come to light as new data from the Australian Tax Office reveals that Kiribati residents hold $682 million in Australian banks across 876 accounts—hinting at issues of tax evasion or money laundering.