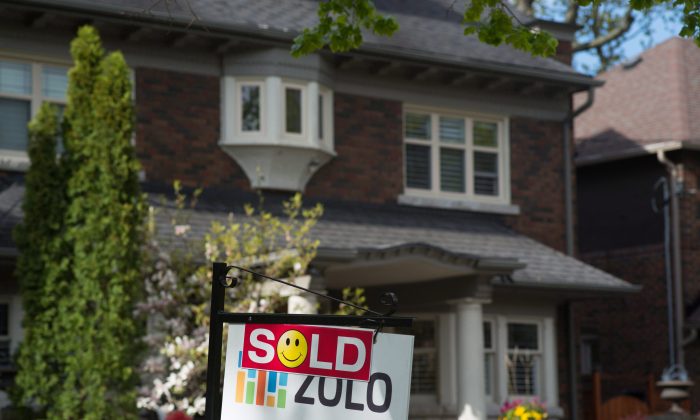 A sold sign is shown in front of a west-end Toronto home in this file photo. The housing bubbles in Vancouver and Toronto appear to be gradually deflating, but affordability is still extremely poor. (The Canadian Press/Graeme Roy)
Economy

Longer-term prospects for the large, unaffordable housing markets in Toronto and Vancouver remain upbeat, but in the near term, the situation remains weak as the adjustment to stricter mortgage rules goes on. Reducing regulatory costs to increase supply, which would improve affordability, rests in the hands of the provincial and municipal governments, according to analysis from the C.D. Howe Institute.

Things are getting worse in Vancouver and it’s difficult to say if Toronto’s market has finally bottomed.

“This is the first month where we’ve had a lot more supply come on the market,” said Phil Moore, REBGV president, in a phone interview. Supply in Vancouver is still below long-term historical averages.

In the Greater Toronto Area (GTA), home sales in May fell 22.2 percent from last year, according to the Toronto Real Estate Board. This is a slight improvement from the over 30 percent it had been falling earlier this year. But RBC senior economist Robert Hogue doesn’t see this as a turning point in the adjustment to the mortgage stress test that came into effect this year.

“I don’t think that the market is on an upswing yet,” he said in a phone interview. “We thought it would be.” Hogue said May’s numbers are still fairly weak and that the effects of stricter mortgage eligibility will have a prolonged effect on the market.

For Vancouver and Toronto, condo prices are showing the most strength as housing in higher price ranges suffers from buyers not being able to afford as much due to the higher mortgage rate qualification requirement.

“Following the stress test, people have less of a budget to purchase a home with, so they are targeting much more the lower price points, the condo segment,” Hogue said.

In Vancouver, condo (apartment) prices are up the most—20.2 percent in the last year. In Toronto, condos were the only type of housing to show any price increase—up 5.7 percent.

“It’s put a lot of pressure on the lower end of the market,” Moore said about the tighter mortgage eligibility.

The foreign buyer problem has very much been reduced to a secondary concern in Vancouver and Toronto. Hogue said in a recent report that, in the GTA, it dropped from 5.9 percent last year to 2.1 percent recently.

Housing in the Toronto and Vancouver areas remains unaffordable and more supply is badly needed. RBC’s housing affordability measure, which tracks the percentage of pre-tax income needed to own a home—mortgage, utilities, and property taxes—averaged 48 percent in Canada for the fourth quarter of 2017.

For the Vancouver area, this ratio was 85 percent and for Toronto it was 75 percent. Every other major city in Canada, aside from Victoria, was below the national average.

A report from the C.D. Howe Institute said regulation that impedes new construction makes up half the cost of housing in the GVA and a fifth of it in the GTA.

These barriers include zoning rules, restrictions on developing agricultural land, and development charges. The research argues that in a well-functioning housing market, the market price of housing should be close to the feasible cost of its construction.

“If prices persistently exceed this construction cost, it is often due to barriers that inhibit new construction. These barriers often stem from excessive regulations,” according to the report.

For Vancouver, the cost of housing restrictions is easily the highest in Canada at $600,000, said the C.D. Howe Institute.

It argues that the burden to reducing these costs falls on municipal and provincial governments and that costs imposed on housing regulation outweigh the benefits of land-use regulation, such as the Greenbelt.

But Moore is confident about the GVA’s longer-term prospects. “People want to come here. The dip could be short term,” he said, noting that the market has always found a way to bounce back after shocks like taxes or the financial crisis.

In its May 30 interest rate decision, the Bank of Canada also said it expects housing activity to pick up, supported by job and income growth.

Fundamentals favour Vancouver and Toronto. The two cities attract people from all over the world and the job prospects are promising. But for now, some more pain is in order before the market finds its balance.