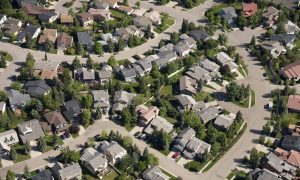 VANCOUVER, Canada—Real estate is front and centre in the minds of Vancouverites. It just seems to get hotter and hotter. While everybody can agree on most reasons behind such a robust housing market, one factor—the impact of foreign money—remains a debate.

For starters, the June figures from the Real Estate Board of Greater Vancouver (REBGV) showed sales were 29 percent higher than the 10-year sales average for the month. The benchmark price for all housing is now $694,000, up 10.3 percent from last June. For a detached property, it is up 14.8 percent to $1,123,900.

Always a major factor in determining the health of a housing market is the local economy. And Vancouver’s economy, little affected by the price of oil, is outperforming the rest of Canada. A BMO report on Vancouver’s economy notes that its 6.2 percent unemployment rate is well below Toronto’s (7.1 percent) and Montreal’s (8.3 percent), and that through 2017 it should fall down to just above 5 percent.

Population growth, especially of prime working age people, is also crucial for generating demand for housing. “Population growth in the 30-to-40 age cohort has just reeled off its strongest three-year clip since the end of the 1990s,” according to BMO. And supply isn’t keeping pace in the scarcity of land. Housing starts have been “remarkably stable at around 18,000 units per year over the past five years,” the BMO report stated.

What will also help a housing market is the climate. Being near the mountains and the ocean goes a long way. “We live in a highly desirable region,” REBGV president Darcy McLeod said in a July 3 news release.

The British Columbia Real Estate Association (BCREA) stated in an early June report titled “Market Implications of Foreign Buyers” that foreign ownership of housing is “considerably less than 5 percent of the housing stock and not more than 5 percent of sales activity.”

It’s a statement that most find hard to believe, based on media reports and anecdotal comments.

One real estate agent, who preferred to remain anonymous, said foreign (mainly Chinese) buyers make up more than 80 percent of the luxury market in Vancouver. The agent added that others believe the percentage to be higher. Granted, the luxury market gets most of the attention, but it is a small segment of the market overall.

We live in a highly desirable region.
— Darcy McLeod, President, Real Estate Board of Greater Vancouver

Andrew Peck, vice president of the Canadian Real Estate Association and proponent of the BCREA report, contends it’s mostly locals who are buying real estate because it has been a good investment over the long term.

“By far the vast majority of our clients purchasing real estate in all price levels of the Vancouver market are local buyers with local addresses,” said Peck, who is also VP and general manager of Royal Pacific Realty Group.

The problem comes down to a lack of data, and BCREA recommends that the government gather a residency declaration to gain more insight into this segment of buyers. And in some cases, it’s not just a matter of residency, but where the money to buy the home is actually coming from. So the perception of what is foreign can vary.

Data on foreign ownership gathered by Canada Mortgage and Housing Corp. doesn’t quite serve the purpose, as it is focused on condos, but not the much hotter higher-end detached homes segment.

“While we can’t quantify it, this group [foreign buyers] is probably adding another layer on top of already-solid underlying demographic and interest rate-driven demand conditions,” stated BMO.

Insight From the US

Some colour on foreign buyers’ preferences can be gleaned from the U.S. National Association of Realtors (NAR). In its “2015 Profile of Home Buying Activity of International Clients” report, from April 2014 to March 2015, four states accounted for half of all home sales to foreigners (resident and non-resident): Florida, California, Texas, and Arizona—all warm-weather states, like Vancouver is to the rest of Canada.

Of the group of foreign buyers, the Chinese purchased homes with an average price of US$831,800, while every other nationality of homebuyer had an average price below US$500,000. Thus in Vancouver, if foreign demand is affecting a market segment, it would likely be limited to luxury homes, which is consistent with anecdotal reports.

Headwinds Gather Steam Against Alberta’s Housing Market
Focusing on California as the best proxy for Vancouver, 57 percent of purchases from foreign buyers came from China. The BCREA report points out that, according to a 2014 NAR survey, about 5 percent of total California home sales (mostly split between San Francisco and Los Angeles) were to Chinese buyers.

The NAR report noted that about half of the Chinese foreign buyers in the U.S. were non-resident. In Vancouver, one of the issues the city is attempting to deal with is vacant homes, which is thought to be exacerbated by foreign buyers.

Given the factors of a relatively robust economy and labour market, limited supply, voracious demand, the right demographic, low interest rates, and nice climate, the presence of foreign buyers only adds to the froth of the market. But to what extent is hard to determine.

“While there’s plenty of anecdotal evidence and calls for regulation on the latter [foreign buyers], the true impact remains shrouded in mystery,” according to BMO.

“We have a scarcity of land in metro Vancouver and our real estate prices have never been cheap, at least not in my 32 years’ history as a realtor,” said Peck.