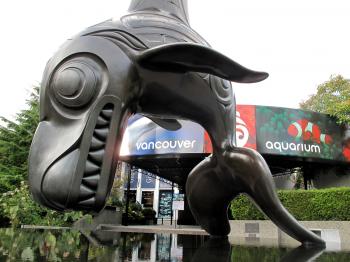 By Helena Zhu
Print
VANCOUVER—The Vancouver Aquarium has been recognized by the United States as a leader in ocean education and environmental literacy following an extensive selection and evaluation process.

At a formal ceremony recently, the aquarium was designated Canada's first Coastal America Learning Center for its display and interpretation of the natural world and its efforts to educate and engage the public in conservation.

“We have never been honoured by anybody in Canada for doing that. So it’s kind of interesting to get this giant plug and all this stuff from the U.S. State Department. That’s quite an honour,” said aquarium president Dr. John Nightingale.

“It improves integration within the U.S. government agencies and it is kind of vastly improving our ability to get information out to the public.”

The designation was given by Coastal America Partnership, a coalition of U.S. federal agencies, state and local governments, nongovernmental organizations, and the private sector that addresses coastal environmental challenges.

Nightingale said the designation has “opened doors” for the aquarium to many U.S. federal agencies’ resources that are available to the network of learning centers. While this is Canada’s first Coastal America Learning Center, the U.S. has 23.

As one of 19 collaborative initiatives, the U.S. Environmental Protection Agency (EPA) will offer time to Environment Canada and the Vancouver Aquarium onboard an ocean survey vessel to support research and monitoring projects in shared waters. The vessel is equipped with state-of-the-art sampling, mapping, and analysis equipment such as sidescan sonar and underwater video.

“We could never afford to buy time on that ship,” said Nightingale.

“The [EPA] will be working with the Canadian federal ministry of environment, but we get to go along, both for the sampling work and for telling the stories of what’s going on.”

As a learning center, the Vancouver Aquarium, together with Seattle Aquarium, will help get a “fairly loosely organized” cross-border conference focusing on Puget Sound and Georgia Basin more organized and formalized.

Some commitments the Coastal America partners already have in place include initiatives to address salmon management, invasive species, marine debris, and marine protected areas. Commitments have also been made for collaborative outreach efforts related to environmental issues of regional significance.

Nightingale said that many events and activities at the Vancouver Aquarium, the largest aquarium in Canada, are intended to inform public curiosity and understanding of nature, complementing the U.S. federal agencies which are “terrible at letting the public know what’s going on.”

“People are interested. They just don’t really have an idea of what to do. That’s more and more become the role of something like an aquarium,” he said.