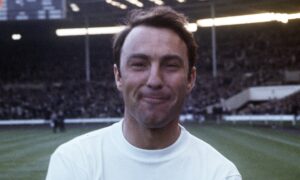 Manchester United took another step towards a 20th English League title with a 2–0 win over Stoke City at the Britannia Stadium on Sunday afternoon. Michael Carrick put the champions-elect ahead after just four minutes and Robin van Persie finally ended his 10-game goal drought with a second half penalty.

It was United’s ninth Premier League win over Stoke in 10 attempts and Sir Alex Ferguson’s 900th victory as manager.

The loss leaves Stoke perilously close to the relegation zone and the next few weeks will be a nervous time for their loyal band of supporters. This is unfamiliar territory for the Potters who have managed to achieve respectability, and more, in their five campaigns since returning to the top flight. They were runners up in the 2011 FA Cup and reached the knockout phase of the Europa Cup the following season.

Big Guns on Show for United

Following back to back defeats, Sir Alex Ferguson started Wayne Rooney, Robin van Persie, Javier Hernandez, and Shinji Kagawa. However, the best news for United fans was that skipper Nemanja Vidic was fit enough to take his place beside Rio Ferdinand at center back.

The combative Serb is precisely the type of battler required for an away fixture at Stoke. Phil Jones was selected at right back, adding more steel to the back four in anticipation of what was always likely to be a physical contest.

City boss Tony Pulis included playmaker Charlie Adam who has been in and out of the Stoke line-up, as well as Andy Wilkinson, and Glen Whelan who had recovered from a trapped nerve in his back. Veteran striker Michael Owen was on the Stoke bench and would be hoping for a crack at his erstwhile teammates at some point during proceedings.

The visitors were in no mood to take things easy having suffered back-to-back defeats at the hands of Chelsea and Manchester City. In fact, one has to go back 12 years since the Red Devils lost three in a row.

Playing in their away strip of blue and black horizontal bands on this occasion, Sir Alex’s team settled quickly and won a corner in only the fourth minute of play. Curled into the danger area by the trusty left foot of van Persie, it was just that bit too far out for the keeper to come and collect.

The ball bobbled around the 6-yard box with no Stoke defender able to clear their lines until Michael Carrick toe-poked the ball past Asmir Begovic in the Stoke goal.

United proceeded to treat the spectators to a delectable display of inter-passing and enjoyed some lengthy spells of possession. When Stoke did finally get hold of the ball Kenwyne Jones and Jonathan Walters found the opposition defense a tough nut to crack.

Not atypically, the only time they really threatened was from set pieces but even they were few and far between. They did not manage a corner until first half stoppage time.

United could have doubled their lead on 53 minutes. A glorious diagonal ball from Hernandez, who had done well to retain possession under a typically physical Stoke challenge, cracked open the Potters’ defense and set up van Persie with a chance, albeit from a tight angle, but the Dutchman could only hit the side netting.

However, the goal drought finally came to an end on 66 minutes. A clumsy challenge from Wilkinson clattered van Persie to the ground. It was an easy decision for the referee who pointed to the spot without any significant protest from Wilkinson or the rest of the Stoke players.

There was a nervous moment when the ball blew off the penalty spot in the strong wind; but van Persie replaced the ball, kept his composure, and buried it in the bottom corner with power and accuracy.

Stoke’s best opportunity fell to Ryan Shotton just four minutes later but his shot was saved by David De Gea—one of only a couple of saves the United keeper had to make all afternoon.

Ten minutes from the end Owen finally made an appearance to resounding applause from both sets of supporters. However, there were to be no last gasp heroics.

To be frank, Stoke simply did not have the class to really trouble their opponents. It may be time for them to move away from their overly physical style of play, which the rest of the teams in the league have now learned how to cope with. Moreover, there seems to be little point in bringing quality players such as Adam and Owen to the club if their talents are not going to be fully utilized.

Adam may or may not be at the Britannia next season but Owen has announced his retirement and will definitely be gone. In his heyday, the former Liverpool and England goal machine was one of the outstanding players of his generation.

He certainly had his moments over the last few seasons—a certain injury time winner in a Manchester derby springs readily to mind —but Owen suffered greatly with a succession of injuries in recent years.

There is no question that it is for his prolific time at Anfield that he will mostly be remembered, though whether the Kop will ever forgive him for going to play for their bitter rivals at Old Trafford remains to be seen.

It was always a pleasure to watch Michael Owen perform and we wish him well.