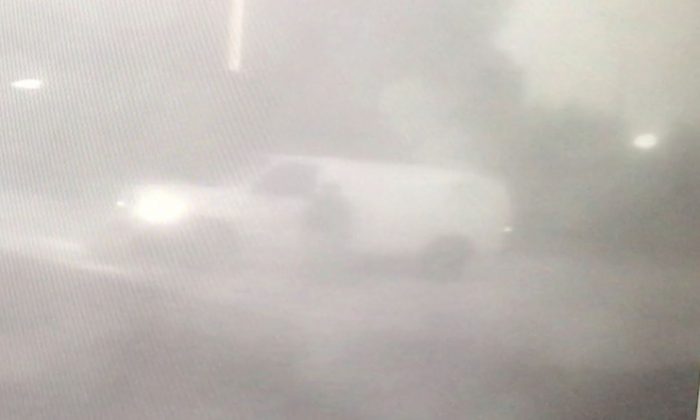 Camera footage from inside the ATM room of a Citizens Trust Bank in Decatur captures the moment a courier van with $1.8M was stolen. (FBI)
US

Van Left Running With $1.8 Million Inside Stolen in Georgia

A thief drove off with $1.8 million in an early morning heist in Decatur, Georgia—and all he had to do was smash a window.

The FBI has two agents working on the case in cooperation with the Dekalb County Police Department but they are asking for the public’s help in identifying the culprit with very little in the way of a description.

“Subject is described as being a male, wearing dark pants, baggy gray long sleeve T-shirt with a black backpack,” reads an FBI release on the robbery.

The robbery took place on Sept. 8 but the FBI did not release details on the robbery until Wednesday, Sept. 21. When asked about the delay, a public information officer with Dekalb County said he was not sure. FBI Special Agent Stephen Emmett said there was nothing beyond the release issued that he could add.

At 6:45 a.m. on that day nearly two weeks ago, a cargo van with approximately $1.8 in U.S. currency inside it was stolen while parked at the Citizens Trust Bank (CTB) located at 2592 South Hairston Road, Decatur, Georgia.

The money was being transported by ATM Response Inc., a cash logistics company whose services include replenishing ATMs. Its van was stolen when the two employees responsible for it went inside the bank to make a cash drop into the ATM.

The driver locked the van, but left the keys in the ignition and the vehicle running, which other media have reported is the company’s policy. Two calls to ATM Response for more information about the robbery and its policy of leaving the vehicle running were not returned by publication time.

According to the FBI, the driver and passenger were inside the bank for around 15 minutes. When they returned, their van had been stolen leaving little behind but some broken glass where it was parked.

The poor quality of camera footage of the robbery from inside the ATM room makes it difficult to make out details of the robber, but it reveals the backpack-wearing suspect approach the vehicle and pull on the driver and passenger door handles in an attempt to get inside.

“The vehicle was unoccupied, and there was no sign of the suspect at the scene,” notes the FBI release.

The FBI is asking anyone with information, especially people that live in the Hairston Forest South neighborhood in Decatur, to call Crime Stoppers Atlanta—(404) 577-8477— with tips.