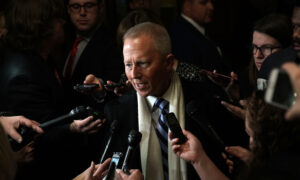 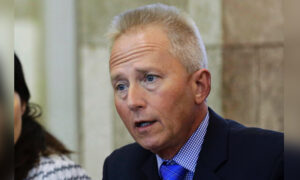 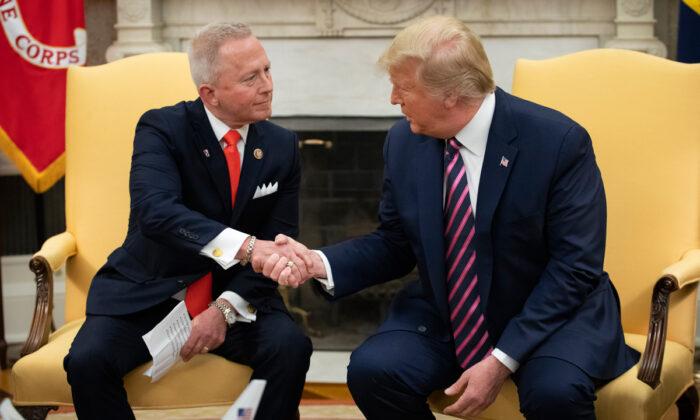 (L-R) Rep. Jeff Van Drew of New Jersey, who has announced he is switching from the Democratic to Republican Party, shakes hands with President Donald Trump in the Oval Office of the White House on Dec. 19, 2019 (Drew Angerer/Getty Images)
2020 Election

“I have endorsed Jeff Van Drew and will support his re-election campaign,” said Richter according to The Philadelphia Inquirer.

The decision was announced the day before President Donald Trump’s rally in Wildwood, NJ, in the district represented by Van Drew.

Richter is “the former Chief Executive Officer of Hill International, a New York Stock Exchange-listed global professional services firm that provides construction management services on building and infrastructure projects worldwide,“ according to the website David Richter for Congress. He holds five degrees in management, civil engineering, and law from the University of Pennsylvania, Harvard University, and the University of Oxford.

Richter, 53, said, “he became interested in running for Congress because he wanted to help restore Republicans to the majority in the House. He originally decided to challenge for Van Drew’s seat,” according to Burlington County Times. However, after Van Drew flipped parties, Richter, a native of Burlington County, where he grew up and where the headquarters of his family business, Hill International are located, decided to run for congress in the district. Burlington is his home county, which is currently represented by Kim, reported Burlington County Times.

While running in the neighboring district for the seat of freshman Democrat Andy Kim, Richter will compete with three Republican candidates—Kate Gibbs, a former Burlington County freeholder, who is already endorsed by the county GOP, also John Novak who currently serves as the Mayor of Barnegat, NJ, and Anthony Porto, a former Mayor of Hainesport, NJ.

No Democratic competitor has filed for the primary, according to Ballotpedia.

Kim, a freshman Democrat, was elected in 2018 and won by a slim margin of fewer than 4,000 votes, defeating Republican Tom MacArthur, according to Ballotpedia. In 2016 Trump won this district by six points, according to The Philadelphia Inquirer.

Richter promises to use his private-sector experience to promote reforms that will reduce government spending to balance the federal budget and work to enact reforms to “incentivize entrepreneurship,” cut taxes, and promote the growth of small and family-owned businesses, according to website David Richter for Congress.

He also supports securing the southern border and the immigration reform that “will oppose across-the-board amnesty,” and “seek to ban so-called sanctuary cities and states,” He will defend the Second Amendment, and promote “market-based” health care reform, that will “drive down the cost of medical care and prescription drugs,” while improving its quality, according to his statement on the website.

At the beginning of the year, Richter had $515,000 in campaign funding, mostly from his assets, and Gibbs had $135,000. Kim had $2.2 million, reported The Philadelphia Inquirer.