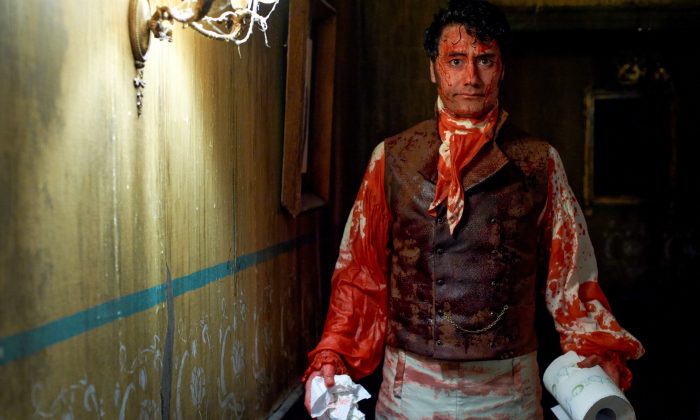 A scene from “What We Do in the Shadows,” a vampire spoof. (Unison Films)
Entertainment

Viago definitely needs a laundry detergent that gets out bloodstains. Even though his housemates are just as apt to cause them, he is the only one who is really good about doing the chores. Mundane, real world-ish conflicts get bloody in Taika Waititi and Jemaine Clement’s sly spoof “What We Do in the Shadows.”

With a firm agreement and the traditional protections against vampires in place, a crew from the New Zealand Documentary Board will produce a vérité record of the goings-on inside a vampire house somewhere in the suburbs of Wellington. Viago, a natty 18th century gentleman, will be the most welcoming and loquacious.

We will also get to know Vladislav, an 800-year-old torturer and impaler, who has mellowed and recent years; and the relatively young Deacon, who is still trying to forget an ill-advised dalliance with the occult-obsessed National Socialists. They also live with the 8,000-year-undead Petyr, who has pretty much gone the full Nosferatu by now. He doesn’t do chores—and nobody hassles him over it.

Deacon has a human familiar who periodically brings over prospective victims, but when Petyr accidentally turns Nick, they reluctantly welcome him into their lair. They quickly tire of his crass and obnoxious behavior, but continue to cut him slack for the sake of his human Stu. They all grow quite fond of the computer-consultant human, even though it was strictly against the rules to tell him about the whole vampire thing.

Although Waititi and Clement worked from a broad outline, the film is essentially improvised. It is entirely understandable if that puts you on your guard, but “Shadows” is consistently funny, probably because it never feels like it is trying too hard. They just let the humor flow naturally from the vampire Big Brother house situation. Whenever it starts to slacken, Waititi and Clement splatter about some blood and the film is back in business.

Waititi (also known as Taika Cohen) perfectly sets the tone as the guileless and old-fashioned Viago. Despite his ghoulishly predatory nature, he is strangely likable, as is the entire film. Clement appropriately hams it up as the gothy Vlad, and Ben Fransham’s desiccated Petyr is creepy as heck, but the film is really about friendship and acceptance of others’ differences.

Eventually, Wellington’s zombie population turns up, but it is really the pack of werewolves that steals the show. Just about every monster movie convention gets tweaked here and there, but it never feels like “Shadows” is forcing the issue to tick off another box. It is relaxed filmmaking in a way that really works.

Highly recommended for vampire fans. “What We Do in the Shadows” is showing in New York at the Landmark Sunshine.