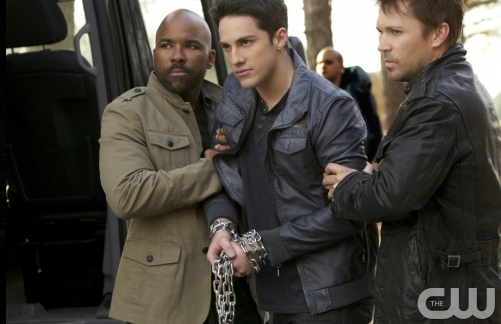 Vampire Diaries Season 6 Spoilers: Tyler to Find Someone New to Love; Alaric to be a Guardian to Elena

The Vampire Diaries season 6 has been hinted at extensively but several aspects haven’t been explored too much–the future of Tyler now that he’s a human, and how Alaric will fit back in now that he’s returned.

Tyler is the only one who came back as a human because of the way he died within the boundaries of Mystic Falls.

“Tyler has this do-over but along with it, comes all this hostility and rage and aggression that gets so bottled up in you when you have a latent werewolf gene. Now that he knows what he knows and just how wrong it can go, he’s going to work really hard to keep himself walking a straight line and to keep his temper in check and to be a good guy in spite of all that anger and ugliness that simmers inside him,” she told The Hollywood Reporter.

“It’s going to be a struggle, but it’s going to be a good struggle. I’m excited about Tyler’s storyline this year. It’s time for him to find somebody new to love, because one thing that can help us with the darkest parts inside ourselves is the light of love, so I’m looking forward to exploring that with him.”

Meanwhile, Alaric has returned, which Plec revealed was mostly because of a poll that asked which characters people would want to return, and the two answers were Lexi and ALaric.

“We decided to make one devastating and one hopeful. The thing about Lexi is that she did a beautiful sacrifice for her friend which is really what that character was born to be — that rock for Stefan. Alaric was created to be a guardian to Elena and Jeremy and if there’s anybody who needs that emotional support right now it’s Elena,” she told TVGuide.

“Him [returning] is a really beautiful circle back to that dynamic where he’s going to be there for her as a friend and as emotional support. But also now he has to come to terms with what it’s like to live life as a secret vampire. So she has something to teach him too. The Elena and Alaric friendship is something we’re really looking forward to next year and I’m super excited to have Matt back. He’s not only a fan favorite, but a cast favorite.”

Plec also said that Alaricis struggling with the fact that he’s this vampire hunter.

“Back when he got turned, it all happened so quickly. He went out of his mind; he never really had the human experience of living the life of a vampire. Now they can’t be in Mystic Falls, so they’re in a place outside of Mystic Falls where they have to keep it secret and be very discreet. Elena has to teach Alaric a tip or two about discretion. I think as we watched Alaric struggle with living the hidden life of a vampire, wouldn’t it be nice if a woman entered his life who he had interest in, that he had to hide that from? You get a little fun Stefan-and-Elena stuff in season one with Alaric, who is trying to get his life together.”

Plec wouldn’t reveal where they’re living but did say that the time jump from the end of season 5 to the beginning of season 6 is “more than a couple of months.”