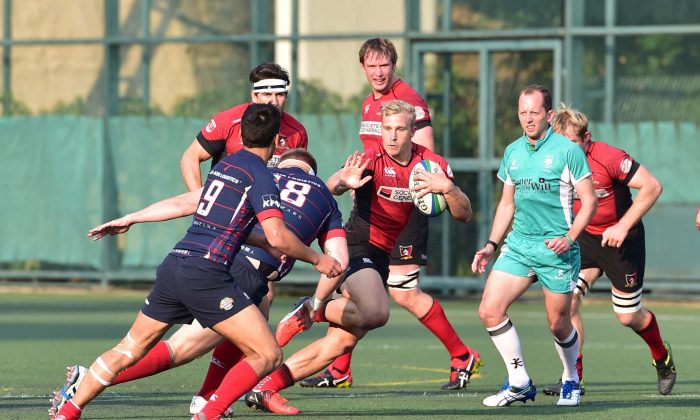 HONG KONG—Societe Generale Valley convincingly dispatched Bloomberg Hong Kong Scottish 29-3 at The Rock on Saturday. It was the top-of-the-table clash in the Hong Kong Premiership, yet Valley outscored their rival 4 tries to nil and any pretense of usurping their status as Champions needs to be backed by a more emphatic display than Scottish could muster.

It wasn’t a pretty game, but technically efficient by Valley, who edged Scottish in every department, and made full use of the wide pitch at The Rock to make speed, fitness and ball-handling skill count.

The game started cagily by both sides. Valley and Scottish missed early chances to go ahead until 15minutes when Valley flanker Toby Fenn was sin-binned, and Scottish flyhalf Gregor McNeish put Scottish ahead by 3 points.

This should have given Scottish momentum. It didn’t. With a man down, Valley moved-up a gear. On 25 minutes, a 40 metre break by Valley centre Lee Jones, was recycled in the Scottish 22, moved wide and fullback Tiger Bax sliced the Scottish defense to cross for Valley’s first try, and put Valley ahead 5-3.

Ten minutes later, after more Valley pressure, prop Grant Kemp rumbled over the tryline to push Valley further in front 10-3. A missed penalty by Scottish on the stroke of half time, kept the scoreline at 10-3 to Valley at the turnaround.

Scottish started the second half brightly but could not break the Valley defense: either the last pass went astray, or the ball was dropped or lost, or the player held-up, and with each mishap momentum swung in favour of Valley.

The Valley bench had an immediate impact, underlining this is a game of 23 not 15 players. First substitute prop, Taukiha’amea Koloamatangi barreled over for a try after 55 minutes, and later centre Matt Rosslee put the game beyond doubt when he crossed on 67 minutes, earning a bonus point in the process. Both players touched down with almost their first touch of the ball finishing-off well-worked moves where Valley stretched the Scottish defence. Ben Rimene converted the Rosslee try, his first successful kick of the afternoon, his normal metronomic boot was off-radar. Rimene finally slotted a penalty goal rounding the score to 29-3 to Valley.

The victory just about assured Valley the League and set a daunting challenge to their rivals for the Championship.

Next week is the final round of League matches before the Championship knock-out matches.