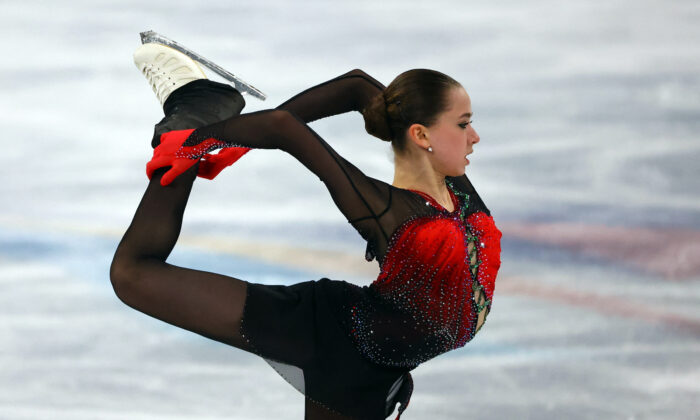 Kamila Valieva of the Russian Olympic Committee competes in the women's free skating program during the figure skating competition at the 2022 Winter Olympic Games in Beijing on Feb. 17, 2022. (Fabrizio Bensch/Reuters)
Beijing 2022 Olympics

BEIJING—Russian teenage figure skater Kamila Valieva tumbled to fourth place in the women’s singles event on Thursday, yielding to the pressure of a doping controversy at the Beijing Olympic Games.

In a final twist that ensures a medal ceremony will go ahead on Friday, Valieva’s compatriots Anna Shcherbakova claimed the gold medal and Alexandra Trusova took the silver, while Kaori Sakamoto of Japan claimed the bronze medal.

After stumbling to the ice more than once, 15-year-old Valieva masked her face with her hand as she skated head down towards the exit with her supporters shouting “Molodets!” “Molodets!” (Bravo, bravo).

Decked out in a sparkling black and red dress and bright red gloves, the skating prodigy kept her composure for 30 seconds and landed her opening quadruple Salchow jump.

But she then faltered after a triple Axel and made a number of uncharacteristic stumbles after that in a free skate routine set to Maurice Ravel’s “Bolero.”

After coming to a stop, she threw one hand forward in open frustration at a performance that was nowhere near her usual high standards, and ended almost 50 points below her own world record score on 224.09.

Valieva was left sobbing in the “kiss and cry” area after her performance.

In a high-octane routine, Valieva’s teammate Trusova, the 2021 world championships bronze medallist, attempted five quads to the soundtrack of “Cruella” and the Stooges’s “I Wanna Be Your Dog” for a season’s best free skate score of 177.13.

Fellow 17-year-old Shcherbakova’s free skate was not as powerful, but the world champion skated with accuracy as she landed two quads early in her program.

“I’m glad I managed my nerves and worries and showed my maximum at the right time and place,” said Shcherbakova, whose heart went out to Valieva.

“Of course I was very worried about her during the skate because from the first jump it was clear that the skate was not doing great. I really understand what an athlete feels in those moments.”

Shcherbakova, Trusova, and Sakamoto came back for the flower ceremony, staying on the ice for several minutes to soak up a moment they probably thought was not going to happen.

“I wasn’t expecting to place in the top three so I’m just overjoyed,” said a delighted Sakamoto.

The medal ceremony will take place on Friday at 7:45 p.m. Beijing time.

Valieva tested positive for a banned heart drug after the national championships on Dec. 25 but the result was not revealed until Feb. 8. She was eventually cleared to compete in the women’s single event by the Court of Arbitration for Sport (CAS) on Monday.

She came into Thursday’s skate as the heavy favorite and it was expected that the medal ceremony would not go ahead because of the unresolved doping case.

Valieva is one of the youngest athletes to have a positive test revealed at the Olympics.

It has also fueled a debate over raising the age limit for figure skating.