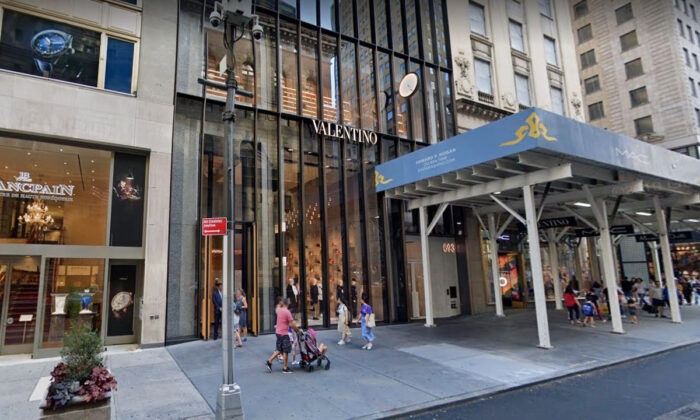 NEW YORK—Italian fashion company Valentino SpA has sued the landlord of its American flagship store on Manhattan’s Fifth Avenue, seeking to void its lease because the CCP (Chinese Communist Party) virus pandemic has made keeping the store open impossible.

In a complaint filed on June 21, Valentino said the store, located two blocks south of Trump Tower, can no longer operate “consistent with the luxury, prestigious, high-quality reputation” of its neighborhood, as the lease contemplated.

Valentino told its landlord Savitt Partners it planned by year end to quit its lease, which began in 2013 and expires in 2029, but said the landlord wrote on Friday that it would not accept a surrender.

The lawsuit in a New York state court in Manhattan is one of several between retailers such as Gap, H&M, Victoria’s Secret, and the National Basketball Association and their Manhattan landlords after the pandemic forced store closures.

Valentino’s store is at the midpoint of a half-mile stretch of Fifth Avenue from Rockefeller Center to the corner of Central Park containing many luxury retailers, with high rents.

Much of that stretch became dormant in mid-March, when New York officials closed “nonessential” businesses to curb the spread of the CCP virus.

Some restrictions were lifted on Monday, and some in-store shopping is now allowed.

But Valentino said shoppers have grown fearful of “in person, ‘non-essential’ luxury retail boutiques,” and that “even in a post-pandemic New York City (should such a day arrive)” the Fifth Avenue location was irreparably damaged.

Keeping the store open is “impractical, unfeasible, and no longer workable,” it said.

On June 8, Victoria’s Secret, part of L Brands Inc., filed a similar case to void the $938,000-a-month lease for its flagship store in Manhattan’s Herald Square.