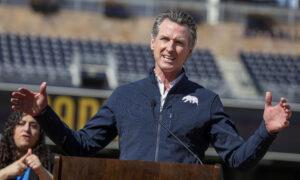 Valentine’s Day—What’s Love Got to Do With It?

For a holiday increasingly taken over by chocolate hearts, teddy bears, and expensive dinners, it’s heartening to hear that for many, the meaning of the day has not been lost.

As we near Valentine’s Day, Bay Area folks reflect on the meaning of love.

It’s a cool evening in the swank, upscale mixed development known as Santana Row, San Jose’s premier outdoor shopping and dining destination. A dutiful husband waits patiently on a bench as his wife and two kids spend countless hours shopping to their hearts content, embodying his idea of true love.

“If you want to have a long-term relationship, you have to have a lot of forbearance and commitment,” said John Scott Johnson, a 54-year-old Bay Area native who now lives in Kunming, China, with his wife of nine years and their two children. Johnson works as a high school teacher in an international school in Kunming, teaching math, physics, and chemistry.

“I hate shopping,” Johnson laments. He has now been shopping for eight hours. “But making a marriage work is about realizing what’s important to your spouse is indirectly important to you.”

Mr. Johnson plans to take his wife to a nice restaurant for Valentine’s Day, visit Disneyland and Universal Studios, and as if he hasn’t learned his lesson already: more shopping.

Sometimes love is not all gifts and celebration. Oftentimes it requires sacrifice and a sense of duty and propriety.

“It’s getting through the thick and thin, no matter what,” she says.

Rice and her husband of many years have had to deal with bouts of unemployment and illness, one after another. She has watched her husband go through 24 surgeries over the years, including an esophagectomy, to deal with issues relating to his lungs, kidneys, and heart. Through all this hardship, Rice has always stayed by her husband’s side for the painful recoveries and excruciating treatments.

“It’s just about putting one foot in front of the other every day,” she says.

So what keeps them together? “The faith in knowing we were committed for all of eternity,” she reflects solemnly.

Chris Cook, a 42-year-old Juniper Networks employee, has come to his own unique understanding of what’s important in marriage after more than 15 years. “I’ve come to realize it’s the small things that are just between the two of you that mean the most … and lots of jewelry,” he adds jokingly.

For example, “My wife and I leave each other little cotton balls (an inside joke) around the house. Like before I left on this business trip,” Cook says.

His colleague, 34-year-old Anish Mishra visiting from New Delhi, India, chimes in. “Love is binding and understanding, trying to give preference to my wife.”

Mishra, who’s been married to his wife Komal for seven years, illuminates us on Valentine traditions in his country. “Couples celebrate in small parties. Gift-giving is a little tedious; I normally start thinking about it two days before Valentine’s Day,” he confesses. Cook assures him it’s a trait shared by spouses around the world—procrastination and last-minute gift selection.

Valentine’s Day has been celebrated in India since the opening up of the country’s economic policies in 1991. Many of the younger generation revel in the courtship rituals and open expression of affection of the day, though protests have also followed the introduction of this Western tradition, which is believed to be at odds with India’s strict religious culture.

Similar to those in the United States, couples exchange cards and gifts and make elaborate plans to celebrate at eateries, hotels, and community halls throughout the country.

Sometimes love is a deep spiritual connection between two human beings, and their sense of a greater devotion.

A well-dressed woman in a crisp burgundy sweater and cozy vest, waiting for her husband of 10 years, had her own very spiritual take on the meaning of the holiday.

“I think Valentine’s Day is overpriced and overrated. We try not to get caught up in the materialistic aspect of it. But it’s nice to celebrate your true genuine love for someone.” The Santa Clara resident and her husband choose to celebrate Valentine’s Day a week or so after the day itself when restaurants are no longer filled to capacity, and there is not a premium on roses.

Her belief in a greater love from a higher power keeps her from getting lost in all the materialism surrounding the day.

Sometimes love is learning to love someone more than yourself.

“It’s like having a child, having unconditional love for someone. You put them on a pedestal.”

She finds herself thinking of her boyfriend, Devin, even in the mundane things of everyday life. “Every time I buy something, I think, oh, I should buy something for him, too.”

Sanchez was drawn to her beau by his “raw, unfiltered, is who he is” attitude toward life. She explains that her boyfriend has Asperger syndrome, which causes individuals to have difficulties in social interaction and nonverbal communication. He’s faced challenges making deep connections with other people throughout his life, making their closeness and affection all the more poignant.

So what does Sanchez anticipate for her Valentine’s Day? A heart-shaped cookie cake, a flower delivery to her home, chocolate-covered strawberries, and best of all, a romantic, home-cooked meal.

Peter Palmasano of San Jose says the ways to his heart include “camping, hiking, taking road trips with no specific destination, evenings at home with good food, and Netflix.”

As for his take on the meaning of love: Unconditional, always wanting to do things for the other person, to take care of them, help them be a better person. Daydreaming about them and wanting to share your life with them, and staring deep into their eyes.

Although people express and experience love in many different ways, a few things seem consistent—true love involves giving of oneself and caring for others; it involves sacrifice and forbearance to foster longevity and solidity.