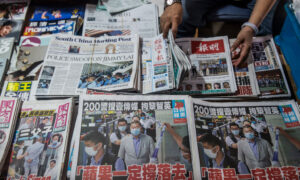 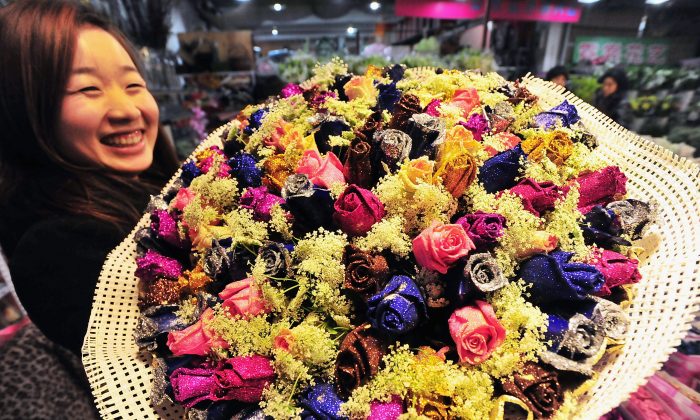 A woman poses with a bouquet of roses at a flower market in China as Valentine’s Day approaches in this file photo. (ChinaFotoPress/Getty Images)
China

Thoughts and anticipation turn to romantic love for many people this time of year as Valentine’s Day approaches.

It is a time to celebrate love and affection as we express appreciation for the special people we cherish in our lives. It is also an opportunity to reflect on the joy and meaning that love brings—not only the happiness that comes from beautiful dreams fulfilled, but also the preciousness of our intimate relationships and the strength and wisdom gained from life’s twists and turns that can unfold.

Here are two stories from ancient China that speak to these themes as we salute Valentine’s Day and its dedication to love and devotion.

Predestined to Be a Couple

The story of Princess Lechang and her husband Xu Deyan is one that not only depicts a pure and lasting love but also the virtue and sincerity of the ancient Chinese people.

Linked to the Lantern Festival, the story also celebrates family togetherness and reunion, symbols of the festival that occurs on the 15th and last day of traditional Chinese New Year festivities.

As the story goes, Princess Lechang was a beautiful and intelligent woman who lived during the late Southern and Northern dynasties (A.D. 420–589). She and her husband lived a happy life together in the state of Chen. However, their lives were shattered when the Sui Dynasty (A.D. 581–618) army from the north attacked the state of Chen.

The story of Princess Lechang and Xu Deyan not only depicts a pure, lasting love but also the virtue of the ancient Chinese people.

Knowing that he and Princess Lechang might become separated amid the chaos of war, Xu Deyan spoke with his wife gravely. “With your beauty and talent, you will certainly be taken captive into a powerful and wealthy household if the Chen state falls, and we may be separated forever,” he said.

Still, the ancient Chinese people believed that all relationships are predestined, and Xu was no exception. He had faith that if he and the princess were destined to be a couple for life, they would be able to reunite no matter what the circumstances.

So he made a plan for the future. “If our predestined relationship as husband and wife is not meant to end, and there is still hope to be together again, we should have an appropriate keepsake to serve as a sign so that we can find each other again,” he said.

Xu took a bronze mirror and broke it in half. He kept one half and gave the other half to his wife. The couple promised each other that should they become separated, then on the Lantern Festival each year they would each go to the capital city’s marketplace and offer his or her half of the mirror to sell, with the hope of reuniting.

‘A broken mirror joined together’

As history unfolded, the state of Chen soon fell and the couple indeed became separated in the turmoil.

After much hardship, Xu Deyan finally made his way to the capital. He took his half of the mirror and went to the marketplace on the Lantern Festival as promised. There, he noticed an elderly servant also attempting to sell a broken mirror.

Xu recognized that it was the half that belonged to Princess Lechang, and learned from the old man that his wife had been made a concubine of the powerful Sui minister Yang Su. Unable to come to the marketplace herself, she sent the servant with her half of the mirror to try to look for Xu.

Heartbroken, Xu penned a poem on his wife’s piece of the mirror, in which he likened her to Chang’e, the beautiful Goddess of the Moon. He wrote: “You went away with the mirror, and now the mirror has returned without you. Without the reflection of the image of Chang’e, the bright moon shines in vain.”

When the princess read the poem, she could not help but weep and did not eat for days. The minister thus learned about the true love between the princess and Xu Deyan. Greatly moved and sympathetic to their plight, he sent for Xu and allowed the couple to reunite. Moreover, he provided them with the means to return to their hometown, where they spent the rest of their lives together, never to be separated again.

The Butterfly Lovers: A Look at China’s Romeo and Juliet

This story is the origin of the Chinese idiom “a broken mirror joined together.” It depicts the reunion of a husband and wife after an involuntary separation. It can also be used to refer to a couple’s reconciliation following a breakup.

“Two hearts forever linked together, until the hairs turn white in old age” is a common Chinese blessing given to a bride and groom to wish them a happy and lasting marriage.

This imagery is used in the title of a poem associated with another famous ancient love story, from the Western Han Dynasty (206 B.C.–A.D. 23) some 2,200 years ago. “Poem of the White Hairs” is believed by some scholars to have been written by Zhuo Wenjun, the talented and beautiful wife of leading poet, writer, and official Sima Xiangru.

Sima Xiangru and Zhuo Wenjun lived the rest of their lives together and realized the ideal of growing old together as a white-haired couple.

The couple’s story began with a deep and committed love—Sima as a gifted but poor scholar and Zhuo as a recently widowed daughter from a rich family. They fell in love at first sight.

Sima later rose in prominence and became highly regarded by the emperor. But his success also led him to move away to the capital city, leaving behind Zhuo, who continued to love him with all her heart. Sadly, her heart was broken when she learned that he had met a young woman and wanted to take her as a concubine.

‘Poem of the White Hairs’

Through her “Poem of the White Hairs,” Zhuo told her husband that she had resolved to leave him, as their relationship had lost its purity. She wrote that love should be “bright and clean, like the snow on the mountain and the moon among the clouds.” Genuine trust and sincerity are precious for a relationship, she conveyed, and when this is gone, then what’s left of the so-called romance is but a lowly desire.

Zhuo also expressed how a lifelong, devoted marriage partner is what everyone hopes for, to never be apart from each other even as their hair turns white. She reminded her husband that “a man should attach importance to kindness and righteousness.” “How can wealth take its place?” she asked.

This love story has a positive ending, as Sima was so touched by his wife’s poem that he abandoned his plan to take a concubine. The two lived the rest of their lives together and realized the ideal of growing old together as a white-haired couple.

The poem exemplifies the clear-headed response of one with a peaceful heart of courage and resolve despite the pain of losing love and being wronged. It is also filled with a calm dignity and humble kindness, speaking directly to the other person’s aware side that clearly knows right from wrong.

It is well regarded as an inspiration and encouragement to others who might find themselves in a similar situation. Indeed it could serve as a source of wisdom for any couple wishing to establish true, lasting love.