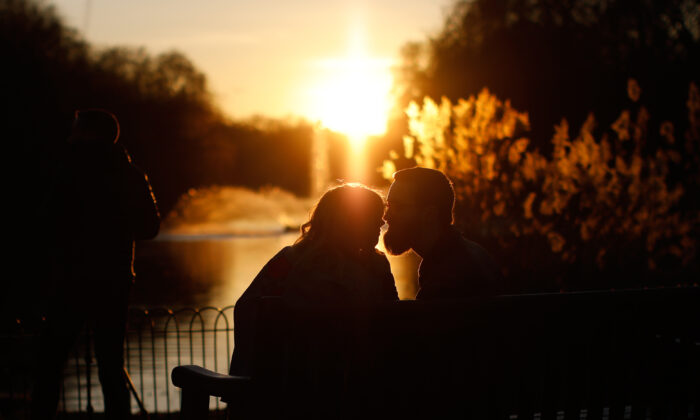 A couple kiss as the sun sets in St. James's Park on Valentine's Day on Feb. 14, 2019. (Tolga Akmen/AFP via Getty Images)
Viewpoints

“Affection is responsible for nine-tenths of whatever solid and durable happiness there is in our lives.” – C. S. Lewis, “The Four Loves”

Despite being a mother and a romantic, I’ve always hated Mother’s Day and Valentine’s Day for the same reason: They seem like Hallmark holidays—saccharine without substance—and they put pressure on boys and men alike to woo with gifts and notes, all for the sake of a day on a calendar.

As my four young kids approach this holiday, earnestly wondering why—and how—to pass out “valentines” to classmates who are more friends than lovers (of course), I’ve thought about friendships more than ever.

Love, romance, and maybe even agape (sacrificial) love are what first come to mind for many people around Valentine’s Day. It was estimated last year that Americans would spend $20.7 billion to celebrate the day. I don’t blame these people who want to celebrate love with someone they love.

Whether it was a night out or a sticky note left on the counter with my dad’s scribble “Happy 14!,” I’d smile at the relationship of these two people whom I saw more as parents than a married couple. Forty years later, they’re still celebrating.

If this is what Valentine’s Day means for people who celebrate it, by all means, embrace this: Woo your woman with flowers; ladies, shower your man with tickets to a game. “Happy 14th” to these people who made it.

Still, as a parent and a bit of a Valentine Scrooge, I told my kids it was more than okay to give their friends at school valentines—because friendship is one of life’s greatest gifts.

C.S. Lewis once famously said in his book “The Four Loves,” “I have no duty to be anyone’s Friend and no man in the world has a duty to be mine. No claims, no shadow of necessity. Friendship is unnecessary, like philosophy, like art … It has no survival value; rather it is one of those things that give value to survival.”

Most Lewis fans focus on the latter part of that quote, that friendship gives “value to survival,” and if you’ve had a “bosom friend” like Anne of Green Gables has, you know what that means. Friendship really does feel like it makes the daily slog of life worth living.

However, it’s worth noting that part of what makes friendship so powerful in one’s childhood and adulthood is that friends are often chosen, optional, accidental, and purposeful; they can weave in and out of one’s life like a season or they can remain steadfast fixtures of a very specific kind of love.

Either way, the fact that friendship is rarely made out of duty, that there’s no “shadow of necessity,” gives it a precious, yet tenacious, quality—I’ve chosen you.

When I was growing up, my grandparents weren’t nearby, so my parents fostered friendships with several families that I grew to aptly call “The Friends.” (Original, I know.) The adults enjoyed the same hobbies, such as sports and waterskiing, went to the same church, and they all had children—many of us went to the same school. For most of my childhood, I grew up with these families, and they became like family, almost better than family, because we had chosen them and they had chosen us.

We truly lived life together for over ten years: We went on vacations, babysit each other, rode horses, swam in lakes, held graduation parties, scolded one another, and laughed with one another. We knew their habits, memorized their phone numbers, and watched as their marriages fell apart and their children made poor choices.

It was as reciprocal of a relationship as I have ever seen, the foundation of friendship-love I now experience in adulthood. What perhaps no one knew then, even my parents, but what I realize now: These friends provided stability, affection, respect, and love that grandparents and aunts and uncles would have likely provided but couldn’t due to distance.

I also had a handful of other friendships in childhood that met this requirement, and with whom I remain close even now. There’s a certain deep satisfaction, even relief, from being known, and knowing someone, as deeply and fully as you do from childhood on.

If you remember your childhood friends fondly, listen to the song “Old Friends” by Ben Rector, and I dare you not to cry your eyes out. The girlfriend who sent me a link to his music video on YouTube has known me since second grade. The chorus goes like this:

Can you take me back when we were just kids
Who weren’t scared of getting older?
‘Cause no one knows you like they know you
And no one probably ever will
You can grow up, make new ones
But truth is there’s nothing like old friends
‘Cause you can’t make old friends

Some Friendships Are Forged by Fire

C.S. Lewis observed, “To the Ancients, Friendship seemed the happiest and most fully human of all loves; the crown of life and the school of virtue. The modern world, in comparison, ignores it.” This is, of course, true.

The modern world might seem like it ignores friendship, or doesn’t honor it as “the crown of life” because it has many rivals, especially in adulthood: A new marriage, the birth of a baby, juggling a career and parenting. Even social media remains a gnawing challenge to authentic friendships.

However, social media not only fails to be a salve for our aching hearts and minds but it also stretches, pulls, and even cracks the wounds of insecurity, loneliness, depression, and anything else, wide open.

When the apps are closed and the phone remains idle, the wounds lie open, bleeding, susceptible to infection and even more pain.

Friendship isn’t the only way to resolve this—I’m of the belief that only the love of a supernatural God can heal the deepest of wounds caused throughout one’s life. But I think, if God is the Ultimate Healer, He gave us friendship to be a temporary bandage, a soothing medicine for the aching, throbbing pain life inevitably brings.

“Daily” friends are special gifts. These are the ones who know how I take my coffee and what I look like when I cry, and I know their kids’ birthdays and what cocktail they ordered at their favorite restaurant last time we went.

These are the friends who brought me food when one of my babies made it to heaven before I got to meet them, whose husbands helped move me out of my home, dragging broken furniture to the dumpster in the rain, and who have called me crying when her husband was diagnosed with cancer, when our best friend lost her teenage daughter, and when they just had a long day and needed someone to whisper a prayer of peace over their lives.

While my day-to-day friends help me navigate childcare, nights out, or even entertain a political rant here and there, I’ve been lucky to forge deep, satisfying friendships with a smaller circle of people who are my intellectual and ethical equals, if not my betters.

These are people whose lives I wouldn’t dare interrupt with daily trivial matters, grocery lists of things I’ve done; these are the people to whom I’ve implored their advice and prayers, appealing to their grace, experience, and wisdom during times when I’ve desperately needed it. Graciously, they’ve returned this to me, and without these friendships, my life would certainly be less rich.

An even smaller circle of these friendships are with people who are by nature complex, intense, zealous, and passionate. As I’m drawn into their magnanimous personalities, with it inevitably has come disagreements, sometimes over weighty matters.

With some of these disagreements, we weighed the costs of a friendship lost and the rewards of a friendship that forges ahead, and after the calculation we gritted our teeth, determined to either resolve our passionate differences or—after zealous and strenuous discourse—agree to let it go. The reward these friendships offer remains a unique, hard-fought treasure.

Friendships really thrive only if you’re committed to being authentic, vulnerable, trustworthy, reciprocal, and kind. Not everyone can or wants to be this way, and for these people, they’ll miss out on one of life’s greatest gifts. As Proverbs 27:17 said, “As iron sharpens iron, so one person sharpens another.” I’ve never regretted these friendships, as complex as they may be.

Is Valentine’s Day for lovers and just about love? Maybe. Until my kids get there—and I hope this is still far away for them—I’ll be more than happy to encourage them to send notes of affection to their friends, so they, too, can experience one of life’s greatest gifts.