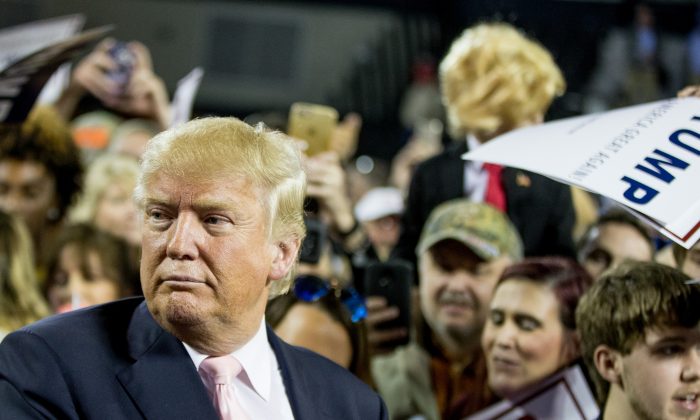 A group of about 30 black students said they were ejected from a Donald Trump rally at a state university in Georgia—on the orders of the Trump campaign.

Some of the Valdosta State University students were crying after being removed by law enforcement officials.

“We didn’t plan to do anything,” Tahjila Davis, a 19-year-old mass media major, told the Des Moines Register.

The only reason we were given was that Mr. Trump did not want us there.
— Brooke Gladney, protestor

“They said, ‘This is Trump’s property; it’s a private event.’ But I paid my tuition to be here.”

Brooke Gladney, a 22-year-old marketing and business management major at Valosta State, was also among the students ushered out. “The only reason we were given was that Mr. Trump did not want us there,” she said.

But the Trump campaign denied the allegations.

VSU TRUMP RALLY #BlackLivesMatter And this is the school we attend… pic.twitter.com/sWfX4RksFd

“There is absolutely zero truth to that,” said campaign spokeswoman Hope Hicks.

One Secret Service agent oversaw the students’ removal, but agents did not actively participate in escorting them out.

“If a group at an event protests, it does not become an issue with the United States Secret Service unless our protectee is threatened,” Kevin Dye, a spokesman for Secret Service, told CNN. He said it’s not uncommon for Secret Service agents to monitor these situations, but they do not actively participate in removing protesters.

There is absolutely zero truth to that.
— Hope Hicks, campaign spokeswoman

Another Secret Service agent told CNN the protesters were “asked to leave by the host committee and local law enforcement.”

“We do not escort protestors (or) disruptors out of events,” the agent, speaking on background, said. “(It’s) not a Secret Service function and (campaign) staff knows that.”

The group of students who were told to leave were left confused and upset.

“I don’t understand why they would do something like that,” Davis said. “I have not experienced any racism on this campus until now.”