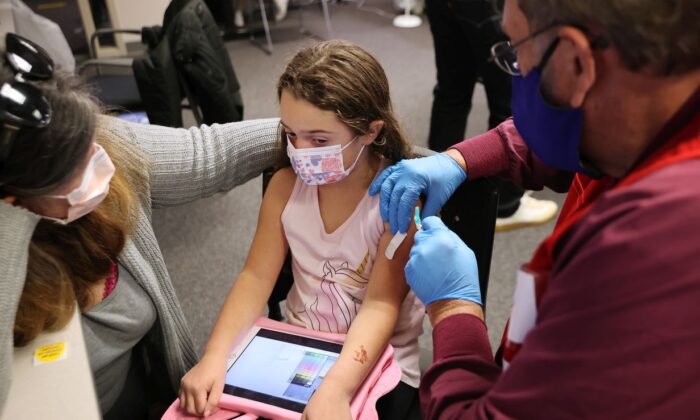 Western Australia has mandated vaccinations for school staff, and is encouraging children to get vaccinated as well. (Chip Somodevilla/Getty Images)
Australia

The principal of a catholic school in Western Australia (WA) is reportedly seeking legal advice on closing a school rather than enforcing the state’s vaccination mandate.

Last month, WA Premier Mark McGowan announced that vaccinations were to be mandatory for 75 percent of the state’s workforce—equivalent to over a million workers—which includes teachers and other educational staff.

But according to The West Australian, Adam Zydek, principal of the Divine Mercy College in south Perth, had allegedly angered staff after distributing “anti-vaccination literature.”

“Everyone was in tears,” the staff member told The West Australian. “Staff walked out of the meeting.”

The staff member accused Zydek of previously having an anti-vaccination stance, where he allegedly claimed that the technology used to develop the vaccines had used aborted baby foetuses and that more people had experienced illness or death from the vaccines than the COVID-19 infection itself.

According to an article published in Nebraska Medicine, the research and testing phases of the development of the mRNA vaccine, and the production of the Johnson & Johnson vaccine, used fetal cell lines grown in a laboratory that had originally come from an aborted fetus.

The fetal cell lines are not in the mRNA vaccines themselves.

Read More
Western Australia Govt. Pushes For Children to Roll up Sleeves and Get COVID-19 Jab

Zydek, who led the school since its founding in 1996, said that they were in the process of making a decision, but that the outcome would take the best interest of the 400 students and 50 staff into account.

The alleged event has outraged representatives of government, unions, and some of the school’s parents.

WA Education Minister Sue Ellery said that Zydek had “frightened” staff who were now facing the potential loss of their jobs, and students who could see time away from school.

“If you were a parent with a child at that school you would be thinking about whether or not you needed to move your child somewhere else,” Ellery said, reported 7News.

“He’s causing a lot of unnecessary stress and angst for people that don’t need it,” Collopy told 6PR. “They don’t need it anytime, but term four in a school is a really busy time, and they’re trying to finish the year off, and they just don’t need this uncertainty or this stress.”

A parent of a child at the school said he was “angry” and “confused” about where his children would go if the school did close.

The decision to shut down the school will be made by its governing body, the Association of Independent Schools of WA (AISWA).

“We are aware that there are rumours that the school may close,” AISWA executive director Valerie Gould told The West Australian.

“We would not like to see the school close, and we’re very willing to assist the school and the school community continue to cater for all their students into the future.”