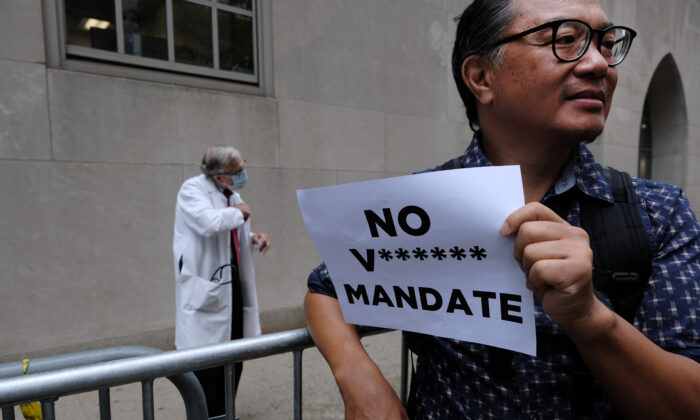 Vaccine Mandates ‘Creating a Two-Tier Society’ in the US: Expert

While there is technically no federal COVID-19 vaccine mandate in the United States, widespread vaccine mandates among public and private institutions have formed a “de facto…nationwide mandate” that is “creating a two-tier society” in which the unvaccinated are systematically ostracized, warns economist and author Jim Rickards.

“Whether you had [COVID-19] or not, need [the vaccine] or not, young or not, vulnerable or not, you have to take it, or you’re going to be pushed to the margins of society,” Rickards, author of “The New Great Depression: Winners and Losers in a Post-Pandemic World,” told The Epoch Times.

In addition to government institutions mandating vaccines—including the Pentagon recently requiring that military members get vaccinated—private companies requiring employee vaccinations include Walmart, Google, Netflix, Disney, and Tyson Foods. President Joe Biden specifically thanked these companies in an August press briefing “for their recent actions requiring vaccination for employees,” and said, “I know this isn’t easy—but I will have their backs.”

“One by one, these private institutions, think tanks, universities, state and municipal governments, the military, federal police … federal contractors … uniformed military, etc. … when you add up all these individual mandates, public and private, they’re tantamount to a federal mandate, even though there’s no single federal mandate,” Rickards said.

“This is just a drive, almost a monomaniacal drive, to get everybody in America to take the vaccine. Everybody,” he added. “If you want to participate in society, whether it’s going to school, dining out, social life, sports, whatever, you have to be vaccinated. If you’re not vaccinated, you’re going to be, in effect, in the basement. You’re going to be crammed down in the basement. You’ll be treated like a leper.”

Rickards further described a new societal dynamic that he sees taking shape, saying that there is an institutional drive to make life difficult for those who resist receiving a COVID-19 vaccine.

“[Institutions are] not content. They’re saying, well, in some situations, we can’t force you to take the vaccination, but we’re going to make your life miserable in the meantime by saying you have to be tested once a week or you have to sit apart,” he said, using sporting events as an example. Earlier this year, Major League Baseball’s Seattle Mariners provided special “vaccinated-only” seats without social distancing for fans who had received a COVID-19 vaccination, while those who had not been vaccinated were seated in socially distanced “unvaccinated” sections. Other perks for vaccinated fans included access to special sections in the Mariners’ stadium, including a space next to the bullpen in center field and a terrace above left field.

“Some places, they say, ‘Well, [unvaccinated fans] can come to the sporting event, but we have a special seating section in the upper deck, and the hot dog guy doesn’t go there. So, you can go to the ballgame, but you get the worst seat and no hot dogs and no beer, etc.’ But that’s what we’ve done.”

Rickards said that there are major questions about why so much institutional pressure is being brought to bear to enforce blanket COVID-19 vaccinations, pointing out that there has been serious discussion in the United States about potentially needing a vaccine passport for interstate transportation.

He asked, “Is it about pharmaceutical company profits? Is it about basically using COVID vaccination as a handle for a national ID system?”

On Aug. 28, former New York Times journalist and author Alex Berenson, who is a noted critic of COVID-19 vaccine mandates and lockdowns, was permanently suspended from Twitter after posting: “It doesn’t stop infection. Or transmission. Don’t think of it as a vaccine. Think of it—at best—as a therapeutic with a limited window of efficacy and terrible side effect profile that must be dosed IN ADVANCE OF ILLNESS. And we want to mandate it? Insanity.”

Rickards considers that available COVID-19 treatments commonly referred to as vaccines are, by definition, not actually vaccines.

In his book, Rickards cites Dr. Jay Bhattacharya, professor of medicine at Stanford University, who previously said, “There aren’t any vaccines for human coronaviruses … We don’t have a single vaccine for any of them.”

“Dr. Bhattacharya makes a point that is often lost in the Wall Street chatter and hype about ‘silver bullets’ and ‘miracle drugs,’” Rickards writes.

The Centers for Disease Control and Prevention (CDC) and other health agencies have said that COVID-19 vaccines “are safe and effective” after clinical trials and say that side effects are rare. CDC Director Dr. Rochelle Walenksy and others have cited studies saying that the vaccines don’t necessarily prevent transmission of COVID-19, but have stated that the shots limit the severity of the illness.

The CDC, on its website, also says that mRNA vaccines, such as Pfizer-BioNTech and Moderna, are considered vaccines.

“mRNA vaccines, such as Pfizer-BioNTech and Moderna, work differently than other types of vaccines, but they still trigger an immune response inside your body. This type of vaccine is new, but research and development on it has been under way for decades,” it states.

Pfizer and Moderna did not return requests for comment.

Berenson, the former New York Times journalist, also hinted that he will be filing a lawsuit related to his suspension from Twitter, writing on his Substack page, “I can’t wait to hear what a jury will make of this.”

Prior to his Twitter suspension, Berenson had also posted tweets about university COVID-19 vaccine mandates. In July, after a federal judge rejected a request by eight Indiana University students to block the university’s requirement that students be vaccinated against COVID-19 or receive an exemption, Berenson noted in a tweet, “Another court ruling in favor of vaccine mandates/quasi-mandates – this time for a public university.”

Later, in August, Supreme Court Justice Amy Coney Barrett refused an emergency request from the eight students to block Indiana University’s COVID-19 vaccine mandate. The students had argued that they “have a constitutional right to bodily integrity, autonomy, and of medical treatment choice in the context of a vaccination mandate.”

Regarding university COVID-19 vaccine mandates, Rickards said: “Basically the entire class, the entering or returning class of 2021, is being told, ‘you can’t go back to school without a vaccine.’ By the way, [these students] are college kids, you know they’re 18, 19, 20 years old. They’re the least vulnerable [to COVID-19] other than children.”

The author, who completed his undergraduate studies in the 1970s, said that those who are older statistically have different risk calculations with respect to COVID-19 vaccination than university students.

“My chance of a severe case of COVID is much higher … Statistically that’s just true, and I’ll take my chance with the vaccine, but 18- and 19-year-olds have no business taking the vaccine because the trade-off is different, your risk of a serious case is very low and [of] side effects—they could be a lifetime—are high,” he said.

Rickards predicted that there will likely be more cases similar to the lawsuit brought by Indiana University students in the near future, with “inconsistent decisions” in various courts and “one or more landmark rulings over the course of the next year.”

“The history of cases like this when you get back to other vaccines … in terms of public school admissions and so forth, has tended to favor the vaccine requirement. Not in every case,” he said. “I’m not highly optimistic that the courts are going to come down on the side of the individuals in these cases. But again, these cases have a long way to go.”

Rickards noted that, in addition to vaccine mandates, “mask mandates are back in a lot of places” in the United States, and are impacting interstate travel.

“I live in Portsmouth, New Hampshire, and our motto here is ‘Live Free or Die,’” Rickards said, referencing the state’s motto, which was originally written by John Stark, a Continental Army general during the American Revolution. “And I’ll give the [New Hampshire] governor [Chris Sununu] a lot of credit. So far we’re standing up for that … right now there’s no mask mandate, there’s no vaccination requirement for indoor dining.”

In other parts of the country, however, mask mandates are in effect. Rickards described a recent mask-related standoff that he experienced in Los Angeles: After landing at Los Angeles International Airport, Rickards rented a car to drive to his hotel, and pulled up to an airport parking lot checkpoint, staffed by an attendant who would open a gate to let Rickards drive the rental car out of the parking lot.

Rickards was carrying a mask in his pocket, and put it on to comply with the attendant’s demand.

“He opened the gate, and I ripped it off before I drove through to let him know what I thought of it,” Rickards said.

He stated that varying and inconsistent pandemic-related rules across the United States discourage travel and create an “enormous” economic headwind.

“There are all kinds of constitutional and curtailment-of-liberty-and-freedom-of-choice issues all around this,” Rickards said, referring to pandemic-related mandates. “But if you just want to convert it to dollars and cents, this hurts business, travel, leisure, resorts, restaurants, cruise ships, airlines, hotels, you name it. It’s hurting all of it.”