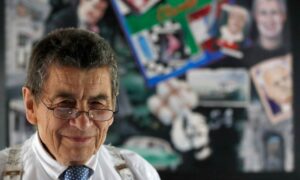 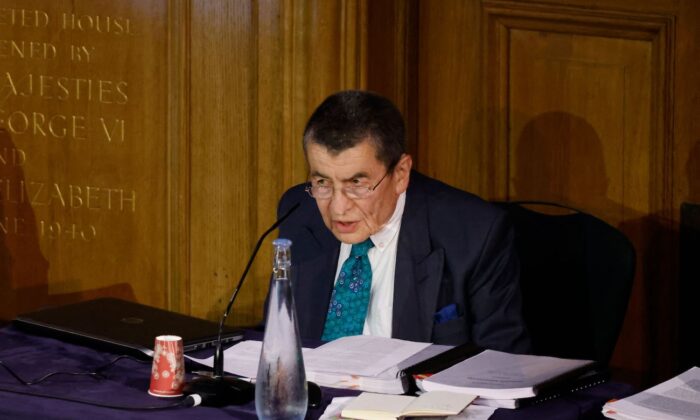 Geoffrey Nice gives the opening address on the first day of hearings at the Uyghur Tribunal, a panel of UK-based lawyers and rights experts investigating alleged abuses against Uyghurs in China, in London on June 4, 2021. (Tolga Akmen/AFP via Getty Images)
China Human Rights

The final hearings of a tribunal set up to assess whether the Chinese regime is committing genocide in Xinjiang against Uyghurs and other ethnic minorities concluded in London on Sept. 13, with a nonbinding verdict expected in December.

The Uyghur Tribunal, which ran from Sept. 10 to 13 in London, was chaired by prominent British lawyer Geoffrey Nice and came after an initial set of hearings in June that saw witnesses recount their experiences of torture and abuse in the region’s sprawling network of detention camps.

The nine-member tribunal, made up of academics, business people, and lawyers, doesn’t have the backing of the UK government or the power to prosecute, but organizers hope the independent assessment will push the international community to take action against the Chinese Communist Party (CCP) for its treatment of Uyghurs, the majority of whom practice Islam.

“The tribunal’s decision will not have legal weight, but moral weight,” expert witness Andrew Khoo said on Sept. 13.

Nine witnesses and 28 experts testified in this month’s hearings, including former detainee Erbakit Otarbay, who said she and other inmates were physically abused during her 98 days in a detention camp in Xinjiang.

Her account echoes that of many former Uyghur detainees. Firsthand accounts described to The Epoch Times have revealed attempts by authorities to strip Uyghur detainees of their culture and language—as the Party did to the Chinese and the Tibetans during the Cultural Revolution—forcing them to denounce their faith and pledge loyalty to the CCP and its leader. If detainees failed to follow orders, they would be subject to several forms of torture as punishment.

CCP officials say the mass detentions among the Uyghur population are part of measures to crack down on terrorism, religious extremism, and separatism in the country. They have referred to “extremist threats” in order to justify strict surveillance and clampdown on Uyghurs and other ethnic minority groups in the Xinjiang region.

Uyghurs in the region are being detained for reasons such as contacting friends or relatives abroad, traveling to a foreign country, growing beards, or attending religious gatherings, Uyghurs who have family members in the camps have told The Epoch Times.

It’s estimated that at least 1 million Uyghurs are being held in the region’s network of mass internment camps.

Ethnic Kazakh Gulzire Alwuqanqizi also testified, recounting how she was forced to take pills, undergo medical checks, had blood samples taken, and was injected with unknown substances. Since then, she is no longer fertile, she told the tribunal.

“Every time I went to [a new] camp they drew blood. There was no logic to it. Sometimes they would take blood from me, or not, or a group of students. It didn’t make sense,” she told the panel. “How dare they break our humanity and our dignity.”

The London tribunal, funded by the World Uyghur Congress and individual donations, is the latest attempt to hold the CCP to account for its treatment of Uyghurs and other ethnic minorities in the Xinjiang region.

The United States has declared that Beijing’s policies against Uyghurs and other groups amount to genocide and crimes against humanity. China denies the accusations of genocide and forced labor in the region.

The Uyghur Tribunal is expected to announce in December whether China is committing genocide or crimes against humanity, Radio Free Asia reported.