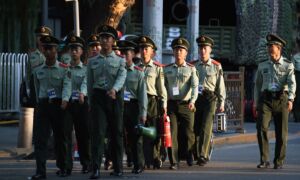 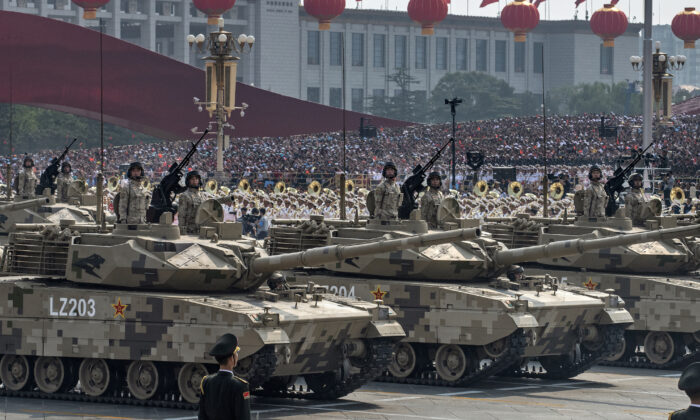 Chinese soldiers sit atop tanks as they drive in a parade to celebrate the 70th anniversary of the Communist Party’s takeover of China, at Tiananmen Square in Beijing on Oct. 1, 2019. (Kevin Frayer/Getty Images)
Thinking About China

As Beijing celebrates the 70th anniversary of founding of Communist China, the Party has been unimaginably tragic and cruel to its people

Self-Flattery and Delusion on Parade

The celebration is notable, however, for its well-planned military parade, coordinated by Party members and intended to flatter the CCP, especially the top leadership. Consisting of 15,000 troops, 160 or more military aircraft and almost 600 weapon systems from 59 military units, as well as its strategic nuclear missile systems and the very dangerous DF-41 Intercontinental Ballistic Missile, the CCP’s show off of military hardware was actually worthy of the 20th century’s most dastardly totalitarian regimes.

But is this 70th anniversary, which commemorates the imposition of “socialism with Chinese characteristics” upon its 1.4 billion subjects, really worth celebrating?

A China Stripped of Its Cultural Heritage

Despite the CCP’s claim that its communist system has “Chinese characteristics,” the reality is much different. The communist Chinese regime bears more similarities with the totalitarian systems of Soviet Russia and Nazi Germany than with traditional China. Even down to the personalization of the state in a cult-like political figure, China resembles European totalitarianism, or even a theocratic dictatorship, more than any sort of traditional Chinese government.

Sadly, since the Cultural Revolution, Chinese society has seen its cultural roots and heritage stripped from it, decade after decade. In his war against the nationalists and then later, against his own people, Mao chose communism as his guiding ideology, and spared no atrocity in order to destroy those who resisted him.

In fact, the drab, gray Mao jacket that Xi Jinping symbolically wore as he watched his parade pass by, was really the only “Chinese characteristic” differentiating today’s China from the 20th century’s tyrannical regimes. Evidently, the ancient, libertarian wisdom of Chinese philosopher Lao-tzu, who wisely advised, “govern a great country as you would cook a small fish” (in other words, don’t overdo it), is lost on the leaders of the CCP.

The Failed Hope of Sun Yat-sen

Recall that it was Chinese nationalist and American ally Sun Yat-sen who sought to modernize the country not by discarding the richness of Chinese culture the way Mao and the communists ended up doing, but by reviving and restoring it. In that spirit and in his respect for his nation’s ancient society, Sun wished to move all of China forward, without sacrificing its cultural soul.

Unfortunately, China saw only tragedy after tragedy and atrocity after atrocity over the next several decades, from the Cultural Revolution to the one-child policy to massive dislocation of people and the institution of slave labor. Throughout its existence, the CCP has leveraged the most destructive and inhumane of Western ideologies to rule with an iron fist and cut out cultural norms and traditions from Chinese society.

Consider China’s Foreign Minister Wang Yi’s assessment of China and its position today. In the Communist Party publication People’s Daily, Wang said China’s relations with the world had seen historic changes over the past 70 years, with its global standing elevated to a new high and its diplomatic activism widely recognized.

Such is the language of China’s new, robust nationalism. Today, China is a hyper-nationalist nation with global ambitions. And it’s not because China considers itself the vanguard of the proletariat, either. The religious zeal for international communism—was once a big deal among the intellectual elites of the world—has been long dead, well before the fall of the Soviet Union in 1991.

No, according to China’s highest-ranking diplomat Yang Jiechi, China’s ambitions are as militaristic as they come:

“Our determination and resolve are as firm as iron when it comes to defending our national interests and dignity on issues about Taiwan, maritime affairs, Xinjiang, Tibet, Hong Kong as well as trade rifts. No one should expect China to swallow the bitter fruit that would damage our own interests.”

Exactly whose interests is Yang referring to? The CCP’s or China’s? The two are almost mutually exclusive and always have been. In the 1950s, ‘60s, and ‘70s, 50 million or so Chinese lost their lives to Mao’s “Great Leap Forward,” his Cultural Revolution, and the resultant famines and violence that came of them.

The true number of lives destroyed at the hands of the CCP is probably even higher. The point, however, couldn’t be clearer. That which benefits the CCP usually does not benefit the people of China.

In short, China is marking the 70th anniversary of its adoption of the absolute worst idea from the West and then calling it a Chinese idea. It’s as if the CCP can’t admit that communism is a Western idea because it needs to condemn the West for humiliating China in the 19th century and threatening it in the 21st.

Of course, that outrageous claim is contradicted by the hundreds of billions of dollars of direct investment that the West, including America, has put into China over the past 40 years. It’s not the West that’s really hurting China today, it’s the CCP.

What western power, or combination of them, could turn China into the mass-murdering, soul-crushing totalitarian state that it has become?

What foreign enemy could succeed so completely in debasing the country’s very natural existence, so that much of it has been reduced to a toxic wasteland, void of life, indeed, dangerous to life?

No, the more accurate and desperately sad reality is that October 2019 marks the 102nd anniversary of a Western-born ideological contagion that began in Russia in 1917 and has, so far, led to over 100 million deaths in China and the lifelong misery of billions more people worldwide.

In human costs and the vast destruction of its culture and the environment, the injustices of Western colonialism in China pale in comparison to what the CCP has done and continues to do. May the end of the CCP come soon; very, very soon.