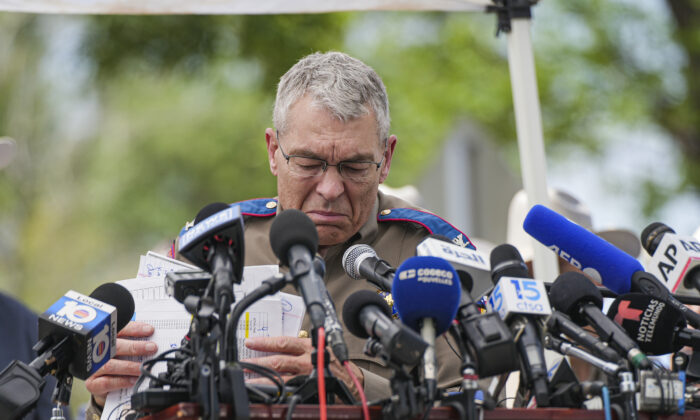 Texas Department of Public Safety Director Steve McCraw provides an update on details of the May 24 mass shooting in which 19 children and two adults were killed at Robb Elementary School, in Uvalde, Texas, on May 27, 2022. (Charlotte Cuthbertson/The Epoch Times)
Texas

The report on the mass shooting at Robb Elementary School in Uvalde, Texas, released by the Texas state House of Representatives on July 17 shot down an account that a local police officer confronted the shooter and thus had a chance to bring him down prior to his entering the school.

The July 6 report by Advanced Law Enforcement Rapid Response Training (ALERRT) Center at Texas State University said that a Uvalde police officer “observed the suspect carrying a rifle outside the west hall entry” to the building where he eventually entered at Robb Elementary School.

“The officer, armed with a rifle, asked his supervisor for permission to shoot the suspect. However, the supervisor either did not hear or responded too late,” according to the report. “The officer turned to get confirmation from his supervisor, and when he turned back to address the suspect, he had entered the west hallway unabated.”

The narrative was later rejected by Uvalde Mayor Don McLaughlin. McLaughlin said in a statement to news outlets: “No Uvalde police officers had any opportunity to take a shot at the gunman.”

The latest findings confirmed McLaughlin’s statement back then. It turned out that it was the school coach that the officer spotted on scene, according to the Texas joint committee report.

“Coach Gonzales had been on his way to the parking lot to leave the school after his lunch duty when he heard a gunshot and then [another coach’s] report about the attacker over the radio. He told the children around him to run away,” the committee report said.

The officer that hesitated to take a shot at the suspect (whose name was not identified in the report) and his sergeant, verified as Daniel Coronado, both testified that the training center account was false.

Coronado asserted to the committee that he heard the officer’s request, but did not give a quick nod because there were children present.

“He [Coronado] considered the risk of shooting a child, and he quickly recalled his training that officers are responsible for every round that goes downrange,” according to the committee’s report.

The 77-page report, released on July 17, stated there were systemic failures on behalf of the approximately 400 enforcement officers who responded to the rampage on May 24 that finally took the lives of 19 students and two teachers at the school in Uvalde.

“There is no one to whom we can attribute malice or ill motives. Instead, we found systemic failures and egregiously poor decision making,” the report said, noting “shortcomings and failures of the Uvalde Consolidated Independent School District [CISD] and of various agencies and officers of law enforcement” and “an overall lackadaisical approach.”

The claims echoed the statement from the director of the Texas Department of Public Safety (DPS), which said that there was evidence suggesting the police response to the mass shooting at the Uvalde school was an “abject failure.”

“However, we do know this: There’s compelling evidence that the law enforcement response to the attack at Robb Elementary was an abject failure and antithetical to everything we’ve learned over the last two decades since the Columbine massacre [in 1999],” DPS Director Steven McCraw told a Texas Senate panel.