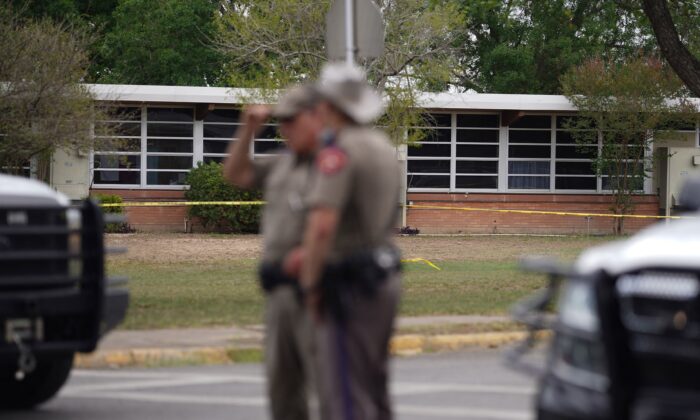 State troopers stand outside of Robb Elementary School in Uvalde, Texas, on May 24, 2022. (Alison Dinner/AFP via Getty Images)
Texas

The law enforcement officers who responded to the May mass shooting at a Texas elementary school could have quickly stopped the shooter, according to an after-action report released on July 6.

An officer who could have fired a rifle at the shooter before he entered the school should have done so without waiting for clearance from a supervisor, the report says.

The failures to stop the shooter, identified by authorities as Salvador Ramos, left Ramos as the only armed person inside two adjoining classrooms at Robb Elementary School for over one hour.

The May 24 shooting left 19 students and two teachers dead. Another 17 were wounded.

Experts with the Advanced Law Enforcement Rapid Response Training (ALERRT) Center at Texas State University compiled the report based on video footage from inside the school, body camera video, radio logs, testimony of officers who responded, and statements from investigators. ALERRT experts were briefed by an officer who is investigating the response to the shooting. They also conducted a walkthrough of the crime scene. Authors cautioned that the report is subject to changes as new evidence emerges.

ALERRT trains law enforcement across the nation in responding to active shooter situations. It regularly evaluates the outcomes of actual situations in order to better prepare officers.

Ramos crashed his vehicle near the school and walked onto campus before heading to a doorway.

An Uvalde school district officer drove onto campus as Ramos was in the parking lot, but did not see him.

ALERRT experts said the officer should have driven more slowly or parked his car at the edge of campus and approached on foot. Either way, he might have spotted Ramos and engaged him before he entered the building.

An Uvalde police officer who did spot the suspect carrying a rifle prior to the suspect entering the building, meanwhile, probably should have fired without asking for permission to shoot, according to the report.

“The officer was justified in using deadly force to stop the attacker,” the report says, citing Texas penal code.

With the sound of gunshots—Ramos fired multiple rounds before entering the building—and the sight of an armed individual approaching the building, a “reasonable officer would conclude in this case, based upon the totality of the circumstances, that use of deadly force was warranted,” the experts said.

The officer was situated 148 yards from the door that Ramos used to enter the building.

The officer turned to his supervisor to get a response. By the time he turned back, Ramos had entered the building.

If the officer was unsure he could hit the target, he shouldn’t have fired, according to the report.

It also noted that a door that a teacher had propped open but closed before Ramos arrived did not lock, but said Ramos would likely still have been able to enter because the glass in the door was not ballistic glass.

Once Ramos entered the building at approximately 11:33 a.m. and the set of classrooms, a group of responding officers quickly approached the doors to the classrooms. But Ramos fired at the group, causing the group to retreat.

Active shooter training teaches stopping killing is the most important priority, ahead of the safety of officers.

“This ordering means that we expect officers to assume risk to save innocent lives. Responding to an active shooter is a dangerous task. There is a chance that officers will be shot, injured, or even killed while responding. This is something that every officer should be acutely aware of when they become a law enforcement officer,” the report says.

Instead of retreating, the officers could have chosen to maintain their position or push forward to be in a better position to return fire without striking students or teachers, the experts said.

“Maintaining position or even pushing forward to a better spot to deliver accurate return fire would have undoubtedly been dangerous, and there would have been a high probability that some of the officers would have been shot or even killed. However, the officers also would likely have been able to stop the attacker and then focus on getting immediate medical care to the wounded,” the report said.

A lull in gunfire did not last long. The suspect fired approximately 11 rounds at 11:38 a.m. and continued firing periodically. It was later revealed that 911 calls to dispatchers came from students inside the room, and gunshots could be heard during the time between the retreat and the breach.

During that time, officers should have quickly formulated an action plan, which would trigger once more gunshots were heard, the experts said. The plan should have focused on neutralizing the attacker. But, instead, officers on the scene treated the active shooter situation as a hostage barricade, despite evidence more killing was occurring.

Each time shots could be heard, “the situation had gone active, and the immediate action plan should have been triggered because it was reasonable to believe that people were being killed,” the report states.

According to Steve McCraw, the director of the Texas Department of Public Safety, Uvalde school district Police Chief Pete Arredondo was in control of the scene and made the decision not to try to confront the attacker.

Arredondo called for additional assistance as early as 11:38 a.m., including SWAT/tactical teams, according to the ALERRT experts. But given the equipment the officers already had or soon received, including firearms and ballistic shields, a breach shouldn’t have taken anywhere near as long, they said. The evidence thus far points to the classroom doors being unlocked, contradicting early law enforcement statements that officers were waiting for a key.

Arredondo, the report revealed, spoke with an Uvalde police officer from 12:21 p.m. until 12:34 p.m. about tactical options while both were in a nearby hallway. The discussion included discussion of who had keys and whether the door was locked, as well as whether children and teachers were dying or dead.

Shortly after the discussion ended, Arredondo started to try to negotiate with Ramos, speaking in both English and Spanish. When that apparently failed, he asked for more keys.

When the team finally entered the room, they quickly killed Ramos.

Arredondo’s lawyer and the school district’s police division did not return requests for comment on the report. Arredondo has previously defended the actions taken in response to the shooting.

McCraw, on the other hand, said in June that officers could have stopped Ramos three minutes after he entered the school.