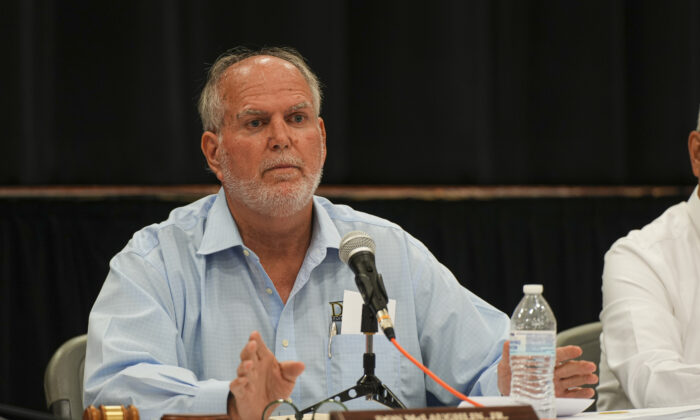 The mayor of Uvalde, Texas, is disputing a report that says a police officer had an early opportunity to shoot the 18-year-old gunman who killed 19 children and two teachers inside an elementary school on May 24.

“No Uvalde police department officer saw the shooter on May 24 prior to him entering the school,” Mayor Don McLaughlin said in a statement to news outlets. “No Uvalde police officers had any opportunity to take a shot at the gunman.”

Experts with the Advanced Law Enforcement Rapid Response Training (ALERRT) Center at Texas State University said in a report published on July 6 that an officer with the Uvalde Police Department “observed the suspect carrying a rifle outside the west hall entry” to the building he eventually entered at Robb Elementary School.

“The officer, armed with a rifle, asked his supervisor for permission to shoot the suspect. However, the supervisor either did not hear or responded too late,” according to the report. “The officer turned to get confirmation from his supervisor and when he turned back to address the suspect, he had entered the west hallway unabated.”

The revelation was cited in an officer statement relayed to the experts by an unnamed officer who has been part of the investigation into the law enforcement response to the shooting.

McLaughlin, though, said the officer didn’t spot the shooter.

“A Uvalde Police Department officer saw someone outside, but was unsure of who he saw and observed children in the area as well. Ultimately, it was a coach with children on the playground, not the shooter,” he said.

Neither ALERRT nor the Uvalde Police Department (UPD) responded to a request for comment.

Ricardo Rios, chief deputy of the Zavala County Sheriff’s Office, previously said that multiple officers could have fired at the shooter but chose not to because there were kids playing nearby and they feared striking the kids.

The experts at ALERRT, which trains officers around the nation in how to respond effectively to active shooter situations, said that the officer who observed the shooter outside “was justified in using deadly force to stop the attacker,” noting Texas’s penal code that says an individual is justified in using such force when they reasonably believe it would stop murder and other serious crimes.

“In this instance, the UPD officer would have heard gunshots and/or reports of gunshots and observed an individual approaching the school building armed with a rifle. A reasonable officer would conclude in this case, based upon the totality of the circumstances, that use of deadly force was warranted,” the report states.

The officer was approximately 148 yards from the door to the building that the shooter eventually used to enter. That distance “is well within the effective range” of an AR-15, the type of gun the officer was armed with, the experts said.

“The officer did comment that he was concerned that if he missed his shot, the rounds could have penetrated the school and injured students. We also note that current State of Texas standards for patrol rifle qualifications do not require officers to fire their rifles from more than 100 yards away from the target. It is, therefore, possible that the officer had never fired his rifle at a target that was that far away,” the experts also said.

“Ultimately, the decision to use deadly force always lies with the officer who will use the force. If the officer was not confident that he could both hit his target and of his backdrop if he missed, he should not have fired.”