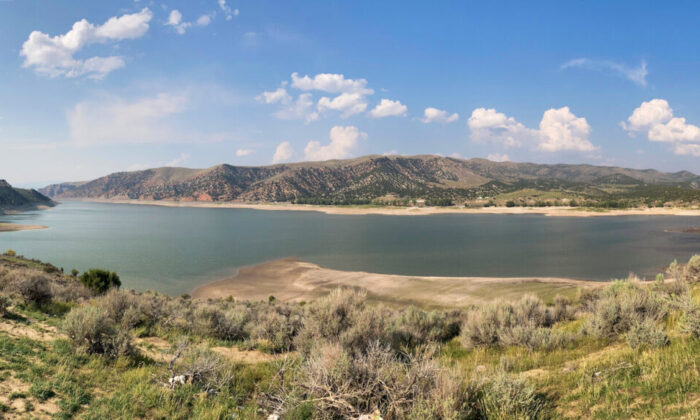 The Echo Reservoir in Utah is roughly at half capacity due to a severe ongoing drought that has affected the entire state. (Allan Stein/Epoch Times)
Local News

To say that Utah’s water shortage in 2021 is severe doesn’t do justice to the stark reality that many of the state’s lakes, creeks, and reservoirs are literally drying up.

And unless nature cooperates soon, some of these once-full bodies of potable water will resemble the desert areas that surround them.

At Echo Reservoir off Route 80 in central Utah, the 1,394-acre dam and reservoir sit at about 14 percent of total capacity, according to the Utah Division of Drinking Water (DDW).

While its meandering shoreline has been receding for months, parts of the reservoir are now filled with algal blooms caused by stagnant, shallow water.

“This has been the worst drought in several years,” said Ryan Dearing, the DDW’s emergency response coordinator. “It’s certainly the worst one we’ve had in 20 to 25 years.”

In a normal precipitation cycle, the region will experience a dry year followed by a wet year. But this doesn’t appear to be a normal weather cycle, Dearing said.

Dearing told The Epoch Times that over the past several years, the winters have become increasingly drier, depleting the snowpack that replenishes water supplies during the April melt.

As it stands now, 32 of Utah’s 42 reservoirs are below 55 percent of total capacity.

The situation serves as a parched reminder of just how reliant Utah communities are on the natural water table, not just for drinking water but as sources of recreation and tourism—two key economic drivers.

“We’ve been monitoring drought conditions carefully and had hoped to see significant improvement from winter storms,” Cox said in a statement.

“Unfortunately, we have not received enough snow to offset the dry conditions. I ask Utahns to evaluate their water use and find ways to save, not only because of current drought conditions but also because we live in one of the driest states in the nation,” he said.

In wetter years, Echo Reservoir teemed with tourists and recreation seekers—though less so today as the banks of the reservoir have dried up and pulled back.

The situation hasn’t been much better at Scofield Reservoir—now 27 percent full—a 2,815-acre reservoir impounded by the Scofield Dam in Carbon County in central Utah.

In the nearby town of Scofield, which has a population of 25, residents’ drinking water comes from a nearby spring that supplies a municipal water tank.

Dearing said the worsening drought and increased consumption by seasonal tourists were the main reasons for the brief water emergency.

“They brought in bottled water and a 6,000-gallon water truck to fill containers,” Dearing said. “Ordinarily, these are simple problems that are dealt with.”

According to the DDW, this winter’s snowpack was about 70 percent of the average for the year. And there’s little chance that nature will deliver the remaining 30 percent any time soon.

In the meantime, all of the state’s 29 counties are experiencing drought, and in mid-March, four of Utah’s top 42 reservoirs were less than 20 percent full.

In the town of Hyde Park that has a population of 4,700, Mayor Charles Wheeler said the town in northern Utah “almost ran out” of water recently.

“At the time of crisis, we had been running our main well pump 24/7 and utilizing the spring flow entirely,” Wheeler told The Epoch Times. “We recognized that if the trend each day at that time were to continue, Hyde Park’s Upper water tank would empty completely within about 72 hours, leaving the upper zones in the city without water pressure and a part of the city dry.”

Wheeler said the city sent a message to residents warning that without a change in consumption habits, the city would run out of water.

“We had to ask our citizens to reduce their use. We asked them to cut use by 50 percent—they did, and enough have continued to conserve that our situation has stabilized,” he said.

The city also has added a new water line from a reserve pump to be better able to meet the demand for water. This was accomplished “without needing to obtain it from outside sources,” Wheeler said.

“We recently started construction of additional water storage by adding a new 2 million gallon tank to our distribution system along with the pipeline and pumps needed to supplement our present infrastructure and handle the pressures of growth,” he added.

In the tiny town of Echo, which has a population of 49, an elderly resident lamented the statewide water shortage and the restrictions that have followed.

“I saw at least one tanker truck and they said it was going to last us 10 days,” said the resident, who asked to remain anonymous. “A lot of people aren’t taking as many showers. Me—I’ve been taking sponge baths for a month.”