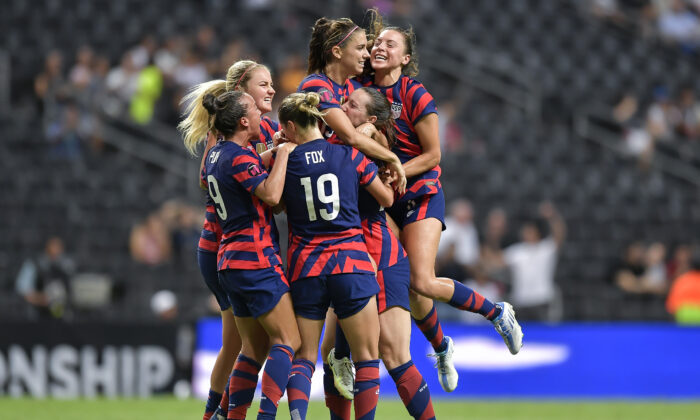 Alex Morgan of the U.S. national soccer team celebrates with teammates after scoring their first goal during the championship match between United States and Canada as part of the 2022 Concacaf W Championship at BBVA Stadium, in Monterrey, Mexico, on July 18, 2022. (Azael Rodriguez/Getty Images)
Soccer

World No. 1-ranked United States Women’s National Team secured a slot in the 2024 Olympics in Paris with a 1–0 victory over Canada in the finals of the CONCACAF W Championship (Confederation of North, Central America, and Caribbean Association Football region of FIFA) on July 18 in Monterrey, Mexico before 17,000 fans.

All of the top four teams, including third-place winner Jamaica with a 1–0 victory over Costa Rica, also qualified for next year’s W World Cup.

Alex Morgan scored on a penalty kick in the second half to avenge the team’s semi-final loss at the 2020 Tokyo Olympics—played last year due to Covid lockdowns—where Canada defeated the U.S for the first time in 20 years, 1–0, and went on to win the the gold medal.

The U. S. is currently 33–0 in World Cup or Olympic qualifying matches since losing to Mexico 2–1 during qualifiers for the 2011 World Cup.

This year’s team has only five returning players who started last year against Canada in the Olympic semifinal, which was the last meeting between the teams—including Morgan, Becky Sauerbrunn, Lindsey Horan, Rose Lavelle, and goalie Alyssa Naeher,

Coach Vlatko Andonovski adjusted the starting line-up in every game of this tournament, likely seeking good chemistry for future matches, while keeping players fresh for the final. Horan and Smith were the only players to start every game.

Andonovski chose a much younger side this year with overall better team speed. There were just three players with over 100 caps: forward Morgan, midfielder Horan, and central defender captain Becky Sauerbrunn, who made her 207th international appearance to place ninth on the all-time list for the U.S. Meanwhile, Emily Fox, Sofia Huerta, and Alana Cook all have fewer than 20 appearances.

“It is very obvious that the team is significantly younger than the previous time we played Canada,” said Andonovski.

The Americans have nine different goal scorers compared to eight for Canada—three of whom have multiple goals in this tournament, including Morgan with two, Sophia Smith with two, and Kristie Mewis also with two. The Canadians have Julia Grosso with three goals and Jessie Fleming, also with three.

Morgan made her fourth start of the tournament, capturing her 196th cap and moving her past Shannon Boxx to 13th in total caps for the U.S.

The 33-year-old Morgan by far leads in goals scored with 117 and could soon earn even more caps and goals.

Morgan missed most of 2020 while giving birth to her daughter, Charlie Elena Carrasco, on May 7. She had married former LA Galaxy player Servando Carrasco in 2014 after having met while playing college soccer at University of California–Berkeley.

On Jan. 24, 2016, Morgan received the key to the city of her hometown Diamond Bar, in southeast Los Angeles County, bordering Orange County where she also played youth soccer.

The striker returned to southern California as the captain of the San Diego Wave FC of the National Women’s Soccer League in mid-December 2021 following a trade from Orlando, with a record $275,000 in allocation money.

“Very happy how she handled the whole [comeback] situation,” said Andonovski in praise of Morgan. “Alex is a better player. She doesn’t want to stop growing [and] developing.”

The first half of Monday’s game was fairly even except the early and late stages, beginning in the first minute when Mallory Pugh broke the right side of the Canadian defense, forcing a big save by goalkeeper Kailen Sheridan. In the latter stages, the U.S. created numerous opportunities, edging slightly in possession of 55 percent and doubling the total number of shots—10 to Canada’s four—with a three to two advantage on goal.

In the 14th minute, Emily Fox’s shot from outside of the box was blocked, followed by Horan with a half-volley that just barely missed to the right.

Sheridan made another excellent save in the 45th on Sophia Smith’s attempt to score near the goal line from a Kadeisha Buchanan pass.

Smith took another shot in the 64th minute of the second half that missed wide. The Americans would finish with 17 total shots versus 11 for Canada—with a six to five advantage on goal.

The U.S. didn’t score until the 78th minute as Rose Lavelle was taken down in the box—resulting in Morgan’s penalty kick.

Canada desperately attempted to tie late in the match but missed several chances, including a header that went wide from Jordyn Huitema.

The United States has qualified for every World Cup since its commencement in 1991, winning a record four titles, including the last two in 2015 and 2019.