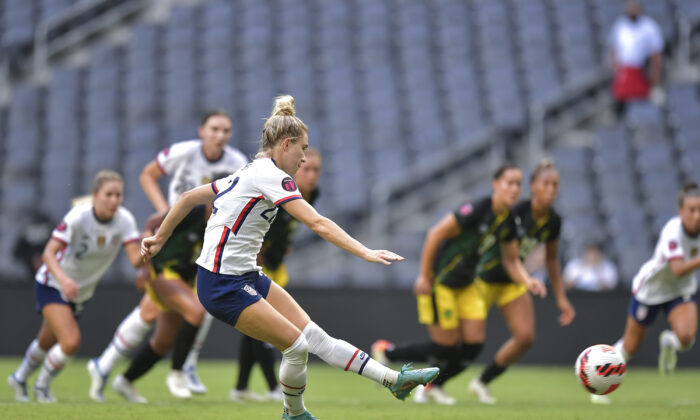 Kristie Mewis of USA kicks a penalty and scores her team's fourth goal during the match between Jamaica and United States as part of the 2022 Concacaf W Championship at BBVA Stadium, in Monterrey, Mexico, on July 07, 2022. (Azael Rodriguez/Getty Images)
Soccer

The U.S. Women’s National Team (USWNT) has qualified for the 2023 FIFA World Cup with a commanding win in Group A of the CONCACAF Championship over Jamaica 5–0 Thursday in Monterrey, Mexico.

Sophia Smith shined for the Stars and Stripes with the first two goals, while Rose Lavelle, Kristie Mewis, and Trinity Rodman added goals in their second shutout win of the tournament with five new starters, including goalkeeper Alyssa Naeher.

The World No. 1 ranked Americans are the 12th team to secure a World Cup berth, as the top two finishers in the two groups of four teams in the tournament are guaranteed into next year’s Cup competition from July 20 to Aug. 20, 2023, hosted by Australia and New Zealand.

Haiti’s 3–0 victory over Mexico sealed the automatic qualification for the U.S., while a third match-up remains against Mexico in the final round of group play on Monday before semi-final action.

The result came on the anniversary of the USWNT winning its record fourth World Cup title in 2019, when they handily defeated the Netherlands, 2–0, in Lyon, France.

On Oct. 22, FIFA will conduct the largest World Cup Final Draw of 32 teams in Auckland/Tāmaki Makaurau to be played in 10 stadiums.

The Americans sit atop Group A with six of six possible points, while the second place position will also secure a World Cup berth—to be determined in the Haiti-Jamaica matchup on Monday.

Haiti could advance with a draw on goal difference, while Jamaica must win. Mexico must defeat the U.S. for an opportunity, as the third place finisher in each group has a final opportunity for a berth through the 10-team inter-confederation playoff for the final three spots in the World Cup.

The U.S. is the favorite to win the CONCACAF Championship, which earns an automatic bid to the 2024 Paris Olympics, while second and third place finishers will face off next year for the final regional Olympic berth.

USWNT head coach Vlatko Andonovski’s record is 36-2-6 in 44 games, and he started six of the 11 from the first match versus Haiti three days before. He’s likely looking to try various combinations leading to World Cup play as well as keeping players fresh from little rest between games.

It only took until the fifth minute for Smith to score an elite goal from a long pass from defender Naomi Girma from eight yards beyond midfield, finding Smith on the outside right flank.

Smith pushed the bouncing ball forward with speed, then finessed the ball over the charging defender towards center and struck an outside right-footed shot on her third touch that curled back into the side-netting of the left post. Mallory Pugh was in front of goal poaching with her outstretched leg to ensure the shot didn’t go wide.

The speedster Smith has a team high of seven goals in eight games with her third multi-goal game.

“Two great passes to find me. We all wanted to come out and get on the front foot early,” she said.

Smith would follow three minutes later to make it 2–0 from another long pass, this time from defender Sofia Huerta with a high pass that beat the defense outside the right edge of the six-yard box. Smith was able to push a lofted shot over Jamaican goalie, Rebecca Spencer, that crossed the goal line before a defender was able to clear.

“Obviously, being a young player on this team, it can be a little bit intimidating, but I think I’ve found my confidence and I’ve just felt I can be myself on the field,” said Smith, who has eight international goals. “That’s just what I’ve been doing and my team has been super supportive of that.”

The Americans had 68 percent possession with 20 shots, 11 on-goal, against four shots, two on goal from Jamaica. They added a third goal in the 59th minute with Lavelle punching a five-yard shot through the diving Spencer’s right fingertips from a low cross by Ashley Sanchez.

In the 83rd minute, Midge Purce penetrated the Jamaican defense with crafty dribbling through the right side of the box, before being taken down by one of two defenders to gain a penalty.  Mewis would confidently blast the left-footed penalty kick into the right corner netting as the Jamaican keeper dove the other direction.

The 20-year-old daughter of former NBA great Dennis Rodman scored her second international goal in the 86th minute from a cross by Pugh that Rodman rose to volley into the net—just beating Spencer to the ball.

Rodman, an Orange County native, played at Corona Del Mar and JSerra Catholic High Schools and became the youngest player to score for the USWNT in a qualifier for the World Cup or Olympics since 2008, when 19-year-old Tobin Heath scored against Jamaica in an Olympic qualifying event.

A National team rookie, Rodman was named NWSL Rookie of the Year and the NWSL Best XI in 2021 after being drafted second overall by the Washington Spirit.

Before the semi-finals, likely against Group B runner-up, the USWNT will play its final group stage match against hosts Mexico at Estadio Universitario on Monday, July 11 at 7 p.m. PT.