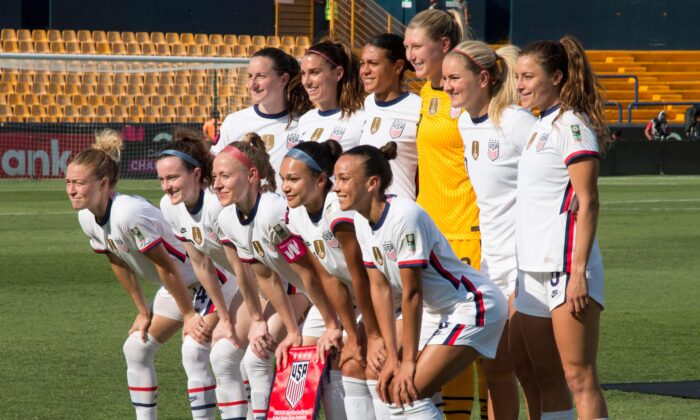 US players pose for a picture before their 2022 Concacaf Women's Championship football match against Costa Rica at the Universitario stadium, in Monterrey, Mexico, on July 14, 2022. (Julio Cesar Aguilar/Getty Images)
Soccer

The Americans will face Canada in the Finals on Monday for a berth into the 2024 Olympics. The United States finished third in last year’s Olympics following a loss to Canada.

The USWNT has been revamped with youth and speed in the past year under Vlatko Andonovski and continues to refine its chemistry ahead of next year’s World Cup.

The USA’s 64 percent possession rarely allowed Costa Rica, who was playing an extreme defensive 4–5–1 lineup, out of their own half.  The Americans took 15 shots, seven on goal, to Costa Rica’s two, with none on goal.

The opening goal came in the 34th minute, beginning from a corner kick from Pugh on the right, finding Andi Sullivan for a volley from the center of the box. A shot attempt by Lindsey Horan spun high off of the left goal-post, then bounced back to the center where Sonnett stretched to poke the ball across the goal in her second attempt from two yards away.

The 28-year-old from Georgia scored her first international goal in her 69th appearance. Sonnett plays for the Washington Spirit in the National Women’s Soccer League (NWSL).

“I think we need to be overall sharper,” said Sonnett. “I don’t think our team is very satisfied with that. There’s a lot that we need to focus on. Overall, I think we’ve competed, and I think we’ve stuck to game plans every single game. How do we put it all together now going forward?”

Veteran forward Alex Morgan scored the second goal from a long pass to Horan, who headed the ball to the center for a left-footed volley by Morgan—however Horan was called for offsides.

“I feel like the way that Vlatko wants us to play, it’s different every game, right?” said the Diamond Bar, Calif. native Morgan. “It depends on if it’s a four-back or a five-back [for the opposition], the way that they pressure—whether inside or outside, the spaces that they give, or the high line or a low line. I think we’ve faced different challenges every game.”

The second goal would come in the 48th minute as Pugh received a back-heel pass from Rose Lavelle in stride through the left-center of the box, for a low left-footed strike that skimmed off of the left thigh of goalkeeper Noelia Bermudez.

“I think pressing is a great opportunity to transition and attack,” said the 24-year-old Pugh who scored her sixth goal of the year and 24th of her career. The Highlands Ranch, Colorado native currently plays for Chicago in the NWSL.

The final goal of the game came in the 90+5th minute by L.A. native 23-year-old Sanchez who entered the game in the second half.

Morgan attempted to turn a long pass to the inside the box that a defender pushed away to the penalty spot for the incoming Sanchez, who immediately took a right-footed blast into the left side-netting for her third international goal, making the final score 3–0.

Born in Pasadena, Sanchez hails from Monrovia, playing youth soccer for Santa Anita SC, Legends FC, and So Cal Blues; she currently also plays in the NWSL for the Washington Spirit.

Costa Rica rested a couple of their top players during the game, in an apparent strategy to win the third place match against Jamaica, as the winner will also gain a berth to the World Cup.

Third-place finishers in the two groups at the W Championship, Panama and Haiti, will also have an opportunity to qualify for the World Cup through an intercontinental playoff in New Zealand in February, 2023.