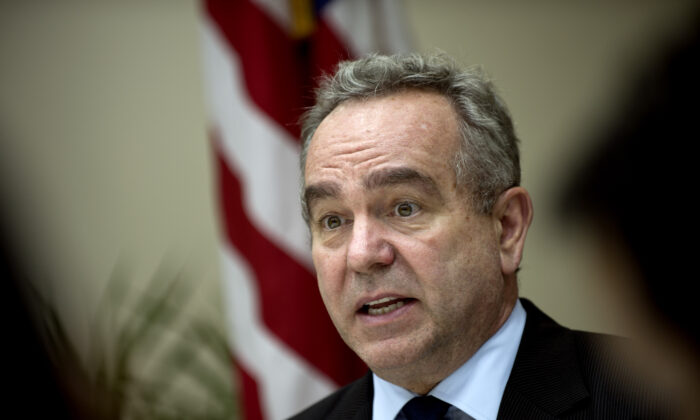 The United States won’t take its eye off the Indo-Pacific region despite the Ukraine crisis, engaging in two theaters simultaneously, as it did during World War II and the Cold War, according to the White House’s Indo-Pacific policy coordinator.

“It’s difficult. It’s expensive. But it is also essential, and I believe that we’re entering a period where that is what will be demanded of the United States and this generation of Americans,” Kurt Campbell, White House coordinator for Indo-Pacific Affairs, said at a Feb. 28 virtual event hosted by the German Marshall Fund of the United States. “There is a deep recognition and intention here inside the government, in the White House, to sustain every element of our engagement in the Indo-Pacific.”

In the long-awaited Indo-Pacific strategy that was released two weeks earlier, the White House deemed the region as critical in countering growing aggression by the regime in Beijing.

Campbell said Washington will show a “determination” to sustain high-level engagement in the coming months. President Joe Biden is set to host a summit of Southeast Asian leaders in Washington in late March. Biden will travel for meetings in the region later in 2022.

The Biden administration also is sending an unofficial delegation of former defense and security officials to visit Taiwan this week, in a show of support for the island that the Chinese regime has long claimed as its own.

“You will see a whole range of activities across the board diplomatically, institutionally,” and on the fronts of economics and trade, Campbell told the panel.

Mira Rapp Hooper, director for Indo-Pacific strategy at the White House National Security Council, said she’s “quite confident” that the war against Ukraine won’t divert U.S. focus away from the region.

She noted that the administration’s Indo-Pacific report was made public “within minutes” after national security adviser Jake Sullivan walked off the podium from a speech warning Americans to leave Ukraine because of the high risk of a Russian attack.

That timing was to “signal both to the region and to the world that no matter what happened in Europe, we had a plan for Asia that was already unfolding,” according to Hooper.

“We had a set of steps that we intended to take in the next 12 to 24 months, no matter what horror was inflicted on the people of Ukraine,” she said, noting that Secretary of State Antony Blinken had made four trips to Asia in the past year, the most recent one during the strategy’s release.

While there’s urgency in both theaters, the aid going to Ukraine is “quite distinct” from that allocated for Indo-Pacific, according to Hooper.

“That does not mean that we will feel moments of resource scarcity,” she said. “But it does mean that we can plan for both simultaneously.”

Campbell said the United States is determined to keep communication lines with the Chinese regime open, despite concerns about its deepening relationship with Moscow.

“We have to acknowledge that there are elements of the Russia–China relationship that are even playing out as we speak, that are worrisome and regrettable, and they have to be watched carefully,” he said. “China is occupying an awkward nexus in which they’re trying to sustain their deep and fundamental relationship with Russia.”

Campbell also made a reference to the “no limits” partnership that the two leaders declared ahead of the Winter Olympics Games’ opening ceremony.

It’s too early to know what position Beijing will ultimately take, according to Campbell, who noted that the circumstances are “difficult” for Beijing at the moment. He said he believes that Beijing authorities have been “concerned” by both the solidarity displayed by the West since the invasion and “the brutality that is playing out every day” in Ukraine.

“It’s clear from our perspective that the association, so public and so deep, between Russia and China is indeed quite uncomfortable right now,” he said.

China has refused to denounce the Russian attack as an invasion and has criticized Western sanctions as ineffective. It abstained from voting last week on a U.N. Security Council resolution condemning Russia’s war on Ukraine. On Feb. 28, China’s foreign ministry told reporters that it would “continue to conduct normal trade cooperation” with Russia, as long as they’re mutually beneficial.

“Our relationship features non-alliance, non-confrontation, and non-targeting of any third party,” said Chinese foreign ministry spokesperson Wang Wenbin, who described the relationship by saying that “China and Russia are comprehensive strategic partners of coordination” in a press briefing.