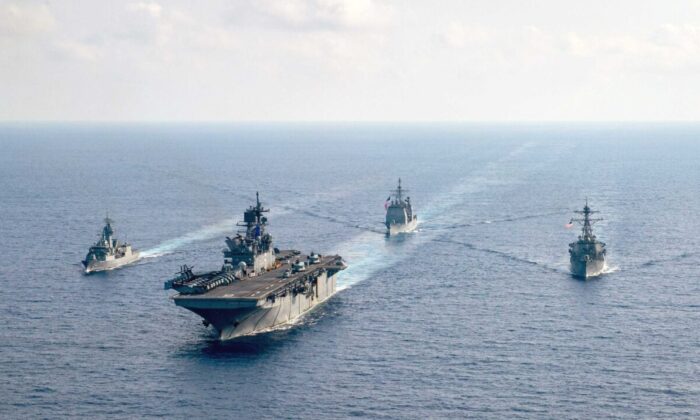 China Aims to Be ‘World’s Most Influential Power,’ US Warns in New Indo-Pacific Strategy

The White House released its long-awaited Indo-Pacific Strategy on Feb. 11, outlining how it plans to deal with the increasing adventurism of the Chinese Communist Party (CCP) and to better secure and improve the region for the international community.

In an associated statement, the White House said that interest in the region from partners and allies is converging and that the realm would play a critical role in the future development of the United States, both economically and diplomatically.

“This convergence in commitment to the region, across oceans and across political-party lines, reflects an undeniable reality: the Indo-Pacific is the most dynamic region in the world, and its future affects people everywhere,” the statement reads.

The strategy, as such, focuses on five key concepts: That the Indo-Pacific ought to remain free and open, connected, prosperous, secure, and resilient.

Across these concepts, the strategy outlines various broad actions that the Biden administration intends to take in the region, including a plethora of investments in democratic institutions abroad and efforts to ensure that commons such as the skies and seas are navigated in accordance with international law.

The strategy centers on the United States’ intent and continued ability to leverage its relationships with partners and allies in the region to counter growing adventurism from the CCP.

“The PRC [People’s Republic of China] is combining its economic, diplomatic, military, and technological might as it pursues a sphere of influence in the Indo-Pacific and seeks to become the world’s most influential power. The PRC’s coercion and aggression spans the globe, but it is most acute in the Indo-Pacific,” the strategy reads.

“Our collective efforts over the next decade will determine whether the PRC succeeds in transforming the rules and norms that have benefitted the Indo-Pacific and the world.”

The statement is important for clearly defining the CCP as the foremost challenge in the region, and stating plainly that the administration considers the competition between the two nations as nothing less than a battle between differing visions for the future of the global order.

A senior administration official said during a Feb. 11 press call, “We recognize the limitations in our ability to change China, and therefore seek to shape the strategic environment around China by building a balance of influences that advances the future we seek while blunting Beijing’s efforts to frustrate U.S. objectives and those of our partners.”

The official pointed out, however, that the document doesn’t cover the administration’s entire China strategy, but presented its vision for further securing the region.

“This is not our China strategy. This—you know, we very clearly identify China as one of the challenges that is—that the region faces and, in particular, the rise of China and China’s much more assertive and aggressive behavior,” the official said.

“But, you know, our China strategy is global in scope. It recognizes the Indo-Pacific as a particularly intense region of competition.”

The strategy further regards the United States’ network of security alliances and partnerships as its “single greatest asymmetric strength,” and says it will expend significant investments to push the so-called Build Back Better World plan, and its goal of global infrastructure development.

Importantly, the strategy also defines the administration’s approach to Taiwan and the ongoing crisis with the CCP over the island’s continued de facto independence. On this issue, the United States appears set to maintain the same policy of strategic ambiguity that it has held for decades. Under this policy, Washington is deliberately vague on whether it would come to the island’s defense in the event of a Chinese invasion.

“We will also work with partners inside and outside of the region to maintain peace and stability in the Taiwan Strait, including by supporting Taiwan’s self-defense capabilities, to ensure an environment in which Taiwan’s future is determined peacefully in accordance with the wishes and best interests of Taiwan’s people,” the strategy reads.

As such, while the administration appears set to increase investments in the Indo-Pacific across the realm of security, diplomacy, and economic development, it won’t pursue changes in the status quo regarding Taiwan.