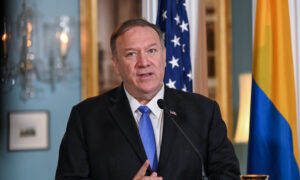 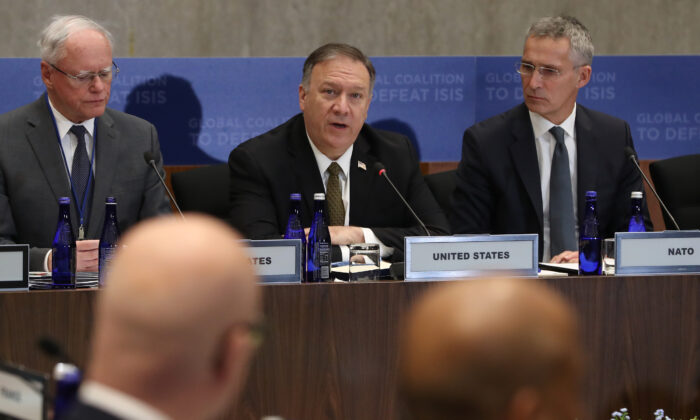 Secretary of State Mike Pompeo (C) speaks during a meeting of the Global Coalition to Defeat ISIS, at the State Department in Washington on Nov. 14, 2019. (Mark Wilson/Getty Images)
US News

US Will Continue to Lead Fight Against ISIS, Pompeo Says

Secretary of State Mike Pompeo affirmed in a Nov. 14 speech that the United States will continue to fight the ISIS terrorist group, noting that they’re watching the space previously occupied by the caliphate “like a hawk.” He framed the battle as “a test of civilization against barbarism.”

His remarks came during the opening of talks in Washington with foreign ministers of the Global Coalition to Defeat ISIS, a group formed by the United States in 2014.

“The United States will continue to lead the coalition and the world on this essential security effort,” Pompeo said. The coalition will discuss and review in meetings with 31 other nations about the next steps to take as part of their joint campaign to defeat ISIS.

The United States is keeping open its capacity to conduct air operations and has repositioned some troops in northeast Syria and in the broader region to “make sure that ISIS will never get a second wind and to prevent ISIS from re-capturing the oil fields,” Pompeo said. In addition, U.S. leadership is working with members of the coalition to stabilize already liberated areas, get humanitarian relief to its intended destinations, and ensure ISIS will not gain new footholds will continue.

One of the actions the coalition should take to limit the chances of an ISIS resurgence is for coalition members to “take back the thousands” of captured terrorist fighters in Iraq and Syria—who had come from their countries—into custody. He said coalition members should “impose accountability for the atrocities that they have perpetrated,” Pompeo said, saying they should be prosecuted.

“We can’t stop now,” Pompeo said. “We must make sure that ISIS never again flourishes, that work begins with carrying out justice against those who deserve it.”

Mark Cancian, senior adviser for the International Security Program at the Center for Strategic and International Studies, told The Epoch Times he doesn’t believe the United States will completely withdraw its presence in Syria, since it doesn’t want to see another resurgence of the terrorist group.

“U.S. decision-makers are inclined to maintain some presence in Syria because they are haunted by the experience in Iraq,” he said. “The U.S. surged in 2007 and greatly reduced violence. Then the U.S. withdrew in 2011, allowing a partisan Iraqi government to oppress the Sunnis. That led to the rise of ISIS.

“Decision-makers want to avoid that cycle in the future.”

Pompeo responded to critics in Washington who said the administration wasn’t treating the defeat of ISIS as a priority. He highlighted how Abu Bakr al-Baghdadi, the leader of ISIS, and Abu Hassan al-Muhajir, the spokesman for the group, were both killed in October in a raid carried out by U.S. Special Operations forces.

“Ask each of them whether there’s a deficit in American leadership countering ISIS,” he said, referring to the fallen ISIS leaders. “Today we are watching the space once occupied by this fraudulent caliphate like a hawk—that’s why we’re maintaining our residual presence.”

At one point in his remarks, Pompeo addressed what he called a growing concern about an ISIS threat emerging outside of Iraq and Syria and said the coalition recently agreed at the working level that West Africa and Sahel would be the preferred initial area for the coalition to focus on, outside of ISIS’s core space. This new initiative will not detract from the mission to eliminate all ISIS remnants in Iraq and Syria, he said.

Pompeo called the coalition assembled in front of him “one of the most successful multilateral undertakings of the century,” saying what they have achieved so far is historic. In September, the Trump administration announced the killing of Hamza Bin Laden, the son of Osama Bin Laden, and in March, the ISIS so-called “caliphate” was declared destroyed.

“We beat back a jihadist dream—a would-be terror state in the center of the Middle East—and we saved millions of people from tyranny unlike anything that the world has seen,” Pompeo said.