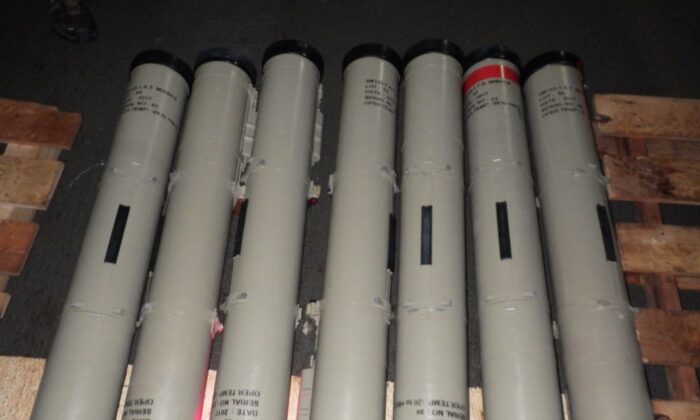 The U.S. military said on Feb. 13 that a Navy warship had boarded and seized weapons from a ship holding 150 anti-tank guided missiles and three surface-to-air missiles, among other components. Everything seized was believed to be “of Iranian design and manufacture.”

Crew of the USS Normandy (CG 60) boarded a boat on Feb. 9 while conducting maritime security operations in the U.S. Central Command area of operations in the Arabian Sea and found a “large cache of weapons.” The boarding was done in accordance with international law.

“The weapons seized include 150 ‘Dehlavieh’ anti-tank guided missiles (ATGMs), which are Iranian-manufactured copies of Russian Kornet ATGMs,” the Command said in a statement.

Many of the weapons systems that were seized in the cache were identical to weapons seized by guided-missile destroyer USS Forrest Sherman (DDG 98) in a previous incident that also occurred in the Arabian Sea on Nov. 25.

“Those weapons were determined to be of Iranian origin and assessed to be destined for the Houthis in Yemen, which would be in violation of a UN Security Council Resolution that prohibits the direct or indirect supply, sale, or transfer of weapons to the Houthis,” the military added, referring to the weapons seized in the Sherman case.

The weapons taken in recently are still currently in U.S. custody awaiting final disposition. As the operation continues, international partner nations and other organisations are also being invited to inspect the items seized.

Tensions between Iran and the United States and its allies, including Saudi Arabia, have escalated since Washington pulled out of the 2015 nuclear deal in 2018 and reimposed sanctions. Trump pulled the United States out of the deal because it “failed to protect America’s national security interests” and “enabled its malign behavior, while at best delaying its ability to pursue nuclear weapons and allowing it to preserve nuclear research and development,” according to the White House.

Trump has repeatedly vowed that Iran would never succeed in building an atomic weapon.

Meanwhile, the Senate on Feb. 13 passed a bipartisan resolution to limit Trump’s ability to take military action against Iran in the wake of the airstrike that killed a top Iranian commander last month.

The resolution was introduced by Sens. Tim Kaine (D-Va.) and Dick Durbin (D-Ill.) after Iranian General Qassem Soleimani was killed in January. The administration said the move was necessary because forces loyal to Soleimani were plotting attacks on American assets in the region and noted that those same forces killed an American contractor just days earlier.

The resolution would direct the U.S. military to pull back from conflicts with Iran that don’t have congressional approval.