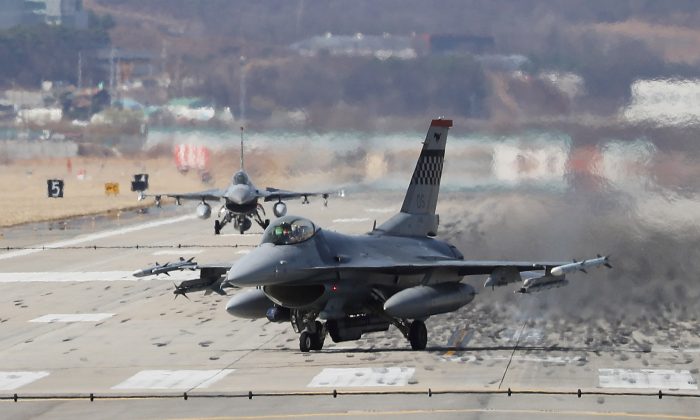 Seoul and Washington said in January they would delay the annual exercises, known as Key Resolve and Foal Eagle, until after the Olympics and Paralympics held in South Korea, helping to create conditions for a resumption of talks between South and North Korea, which sees the drills as a rehearsal for invasion.

The exercises are expected to begin on April 1, and will be of a “scale similar to that of the previous years,” the U.S. military said in a statement late on Monday.

“Our combined exercises are defense-oriented and there is no reason for North Korea to view them as a provocation,” Lieutenant Colonel Christopher Logan, a Pentagon spokesman, said in a separate statement.

The Pentagon said the North Korean military had been notified about the schedule for the drills by the United Nations Command. Logan said the drills were expected to conclude toward the end of May.

Logan said the two joint drills, which include computer simulations and field exercises, would involve about 23,700 U.S. troops and 300,000 South Korea forces.

He said they had been long planned and were not a response to any specific North Korean actions or the current situation on the Korean Peninsula.

After the announcement of the postponement of the drills in January, Pyongyang agreed to hold the first official talks with Seoul in more than two years and to send athletes to the Winter Olympics, easing a standoff over North Korea’s development of nuclear weapons.

The intra-Korean talks led to a visit this month by a South Korean delegation to Pyongyang for a meeting with the North Korean leader. The delegation said Kim committed to denuclearization and expressed eagerness to meet Trump as soon as possible. South Korean official have said Kim is expected to meet with South Korean President Moon Jae-in in April before meeting Trump before the end of May.

The head of the South Korean delegation also said that Kim had said he understood that the joint U.S.-South Korean exercises had to continue.

North Korea has angrily denounced the drills in the past.

In January, U.S. Defense Secretary Jim Mattis said the decision to delay the drills was because of logistical concerns, since many South Korean security forces would be occupied with protecting the Olympics.

In 2017, the joint drills ran from March 1 to April 30, and included the Carl Vinson aircraft carrier. A U.S. official, speaking on condition of anonymity, said no U.S. aircraft carrier would take part this year, which he said was according to plan and not related to the political situation.