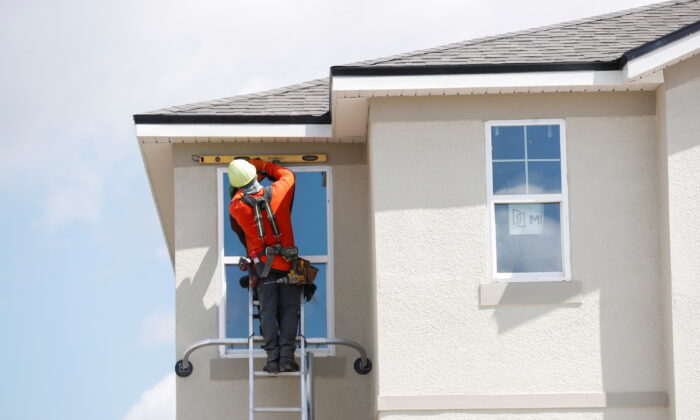 A carpenter works on new townhomes in Tampa, Fla., on May 5, 2021. (Octavio Jones/Reuters)
Economy

The report from the Commerce Department on Tuesday also showed a record backlog of homes approved for construction, but yet to be started. It followed on the heels of news on Monday that sentiment among single-family homebuilders dropped to a seven-month low in April.

The 30-year fixed mortgage rate has risen to 5 percent for the first time in over a decade as the Federal Reserve hikes borrowing costs to quell sky-high inflation. The housing market is the sector of the economy most sensitive to interest rates.

“However, high input costs and shortages, of both labor and materials, remain headwinds for builders. Rising mortgage rates that crimp demand will also be a consideration for building activity going forward.”

Single-family housing starts, which account for the biggest share of homebuilding, dropped 1.7 percent to a seasonally adjusted annual rate of 1.200 million units in March. Single-family homebuilding plummeted in the Northeast. It also fell in the West and densely populated South, but rose in the Midwest.

Starts for housing projects with five units or more jumped 7.5 percent to a rate of 574,000 units, the highest since January 2020.

There is strong demand for rental accommodation, with the economy fully reopened following disruptions earlier in the COVID-19 pandemic. Rents increased by the most in 20 years on an annual basis in March, while the rental vacancy rate in the fourth quarter was the lowest since mid-1984.

The surge in the volatile multi-family segment helped to lift overall housing starts 0.3 percent to a seasonally adjusted annual rate of 1.793 million units, the highest since June 2006.

Stocks in Wall Street were trading higher. The dollar gained versus a basket of currencies. U.S. Treasury prices fell.

The 30-year fixed-rate mortgage averaged 5.0 percent during the week ended April 14, the highest since February 2011, up from 4.72 percent in the prior week, according to data from mortgage finance agency Freddie Mac.

The Fed in March raised its policy interest rate by 25 basis points, the first hike in more than three years. Economists expect the U.S. central bank will hike rates by 50 basis points next month, and soon start trimming its asset portfolio.

Still, record-low housing supply should continue to support homebuilding this year. The backlog of houses approved for construction that are yet to be started increased 2.9 percent to an all-time high of 280,000 units in March.

“It is too early to assess the impact of higher mortgage rates on home purchases, but it appears that there is still growing excess demand for housing,” said Conrad DeQuadros, senior economic advisor at Brean Capital in New York. “This suggests that home construction could hold up well even in the face of a moderate pullback in demand.”

Indeed, Goldman Sachs estimates that housing starts will increase 5 percent to 1.7 million this year, arguing that “when housing markets are tight, like they are today, homebuilders are likely to keep building because they should have little fear that homes will sit vacant after completion.”

But some economists worried that trouble could be brewing, with rising mortgage rates and higher prices likely to slow demand for housing, resulting in a surge in existing home inventory, which they said would create a big bubble in supply.

“With so many homes under construction and so many more permitted, it is not clear the market will be able to support all that activity,” said Joel Naroff, chief economist at Naroff Economics in Holland, Pennsylvania. “The saving factor is that the existing home market, which comprises over 88 percent of the sales, has few homes on the market.”