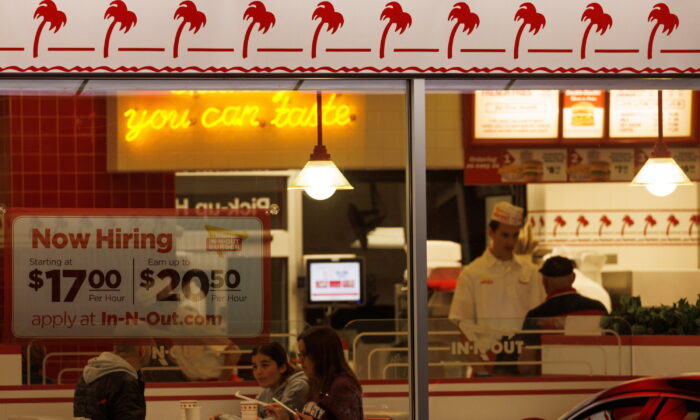 A "Now hiring" sign on the window of an IN-N-OUT fast food restaurant in Encinitas, Calif., on May 9, 2022. (Mike Blake/Reuters)
Economy

The U.S. services industry picked up again in August for the second straight month amid stronger order growth and employment, while supply bottlenecks and price pressures eased, reinforcing the view that the economy was not in recession despite output sinking in the first half of the year.

The Institute for Supply Management said its non-manufacturing PMI edged up to a reading of 56.9 last month from 56.7 in July, the second consecutive monthly increase after three months of declines.

Economists polled by Reuters had forecast the non-manufacturing PMI decreasing to 54.9. A measure above 50 indicates expansion in the services sector, which comprises more than two-thirds of U.S. economic activity.

The growth in services followed the ISM’s manufacturing survey last Thursday, which also showed U.S. factory activity grew steadily last month, bucking a trend in other major economies and providing further evidence the economy was not in recession despite gross domestic product contracting in the first half of the year.

Sharp swings in inventories and the trade deficit tied to gummed up global supply chains have been largely cited for the decline in output. Job gains, by contrast, have remained strong, with U.S. employers hiring more workers than expected last month.

The services sector is being supported by a shift in spending from goods. The ISM’s measure of new orders received by services businesses rose to 61.8 from 59.9 in July.

Its services industry employment gauge also rose to 50.2 from 49.1 in July. U.S. job openings unexpectedly increased in July, the government reported last week, to 11.2 million, and an ongoing tight labor market is keeping up pressure on the Federal Reserve to aggressively raise interest rates to slow demand as it battles to bring down too high inflation.

Elsewhere in the survey, The ISM’s measure of supplier deliveries dropped to 54.5 from 58.3 in July, helping to dampen the pace of increase in services inflation. A gauge of prices paid by services industries for inputs declined to 71.5, the lowest reading since January 2021, from 72.3 in July.