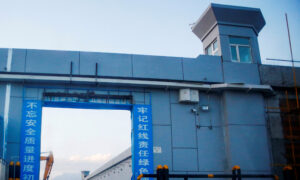 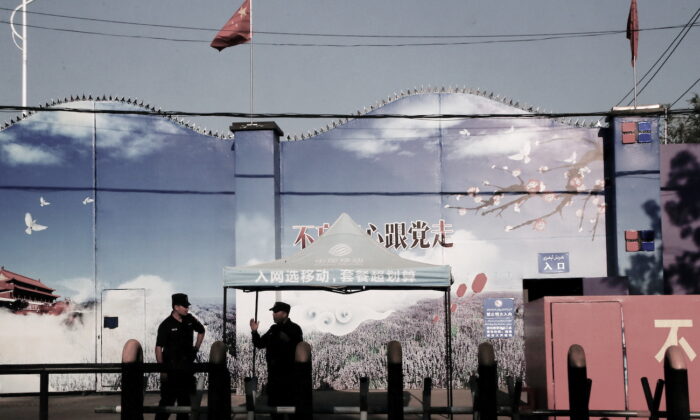 Security guards stand at the gates of what is officially known as a vocational skills education center in Huocheng County in Xinjiang Uyghur Autonomous Region, China, on Sept. 3, 2018. (Thomas Peter/Reuters)
US-China Relations

The U.S. Senate unanimously approved a bill on July 14 that would block the import of all products from China’s northwestern region, where at least 1 million Uyghurs and ethnic minorities are being held in secretive “political reeducation” camps.

The Uyghur Forced Labor Prevention Act, a bipartisan measure, would create a “rebuttable presumption” assuming goods manufactured in Xinjiang are made with forced labor and therefore banned under the 1930 Tariff Act, unless otherwise certified by U.S. authorities.

In a statement, Sen. Marco Rubio (R-Fla.), who introduced the measure alongside Sen. Jeff Merkley (D-Ore.), said that its advancement will send a strong message to Beijing “and any international company that profits from forced labor in Xinjiang … no more.”

The United States would “not turn a blind eye” to the Chinese Communist Party’s (CCP) “crimes against humanity,” nor “allow corporations a free pass to profit from those horrific abuses,” Rubio said.

The Republican senator said that once the legislation passes the House and is signed into law by President Joe Biden, the United States will have more tools to prevent products made with forced labor from entering the country’s supply chains.

“We cannot afford any further delay, and I call on my colleagues in the House to promptly send this bill to the President,” Rubio said.

Democratic and Republican aides said they expected the measure would get strong support in the House, noting the House approved a similar measure by a nearly unanimous vote last year.

“No American corporation should profit from these abuses. No American consumers should be inadvertently purchasing products from slave labor,” Merkley said in a statement.

The legislation would go beyond steps already taken to secure U.S. supply chains in the face of allegations of rights abuses in China, such as existing bans on Xinjiang tomatoes, cotton, and some solar products.

Chinese regime authorities have been accused of committing genocide against Uyghurs and other ethnic minorities in the Xinjiang region.

Uyghurs—the majority of whom are Sunni Muslim—alongside other ethnic minorities such as Tibetans, as well as religious believers who remain outside state control, including house Christians and Falun Gong adherents, have long been targeted by the CCP for transformation through “reeducation.”

China denies the accusations of genocide and forced labor in the region.

“Uyghurs and other predominantly Muslim ethnic minorities in Xinjiang are being forced into labor, tortured, imprisoned, forcibly sterilized, and pressured to abandon their religious and cultural practices by the Chinese government. No American corporation should profit from these abuses. No American consumers should be inadvertently purchasing products from slave labor,” Merkley said.

The Uyghur Human Rights Project said in a statement that it’s grateful to the U.S. Senate for passing the measure, which will “make it more difficult for China to continue to export forced labor goods.”