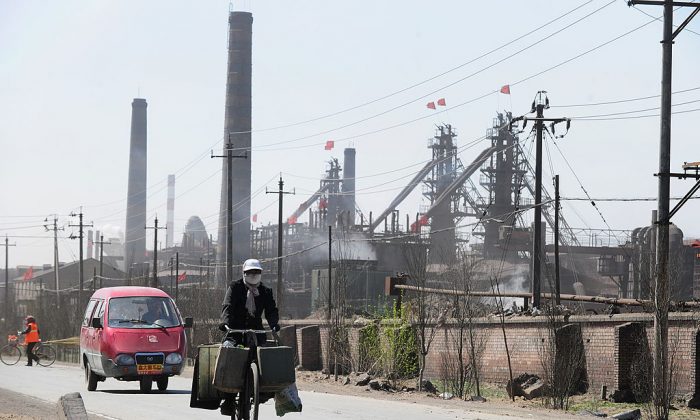 A cyclist rides along a dusty road with dozens of factories processing rare earths, iron, and coal, on the outskirts of Baotou City in Inner Mongolia, northwestern China, on April 21, 2011. (Frederic J. Brown/AFP/Getty Images)
US-China Relations

Senate Bill Aims to Free US From Mineral Dependence on China

The bill, named the “Rare Earth Element Advanced Coal Technologies Act (REEACT),” was introduced by Sens. Joe Manchin (D-W.V.), Shelley Moore Capito (R-W.V.), and Lisa Murkowski (R-Alaska). Manchin and Capito are sponsors of the bill, while Murkowski is the chairperson of the Senate Energy and Natural Resources Committee.

The bill’s objective is to provide federal funding to support the development of U.S. technology that can be used to extract rare earth elements (REEs) from coal and coal byproducts in U.S. mines.

“As the leader of the free world, the United States should not be depending on China and other foreign nations for our supply of rare earth elements,” Manchin said in a press release released by Murkowski’s office.

Manchin added: “This important technology would go a long way in re-establishing our domestic production which is critically important to our national security.”

China currently controls more than 90 percent of the global supply in rare earth metals, according to a January 2017 report by the U.S. Department of Energy.

China’s dominance is, in part, the result of cheap labor and lax environmental regulations. The extraction of rare earth metals from ores, which involves a separation and refinement process that often requires toxic chemicals, could result in serious environmental pollution. But many Chinese companies don’t spend money to treat the toxic waste.

With such price advantages over foreign rare earth companies, Chinese companies then buy up mines from failed competitors—with some of the funding for buying overseas natural resources coming from Beijing’s foreign-exchange reserves.

According to data from the U.S. Geological Survey (USGS), the United States is dependent on imports for 64 strategic metals and minerals—in quantities to meet more than 25 percent of U.S. demand as of 2017. Of the 64, about 35 are mostly imported from China. The total value of all rare earth imports in 2017 was roughly $150 million.

“Rare earth elements are essential to our economy and national security,” Capito said. “This legislation would help support the research and development of these technologies, a win-win-win for Appalachia’s economy, the environment, and our national defense.” The Appalachian region is home to much of the U.S. coal mining industry.

If passed, the bill would authorize the Department of Energy to spend an annual budget of $23 million from 2020 through 2027 to carry out programs to develop such technologies.

Additionally, the Secretary of Energy, in consultation with the Secretary of Defense and the Secretary of Interior, would submit to Congress a report less than a year after the bill is passed, assessing the research, development, demonstration, and market impact of American REE production technologies.

“Breaking our foreign mineral dependence is critical to the future of manufacturing in America,” Murkowski said in the press release.

The bill includes provisions to “clean up mine sludge and acid mine drainage and reduce the environmental impacts of coal production,” James Wood, interim director of the West Virginia Energy Institute, said in the press release.

Manchin first introduced a similar version of the REEACT Act in July 2017.

A key material used to manufacture batteries for electric vehicles (EVs) is lithium. To address China’s dominance—it produces about two-thirds of the world’s lithium-ion batteries compared to 5 percent by the United States—U.S. officials plan to meet with U.S. automakers and lithium miners in early May to launch a national strategy on the electric vehicle supply chain, according to Reuters, citing three unnamed sources.

The Chinese regime has targeted development of its electric vehicle industry as a national priority; thus, many Chinese automakers are boosted by government subsidies. Chinese EV makers CATL and BYD have reportedly received millions in such subsidies. To squeeze foreign competitors out of China, Beijing also rolled out preferential subsidies for Chinese EV makers who use domestically produced batteries.

According to the USGS, U.S. imports of lithium have doubled since 2014 in part because of rising demands from U.S. electric car maker Tesla and battery makers.

As part of the national strategy, Murkowski is expected to introduce separate legislation aimed to streamline the permitting process to license lithium and other mines; bolster state and federal studies of domestic supplies of critical minerals; and encourage mineral recycling, among other topics, according to Reuters, citing an anonymous source.

Five Western companies, including the U.S.-based BHE Renewables, are developing U.S. lithium projects that plan to use new technologies to extract the metal from clays, bromine, and even oilfield waste, processes not common elsewhere and considered game-changing by some analysts.

If all five projects come online by 2022 as planned, the United States would produce at least 77,900 tons of lithium carbonate equivalent each year, making the country one of the world’s largest lithium producers.