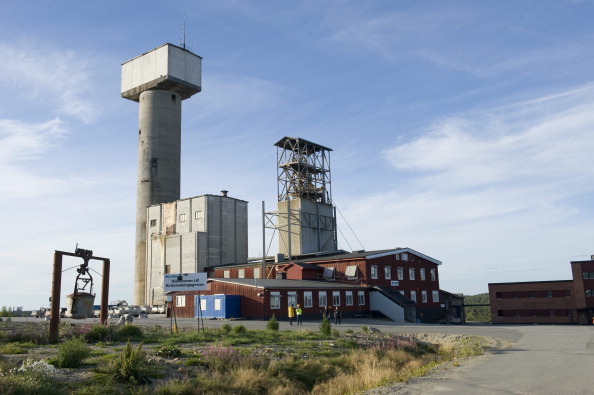 Men stand in front of a mine in Kristineberg, Sweden on Aug. 25, 2013. (Erland Segerstedt/AFP/Getty Images)
By Frank Fang

Rare-earth metals are critical to the modern economy as they are a key material for making batteries that power electric vehicles; are added to touchscreens and circuit boards in smartphones; and are used in laser systems that guide missiles and bombs.

While European Union countries are among the world’s biggest electric-vehicle markets, the bloc as a whole has only a few rare-earth metal deposits. Other than deposits in several countries such as Greenland, Norway, and Finland, the EU relies on imports to support industrial demand.

Cobalt, one of the key minerals in manufacturing lithium-ion batteries that power electric cars and smartphones, is currently only mined in Finland, among all EU countries.

The Geological Survey of Sweden (SGU), a Swedish government agency, issued an updated report on the Scandinavian country’s rare-earth deposits Dec. 7, detailing the country’s geological potential for mining the metals. But the potential mining boom in Sweden could be dashed because of China’s dominance in the market, said a Swedish analyst.

China currently controls more than 90 percent of the global supply in rare-earth metals, according to a January 2017 report by the U.S. Department of Energy. Meanwhile, the Democratic Republic of the Congo accounted for 65 percent of global cobalt supplies in 2017, according to the research and consulting firm Wood Mackenzie.

Much in the way that Sweden is dependent on oil imports, Persson said the country has been dependent on importing rare-earth metals, because they are critical for the electric-vehicle sector. That exposes Sweden to great vulnerability.

China’s rare-earth dominance can be explained in two ways. First, in 2009, Beijing announced that it would use its huge foreign-exchange reserves to buy access to overseas natural resources. Second, China’s rare earths are cheaper because of cheap labor and lax environmental regulations, according to mining news site Mining Technology. The extraction of rare earths from ores, which involves a separation and refinement process that often requires toxic chemicals such as acids, could result in serious environmental pollution.

By intentionally lowering prices of rare-earth metals in the face of competition, Chinese companies force their competitors into bankruptcy—then purchase the mines from the failed competitors.

SGU first released its finding in a report in February, which identifies Sweden to be rich in rare-earth metals such as lithium, cobalt, and graphite. In an update, released on Dec. 7, SGU carried out a more thorough geological mapping of deposits around Sweden, discovering previously undetected rare-earth metals at new locations.

“So Europe needs to think about whether it’s really that healthy to be that import-dependent on, for example, the Congo, where a lot of the exploration is done in some pretty dire conditions,” said Swedish Enterprise and Innovation Minister Mikael Damberg, in an interview with Sweden’s English-language news site The Local, about the February report.

Sweden is making efforts to wean the country’s dependence on foreign supply chains in its electric-vehicle battery sector.

In October, Swedish battery maker Northvolt, which was established by former Tesla executive Peter Carlsson, announced that it would team up with German carmaker BMW and Belgian mining company Umicore to form “a joint technology consortium, in order to work closely together on the continued development of a complete and sustainable value chain for battery cells for electrified vehicles in Europe,” according to the company’s website.

One of the consortium’s projects is building a factory set to be Europe’s largest battery maker.

According to Reuters, the factory, which will start production in 2020 and reach the capacity of 32-gigawatt hours (GWh) by 2023, is aimed at competing with Asian rivals, such as Samsung, LG Chem, and China’s CATL.

The Pentagon, in a report issued in October and ordered by U.S. President Donald Trump, expressed similar concerns about China’s dominance in the rare-earth-metal market.

“China’s domination of the rare-earth-element market illustrates the potentially dangerous interaction between Chinese economic aggression guided by its strategic industrial policies and vulnerabilities and gaps in America’s manufacturing and defense industrial base,” the report said.

According to data from the U.S. Geological Survey, the United States imported about $150 million worth of rare earth metals in 2017, the majority of which originated from China. The United States didn’t produce any rare-earth minerals domestically that year.

For example, in 2015, the Mountain Pass Mine, a rare-earth mine in California, was driven into bankruptcy as China flooded the market with minerals and sent prices falling. The mine, owned by Molycorp, was eventually bought up by a Chinese-led consortium, Shenghe Resources, in June 2017.

China has also invested in Africa and Latin America, in exchange for their commodity materials and rare earths, the U.S. report pointed out, adding “an additional level of consideration for the scope of this threat to American economic and national security.”

In September 2010, tensions between China and Japan arose after a Chinese fishing boat collided with two Japan Coast Guard ships near uninhabited islands in the East China Sea that both countries claim as their territory, according to Reuters. The boat was subsequently arrested by Japanese authorities for an investigation, an action that angered Beijing, which retaliated by imposing an export ban on rare-earth metals to Japan. Beijing lifted the ban roughly a month later.

But Japan’s reliance on China could ease in the near future. Japanese researchers discovered 16 million tons of rare earths at its exclusive economic zone off the Ogasawara Islands, about 2,000 kilometers (about 1,242 miles) southwest of Tokyo, in April, according to Japanese daily newspaper Asahi Shimbun. The deposit is estimated to hold enough minerals to meet global demand for centuries.