Biden Says US Troops to Be Withdrawn From Afghanistan by Sept. 11
0
Share Now
TelegramFacebookTweetEmailTellMeWeReddit
Copy Link 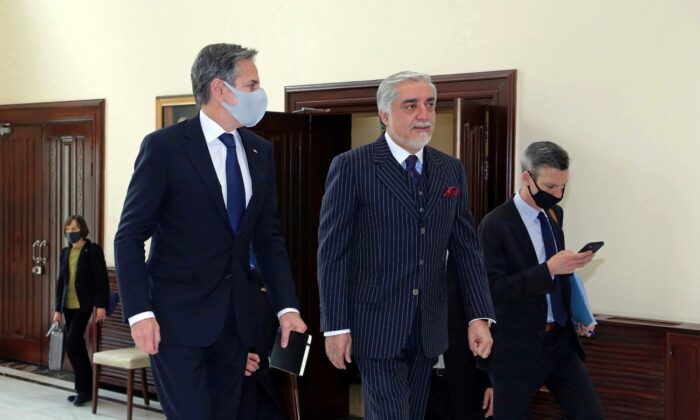 Secretary of State Antony Blinken visited Afghanistan on April 15, less than 24 hours after President Joe Biden announced that all American troops would be leaving the country by Sept. 11.

Blinken, in an unannounced trip, met in Kabul with the country’s president, Ashraf Ghani, and another top official, Abdullah Abdullah.

The overarching message was that the United States will continue supporting Afghanistan despite plans to pull out all troops.

“We’ve achieved the objective we set out nearly 20 years ago. We never intended to have a permanent military presence here. The threat from Al Qaeda in Afghanistan is significantly degraded. Osama bin Laden has been brought to justice. After years of saying that we would leave militarily at some point, that time has come. But even when our troops come home, our partnership with Afghanistan will continue,” Blinken told reporters during a press conference.

Biden said a day prior that the initial military action in 2001, which he backed as a senator, had a clear objective and the cause was just.

But as far back as 2008, when Biden, vice president-elect at the time, and incoming President Barack Obama flew to Afghanistan, Biden said he saw that an “endless American military force could not create or sustain a durable Afghan government.”

“After consulting closely with our allies and partners, with our military leaders and intelligence personnel, with our diplomats and our development experts, with the Congress and the Vice President, as well as with Mr. Ghani and many others around the world, I have concluded that it’s time to end America’s longest war. It’s time for American troops to come home,” he said.

The withdrawal was already set for this year under an agreement hammered out during the Trump administration, provided the Taliban kept violence levels low. Military officials, though, have repeatedly cast doubt on the Taliban meeting those conditions.

Blinken warned that the Taliban should understand that any attack on U.S. forces as they withdraw would be met with force, but conceded that it was time for other parties to take over the primary responsibilities in paving a path forward.

“It’s very important that the Taliban recognize that it will never be legitimate and it will never be durable if it rejects a political process and tries to take the country by force,” he told reporters.

A readout of the secretary of state’s meeting with Ghani said the officials discussed “[a] shared investment in Afghanistan and the importance of preserving the gains of the last twenty years, especially in building a strong civil society and protecting the rights of women and girls” and “counter-terrorism cooperation and [a] shared commitment to ensure al-Qa’ida never regains a foothold in Afghanistan.”

Ghani told Blinken that Afghani leaders “respect the decision” of the United States on withdrawing and “are adjusting our priorities,” The Associated Press reported.

Blinken also convened with Abdullah, the chair of the Afghanistan High Commission for National Reconciliation, going over the continued work toward a permanent ceasefire between the Taliban and the Afghan government.