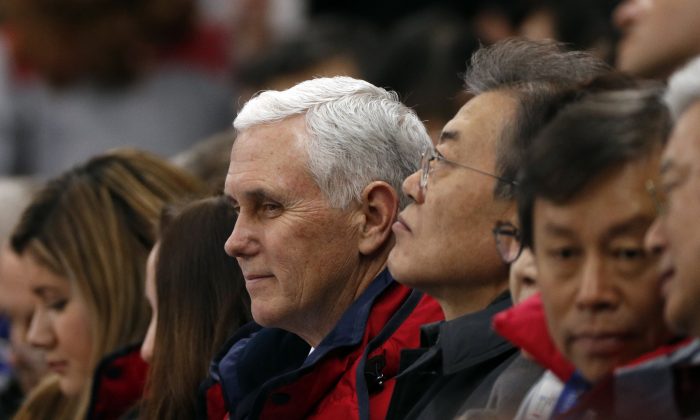 WASHINGTON/SEOUL—U.S. Vice President Mike Pence was scheduled to meet with North Korean officials, including leader Kim Jong Un’s sister, while in South Korea for the Winter Olympics this month but the North Koreans canceled at the last minute, U.S. officials said on Tuesday.

“North Korea dangled a meeting in hopes of the Vice President softening his message, which would have ceded the world stage for their propaganda during the Olympics,” Pence’s chief of staff, Nick Ayers, said in a statement.

But after Pence condemned North Korean human rights abuses and announced plans for new economic sanctions, North Korea “walked away from a meeting or perhaps they were never sincere about sitting down,” Ayers said.

“At the last minute, DPRK officials decided not to go forward with the meeting. We regret their failure to seize this opportunity,” said Nauert. According to a U.S. official, the meeting was scheduled for Feb. 10 and was canceled two hours before it was set to start.

A U.S.-led “maximum pressure” campaign has been working to increase economic and diplomatic sanctions on North Korea and “will continue until North Korea agrees to credible talks on a way forward to a denuclearized Korean peninsula,” Nauert said.

The encounter would have been the first scheduled between senior officials from the Trump administration and Pyongyang, which are in a standoff over the North’s development of nuclear weapons capable of hitting the United States.

“The President made a decision that if they wanted to talk, we would deliver our uncompromising message. If they asked for a meeting, we would meet. He also made clear that until they agreed to complete denuclearization we weren’t going to change any of our positions or negotiate,” Ayers said, echoing comments made by Pence since he left the Olympics and other U.S. officials.

“This administration will stand in the way of Kim’s desire to whitewash their murderous regime with nice photo ops at the Olympics. Perhaps that’s why they walked away from a meeting or perhaps they were never sincere about sitting down,” Ayers said in the statement.

Pence led the U.S. delegation to the opening ceremony on Feb. 9, where he was seated a row in front of the North Korean delegation.

In an interview with The Washington Post, Pence said that he “didn’t avoid the dictator’s sister,” but he did ignore her. “I didn’t believe it was proper for the USA to give her any attention in that forum,” Pence explained. He called North Korea “the most tyrannical and oppressive regime on the planet.”

North Korea is the most tyrannical and oppressive regime on the planet. North Korea needs to understand that nothing will change until North Korea permanently abandons its nuclear weapon and ballistic missile programs. #Axios360 pic.twitter.com/E8qF6EbO2M

North Korea's Kim family is a family that very recently ordered that their brother be murdered using chemical weapons. This is a regime & family that ordered their uncle be executed in front of 10,000 people. This is evil in the likes of which we have witnessed rarely. #Axios360 pic.twitter.com/obGn3PSzm6

Pence had criticized Pyongyang’s nuclear ambitions and announced the “toughest and most aggressive” sanctions against Pyongyang yet, while also moving to strengthen the U.S. alliance with Japan and South Korea.

South Korea’s Foreign Minister Kang Kyung-hwa told lawmakers on Wednesday that talks to improve inter-Korean relations had to go in hand with those linked to denuclearization of the North. Seoul was in close talks and cooperation with Washington regarding engagements with Pyongyang, the minister said.

“We are not going to make the same mistakes as previous administrations,” a White House National Security Council official told Yonhap, referring to past U.S.-North Korean negotiations that critics say only handed North Korea more time to build its nuclear and ballistic missile programs.

Signs of a North-South thaw had prompted speculation that it could lead to direct talks between Washington and Pyongyang after months of tension following missile tests by the North Korean regime.

North Korea has refrained from carrying out any weapons tests since late November, when it shot off its largest intercontinental ballistic missile. South Korea’s Unification Ministry declined to say on Wednesday whether North Korea has been engaging in its regular winter military exercises, which usually run from December for a few months.

By Matt Spetalnick and Christine Kim