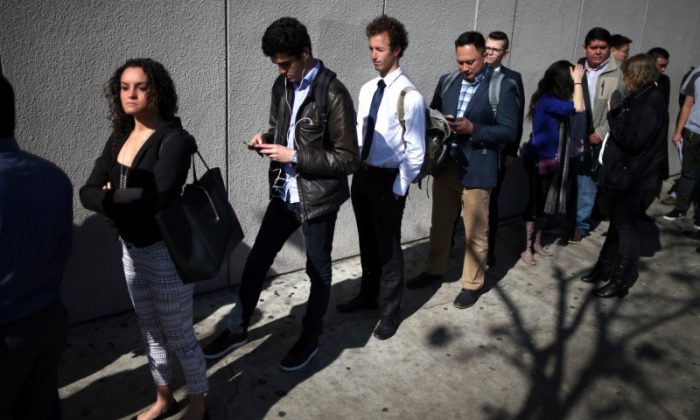 WASHINGTON—U.S. private payrolls rose less than expected in June while the number of Americans filing for unemployment benefits unexpectedly rose last week, but that did little to change perceptions that labor market conditions continued to tighten.

The labor market is viewed as being near or at full employment, with the jobless rate at an 18-year low of 3.8 percent. The unemployment rate has dropped by three-tenths of a percentage point this year and is near the Federal Reserve’s forecast of 3.6 percent by the end of this year.

The ADP National Employment Report showed on Thursday private employers hired 177,000 workers in June, less than market expectations for a 190,000 gain. Private payrolls increased by 189,000 jobs in May.

The government’s comprehensive employment report scheduled for release on Friday is likely to show that employers added 195,000 jobs to their payrolls in June, on top of the 223,000 positions created in May, according to a Reuters survey of economists.

U.S. financial markets were little moved by the data as investors awaited the government employment report.

In a separate report on Thursday, the Labor Department said initial claims for state unemployment benefits increased 3,000 to a seasonally adjusted 231,000 for the week ended June 30. Claims data for the prior week was revised to show 1,000 more applications received than previously reported.

Economists polled by Reuters had forecast claims falling to 225,000 in the latest week. Claims could become volatile in the coming weeks as automobile manufacturers close assembly lines for annual retooling.

More auto workers are likely to be affected by the temporary plant closures than in the past, which could throw off the model that the government uses to smooth the data for seasonal fluctuations. General Motors has announced it will close its Flint assembly plant for the whole of July.

The Labor Department said only claims for Maine were estimated last week.

The four-week moving average of initial claims, considered a better measure of labor market trends as it irons out week-to-week volatility, rose 2,250 to 224,500 last week.

The claims report also showed the number of people receiving benefits after an initial week of aid increased 32,000 to 1.74 million in the week ended June 23. The four-week moving average of the so-called continuing claims fell 1,750 to 1.72 million, the lowest level since December 1973.