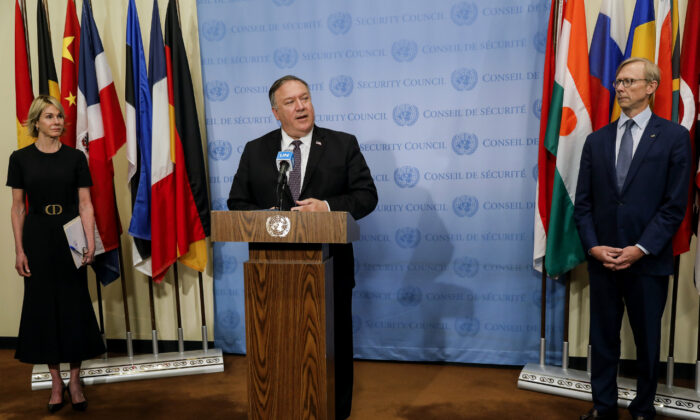 Secretary of State Mike Pompeo speaks to reporters following a meeting with members of the U.N. Security Council on Aug. 20, 2020, as U.S. Ambassador to the United Nations Kelly Craft and U.S. special representative for Iran Brian Hook listen. (Mike Segar/Pool via AP)
US News

The Trump administration on Thursday formally notified the United Nations of its demand for all U.N. sanctions on Iran to be restored in order to prevent Iran from purchasing weapons that could be used to arm terrorist organizations.

Secretary of State Mike Pompeo delivered the notification to U.N. Secretary-General António Guterres and the president of the U.N. Security Council citing significant Iranian violations of the 2015 nuclear deal—a requirement to “snap back” U.N. sanctions.

In the letters presented to both U.N. officials, the U.S. notified the body that it had initiated the restoration of virtually all U.N. sanctions on Iran that had been lifted under U.N. Security Council Resolution 2231, which also endorsed Iran’s nuclear deal, Pompeo said at a press conference on Thursday.

The Trump administration resorted to invoking a “snapback” of all U.N. sanctions on Iran that were in effect before the Iran nuclear deal, also known as the Joint Comprehensive Plan of Action (JCPOA) that was signed in 2015, after the U.N. Security Council voted against extending the arms embargo on Iran set to expire in October.

Once the arms embargo expires, Iran will be able to purchase conventional weapons from China, Russia, or other countries.

Pompeo said the U.N. sanctions will prevent Iran, “the world’s largest state sponsor of terrorism,” from buying and selling planes, tanks, missiles, and other kinds of conventional weapons.

Along with an arms embargo, a snapback of U.N. sanctions would include a ban on Iran developing ballistic missiles capable of delivering nuclear weapons and a halt to Iran’s nuclear enrichment-related and reprocessing activities. Countries would also be urged to inspect shipments to and from Iran, and be authorized to seize any banned cargo.

The U.N.’s nuclear watchdog, the International Atomic Energy Agency, has reported some Iranian violations of the agreement, but Tehran says those are the result of the United States violating the accord when it withdrew and then re-imposed harsh unilateral sanctions.

The United States “has made every diplomatic effort” for almost two years trying to renew this arms embargo, he added.

Pompeo noted that the European participants in the deal—Germany, France, and the United Kingdom (the E3)—had attempted to bring Iran back into compliance. But he said, “despite extensive efforts and exhaustive diplomacy on the part of those member states, Iran’s significant non-performance persists.”

“They all told me privately that they don’t want the arms embargo lifted either” but they did not provide any alternative solution, Pompeo said at the press conference,.

However, Gulf countries including Bahrain, Kuwait, Oman, Qatar, Saudi Arabia, and the United Arab Emirates sent a letter to the U.N. Security Council urging a renewal of the arms embargo before its expiration, Pompeo said.

Pompeo hopes the U.S. action to reinstate the sanctions on Iran will put pressure on it “to behave like a normal country, and to come back to the bargaining table,” and called on other countries to join the U.S. in crafting a stronger deal with Iran.

“After the deal [JCPOA] went into effect, and previously sanctioned assets were unfrozen, Iran’s defense budget (around two-thirds of which goes to the Islamic Revolutionary Guard Corps) increased by an estimated 30%-40%. The funds Iran gave to Hezbollah, Hamas, and other terrorist groups climbed to nearly $1 billion annually,” according to a paper by Prof. Jacob Nagel, a visiting senior fellow at the Foundation for Defense of Democracies (FDD); Yaakov Amidror, a distinguished fellow at JINSA’s Gemunder Center for Defense and Strategy in Washington; and Jonathan Schachter, a former adviser to the prime minister of Israel.

“Iran continued to ignore its obligations on missile development and the export of weapons. The Revolutionary Guards began trying to establish a permanent military presence in Syria, from which they launched drone and missile attacks on Israel,” Nagel, Amidror, and Schachter wrote for the FDD. “Houthi attacks on Saudi Arabia, using Iranian missiles, accelerated.”

After the United States initiated the “snapback,” France, Germany, and the United Kingdom said in a statement that because the U.S. withdrew from JCPOA, they cannot “support this action, which is incompatible with our current efforts to support the JCPOA.”

“We remain committed to the JCPOA despite the significant challenges caused by U.S. withdrawal, “ the E3 said in the statement. They urged Iran “to reverse all measures inconsistent with its nuclear commitments and return to full compliance without delay.”

The E3, however, has expressed in the statement “serious concerns” regarding the impact of the expiration of the Iran arms embargo on regional security and their determination to resolve “these challenges” through diplomatic means.

Pompeo said at the press conference that the United States did not notify the U.N. that it withdrew from the JCPOA because the Iran deal and the U.N. resolution are “completely independent.”

The JCPOA is not a treaty but a political agreement, Pompeo said. The U.N. resolution gives the right to execute snapback to a set of states unconditionally, he added.

China’s U.N. Ambassador Zhang Jun asked Indonesia, which currently holds the rotating presidency of the U.N. Security Council, “not to identify and circulate the U.S. communication as a notification” to trigger the snapback process and to consult with all council members on how to proceed.

Former Vice President of the Obama administration Joe Biden said he would rejoin the deal if Iran first resumed compliance.

“If Iran returns to strict compliance with the nuclear deal, the United States would rejoin the agreement and build on it, while working with allies to push back on Iran’s destabilizing actions,” Biden campaign spokesman Andrew Bates told Reuters.