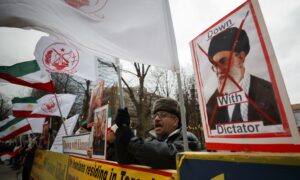 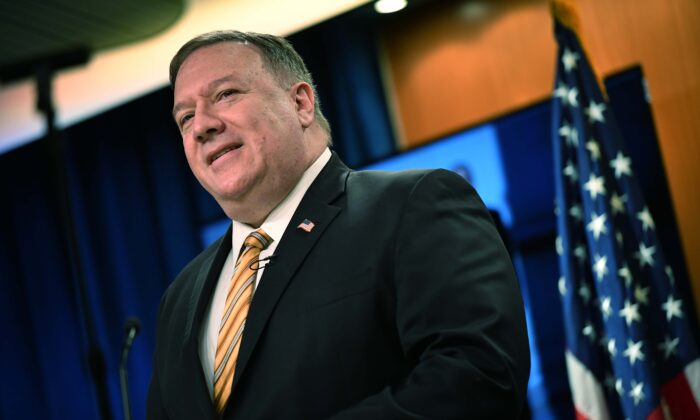 U.S. Secretary of State Mike Pompeo speaks during a news conference at the State Department in Washington, on June 24, 2020. (Mandel Ngan//AP)
US News

U.S. Secretary of State Mike Pompeo urged the U.N. Security Council on Tuesday to extend a U.N. arms embargo against Tehran that expires in October and to reject “extortion diplomacy.” He called Iran “the world’s most heinous terrorist regime.”

If the United Nations fails to extend the arms embargo, Iran will be free to purchase Russian fighter jets that could strike targets in cities like Riyadh, New Delhi, Rome, and Warsaw, Pompeo told the U.N. Security Council on June 30.

It would also be able to upgrade and expand its fleet of submarines that could threaten freedom of navigation and disrupt international shipping in the Strait of Hormuz, the Persian Gulf, and the Arabian Sea, he added.

Moreover, Iran will be able to purchase new and advanced technology “for its proxies and partners throughout the Middle East, including Hamas, Hezbollah, and the Houthis,” as well as sell arms to Venezuela, Syria, and Afghanistan if the embargo expires, Pompeo said.

Through purchasing arms for itself and its allies, Iran could destabilize the Middle East, which in turn, could destabilize oil, impacting countries that rely on stable energy prices like Russia and China, Pompeo said.

Pompeo quoted Iran’s President Hassan Rouhani, who said in November, “When the embargo … is lifted next year, we can easily buy and sell weapons.”

The U.N. Secretary-General’s report on the implementation of Security Council Resolution 2231 confirmed the Iranian origin of weapons used to attack Saudi Arabia in September 2019, as well as weapons seized off the coast of Yemen in November 2019 and February 2020.

Iran also provides arms to proxy groups and terrorist organizations “across the Middle East, such as in Syria, Lebanon, Iraq, Yemen, and Bahrain,” thus continuing to violate the embargo, the State Department said in its fact sheet.

The embargo on conventional arms sales was imposed on Iran by the U.N. Security Council with Resolution 2231, which also endorsed the Iran nuclear deal signed in 2015. If the embargo is allowed to expire on Oct. 18, China, Russia, and other countries will be able to sell conventional weapons to Iran.

Iran announced last year that it had developed a new centrifuge that allows it to enrich uranium up to 50 times faster than allowed under the JCPOA. Iran also denied inspectors with the International Atomic Energy Agency “access to locations Iran is obligated to provide,” according to Pompeo.

“The council must reject extortion diplomacy,” Pompeo said. “President Rouhani recently declared: ‘Iran will give a crushing response if the arms embargo on Tehran is extended.'”

The extension of the arms embargo on Iran has been overwhelmingly supported by a bipartisan majority of the U.S. House of Representatives.

The support letter, signed by 387 out of 435 Representatives, calls on the Trump administration to extend the embargo because “permitting Iran to buy and sell weapons would pose a grave risk to security and stability around the world.”

In 2018, the Trump administration withdrew the United States unilaterally from JCPOA saying that the deal had failed to prevent Iran from pursuing nuclear weapons and allowed the Iranian regime to support terrorist activities internationally.

The five other signatories of the nuclear deal—Russia, China, the United Kingdom, France, and Germany—remain committed to it, saying the agreement is key to continuing inspections by the International Atomic Energy Agency and to preventing Iran from pursuing nuclear weapons.

The United States has circulated a draft Security Council resolution to extend the arms embargo indefinitely. Pompeo said that it is the United States’ “overwhelming preference” to work with the 15 member countries to adopt it.

Pompeo indicated that if the resolution isn’t approved, likely due to Russian and Chinese opposition, the United States will move to invoke a provision of the 2015 nuclear deal between Iran and world powers to re-impose all U.N. sanctions against Iran.

Iran’s Foreign Minister Mohammed Javad Zarif vehemently opposed any extension of the arms embargo, warning that Iran’s options “will be firm” if it is maintained and that the United States will bear full responsibility for further sanctions.

Zarif told the council later that the Unites States has violated all provisions of the deal by its withdrawal and insisted that the arms embargo be lifted completely on its Oct. 18 expiration date.

“Any attempt to change or amend the timetable” for lifting the embargo is tantamount to undermining the entire resolution, he said.

China’s U.N. Ambassador Zhang Jun also opposed extending the arms embargo, saying that after having quit the nuclear agreement, the United States is no longer a participant and “has no right to trigger” the snap-back provision in the resolution to reimpose U.N. sanctions.

European Union Ambassador Olof Skoog told the council that the nuclear deal “has removed the prospect of a nuclear-armed Iran from the regional security equation” in a verifiable way and the international community shouldn’t assume it will again be able to address Iran’s nuclear program so comprehensively.