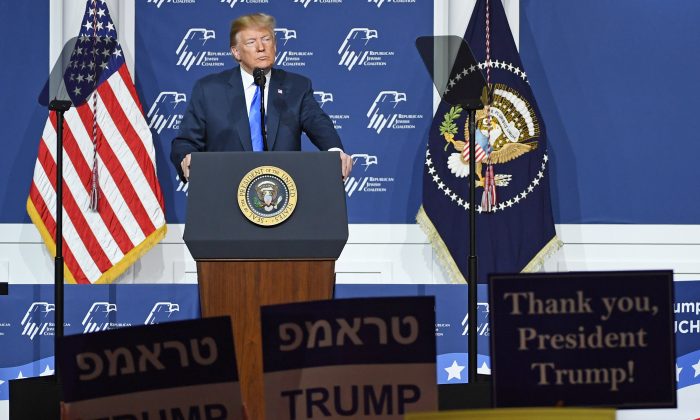 US May Review Ties With Countries Deemed Anti-Israel, Envoy Says

The United States may soon review its relationships with countries it deems anti-Israel, according to Elan Carr, the State Department’s special envoy for monitoring and combating anti-Semitism.

In a speech in March, Secretary of State Mike Pompeo said that opposition to Israel’s existence as a homeland for the Jewish people was a form of anti-Semitism or hostility toward Jews. He said these views were rising worldwide: “The Trump administration opposes it unequivocally and we will fight it relentlessly. Anti-Zionism is anti-Semitism.”

Such comments from those in the administration represent a shift in policy toward equating anti-Zionism with anti-Semitism. Carr said the U.S. position could indicate future reviews of ties with foreign governments or leaders.

“The United States is willing to review its relationship with any country, and certainly anti-Semitism on the part of a country with whom we have relations is a deep concern,” Carr told Reuters on May 5 during a visit to Israel.

“I will be raising that issue in bilateral meetings that I am undertaking all over the world,” he said. “That is something we are going to have frank and candid conversations about—behind closed doors.”

Carr declined to cite specific countries or leaders or to elaborate on what actions the Trump administration might take. The State Department did not respond by press time to a request for comment on the new policy shift.

“I obviously can’t comment on diplomatic tools that we might bring to bear,” he said. “Each country is a different diplomatic challenge, a different situation, number one. And number two, if I started disclosing what we might do it would be less effective.”

“The New York Times has apologized for the terrible Anti-Semitic Cartoon, but they haven’t apologized to me for this or all of the Fake and Corrupt news they print on a daily basis,” Trump said on Twitter. “They have reached the lowest level of ‘journalism,’ and certainly a low point in @nytimes history!”

At a Mar-a-Lago speech to RNC donors in March, Trump said, “The Democrats hate Jewish people,” referring to multiple anti-Semitic remarks made by Omar and Democrats’ responses to them.

Some U.S. political analysts say Trump and other Republicans hope support for Israel will attract Jewish voters, including those disaffected by pro-Palestinian voices within progressive Democratic Party circles.

Trump announced in March that the United States will recognize Israel’s sovereignty over the Golan Heights. In response, the Republican Jewish Coalition applauded his decision which they said was “one in a long series of decisions that prove he is the most pro-Israel President ever.”

“This move serves to ensure Israel’s security, especially at a time when Iran is openly operating in Syria, right on Israel’s doorstep,” RJC Executive Director Matt Brooks said. “Israel is one of our greatest allies, and its security is paramount to President Trump. Bold policy decisions like this are made possible by the incredible bond between President Trump and Prime Minister Netanyahu. ”