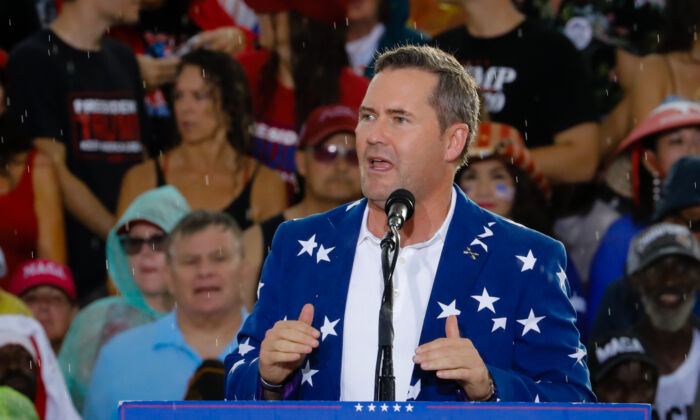 Reps. Mike Waltz (R-Fla.) and Jennifer Wexton (D-Va.) are seeking to strip the International Olympic Committee (IOC) of its tax-exempt status in the United States for turning a blind eye to genocide and other atrocities committed by the Chinese regime.

“Beijing is the last place we should be hosting an Olympics,” Waltz told NTD’s “Capitol Report,” pointing to how China has detained roughly 1 million Uyghurs and other Muslim minorities in internment camps, stamped out freedom in Hong Kong, and failed to be transparent about COVID-19. “I think the last thing United States taxpayers should be doing is subsidizing that behavior or that tax-exempt status.”

Waltz and Wexton introduced the Irresponsible Olympic Collaboration Act (H.R.6433) on Jan. 19, saying that the IOC has violated its registration as a social welfare organization under 501(c)4 of the federal tax code. To be eligible for tax-exempt status under 501(c)4, social welfare organizations must be “devoted exclusively to charitable, educational or recreational purposes,” according to the IRS.

If enacted, the legislation would amend section 501 of the U.S. tax code, eliminating the tax exemption for the IOC and similar organizations for any taxable year, according to the language of the proposal (pdf). The organizations are defined as those whose primary purpose is for international multi-sport athletic competitions and that have a gross income of more than $100 million for any of the three preceding taxable years.

The IOC generates the majority of its revenue through broadcasting and marketing deals. In 2014, the IOC agreed to a $7.75 billion deal with NBCUniversal for broadcast rights in the United States for the Olympic Games through 2032.

The United States is among a group of Western nations that have determined that the Chinese regime’s policies in the Xinjiang region of China, amount to genocide.

“So when do we say enough is enough? If an ongoing genocide isn’t enough to have the IOC look elsewhere, I don’t know what is,” Waltz said, referring to the IOC’s refusal to heed repeated calls to move the 2022 Winter Games or to delay the competition.

Falun Gong, also known as Falun Dafa, is a spiritual discipline that combines meditation and gentle exercises with a moral philosophy centered on the tenets of truthfulness, compassion, and tolerance. The Chinese regime began persecuting its adherents in July 1999, throwing them into labor camps, brainwashing centers, and other detention facilities.

The UK’s China Tribunal concluded in its 2019 report that state-sanctioned forced organ harvesting has taken place in China for years “on a significant scale.” The report (pdf) states that it’s “certain” that organs are being sourced from imprisoned Falun Gong adherents and that they’re “probably the principal source.”

Waltz also criticized U.S. companies that are sponsors of the 2022 Winter Games, saying that they’re “just as complicit” in China’s human rights abuses.

“The Olympic sponsors, many of whom preach good corporate governance, ESG, social justice here at home,” he said, “want to boycott Georgia, but, then, turn a total blind eye to these atrocities [committed by China] that are ongoing. And it’s all about their balance sheet.”

On Jan. 27, 243 global groups, including Freedom House and Human Rights Watch, issued a joint statement calling on more countries to join a diplomatic boycott of the 2022 Winter Games, which begin on Feb. 4 in Beijing. So far, Australia, Canada, Lithuania, the United States, and the UK are among a group of countries that have announced a diplomatic boycott.

The statement also calls out 13 corporate sponsors of the Winter Games, including Airbnb, Intel, Procter & Gamble, and Visa, saying that they should “immediately disclose their human rights due diligence strategies.”

“The companies have not provided meaningful public responses to concerns that their sponsorship creates or contributes to human rights violations, or whether they have acted to mitigate those violations,” the statement reads.

Ultimately, when it comes to China’s human rights abuses, it isn’t a Republican or Democratic issue, according to Waltz.

“This is about our basic freedoms, morals, and values, and standing strong for those who should have those basic human rights,” he said.