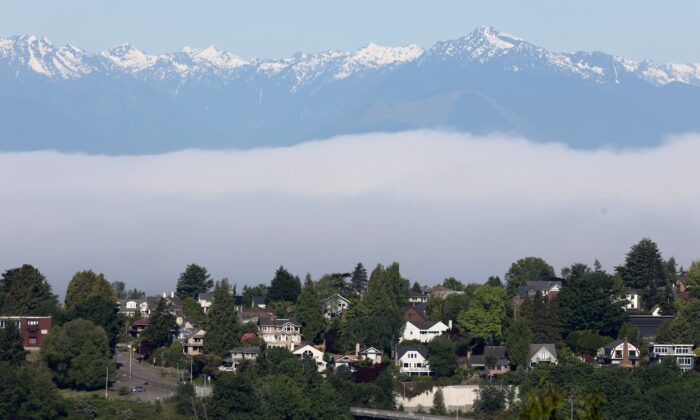 Residential homes are visible under the backdrop of the Olympic Mountains and low fog in the Magnolia neighborhood of Seattle, Wash., on May 14, 2021. (Karen Ducey/Reuters)
Economy

Confidence among U.S. single-family homebuilders rose by the most in nearly a year in October as customer traffic improved for a second straight month, although builders remain concerned that the shortages that are driving up materials prices will hurt home affordability.

The National Association of Home Builders/Wells Fargo Housing Market Index rose 4 points—the most since November 2020—to 80 this month. The reading topped the median estimate of economists in a Reuters poll of 76 and the increase pushed the index to a three-month high.

A reading above 50 indicates that more builders view conditions as good than poor.

“Builders are getting increasingly concerned about affordability hurdles ahead for most buyers,” said NAHB Chief Economist Robert Dietz.

Nonetheless, all three subindexes improved, and conditions were seen as better in all four regions tracked in the monthly survey.

Dietz said affordability may also be tested with interest rates expected to rise in coming months as the U.S. Federal Reserve begins to remove its pandemic-era support for the economy. The Fed is widely expected to announce plans to start cutting its purchases of $120 billion a month of U.S. Treasuries and mortgage-backed debt as early as its next meeting in just over two weeks, although any rate hike by the central bank is seen further away.

Still, home loan interest rates have already begun to rise, with the average 30-year mortgage rate climbing to 3.18 percent in early October, the highest since June, according to the Mortgage Bankers Association.