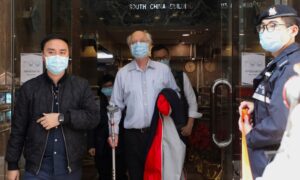 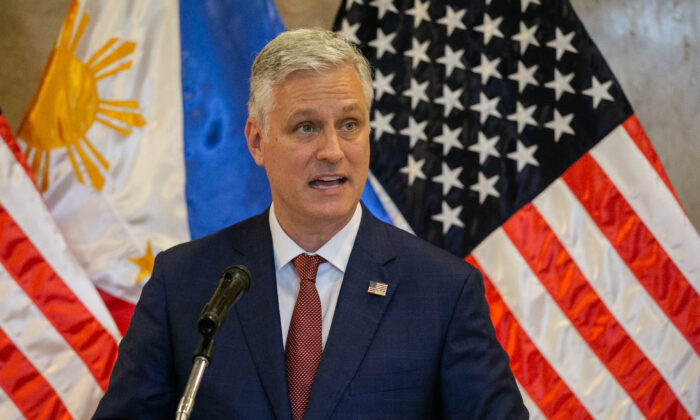 US National Security Adviser Robert O'Brien speaks during a turnover ceremony of defense articles at the Department of Foreign Affairs office in Manila on Nov. 23, 2020. (Eloisa Lopez/Pool/AFP via Getty Images)
China-US News

O’Brien, in a Jan. 11 statement, said the “politicized” arrests last week were “the latest of many successive nails that Beijing has driven into the coffin of Hong Kong democracy.”

A total of 55 pro-democracy activists were arrested on Jan. 6, the largest action since Beijing imposed a draconian national security law on the city that went into effect just over six months ago.

Most of those arrested had taken part in an unofficial primary for a legislative election that was later postponed. Hong Kong authorities allege the primary was part of a plot to take control of the legislature in order to paralyze the government and force the city’s leader to resign.

On Jan. 10, Australia, Canada, the UK, and the United States voiced “serious concern” in a joint declaration about the arrests. The governments said the national security law was a “clear breach” of  the Sino-British Joint Declaration and is “being used to eliminate dissent and opposing political views.” In the Joint Declaration, a 1984 treaty governing Hong Kong’s handover to Chinese from British rule, Beijing had promised the city’s inhabitants autonomy and freedoms not enjoyed in the mainland, under a framework known as “one country, two systems.”

U.S. Secretary of State Mike Pompeo last week said the administration will consider “sanctions and other restrictions” on officials involved in the arrests. The United States has previously placed sanctions on nearly 30 Hong Kong and Chinese officials responsible for subverting the city’s freedoms.

Among those arrested last week were many former lawmakers, local activists, and politicians, as well as human rights lawyer John Clancey, who is a U.S. citizen. The police also raided his law firm, Ho, Tse, Wai & Partners. According to Hong Kong media, Clancey has since been released on bail.

“In May, the Administration demanded answers from Beijing about the origins of the virus and accused the World Health Organization of enabling a cover-up by deferring to the CCP,” he said. “Just as China ignored its international obligations under the Sino-British Joint Declaration, it continues to do so with the International Health Regulations.”

The Trump administration has repeatedly called for greater transparency from Beijing regarding the CCP virus outbreak, and blamed its initial coverup for causing the disease’s global spread. Last year, it withdrew from the World Health Organization in protest of its deference to Beijing.

“The United States was the first major country with the courage and conviction to candidly acknowledge the true nature of the CCP regime,” O’Brien said. “It is critical that nations around the world demand accountability from Beijing.

“The world cannot continue to pay heavy prices for its naiveté and complicity in Beijing’s irresponsible and harmful practices—whether it is ending the rule of law in Hong Kong or not cooperating with health officials on the pandemic. The United States is examining further options to respond.”

Epoch Times staff Frank Fang and The Associated Press contributed to this report.