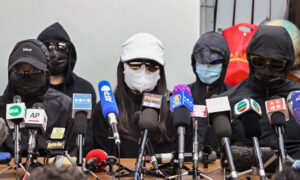 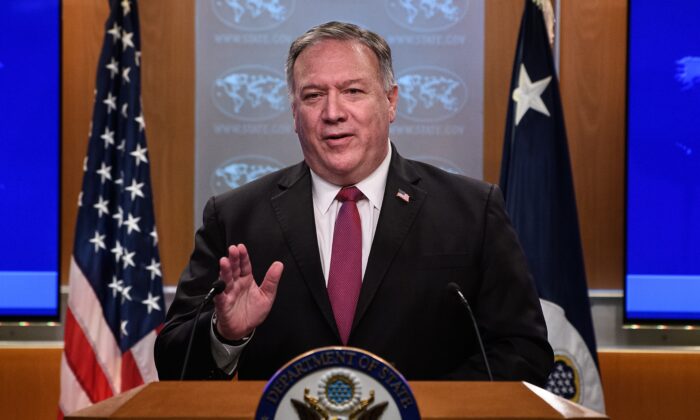 Then-U.S. Secretary of State Mike Pompeo speaks at a press conference at the State Department in Washington on Oct. 21, 2020. (Nicholas Kamm/AFP via Getty Images)
China-US News

Secretary of State Mike Pompeo has threatened U.S. sanctions against individuals and entities responsible for the mass arrests of more than 50 opposition figures in Hong Kong.

“The United States will not stand idly by while the people of Hong Kong suffer under communist oppression,” said Pompeo in a Jan. 6 statement.

He called on those arrested to be released immediately and unconditionally, since they “are guilty of nothing but exercising the democratic rights promised to them by treaty, and due to them through virtue of their humanity. “

In addition to sanctions, Pompeo said that the U.S. government will “explore restrictions” against the Hong Kong Economic and Trade Offices in the United States, which are official representatives of the Hong Kong government, with offices in Washington, New York, and San Francisco.

A total of 53 pro-democracy activists were arrested on Jan. 6, the largest action against the city’s opposition camp since Beijing’s national security law went into effect on June 30 last year. The law penalizes vaguely defined crimes such as subversion and secession with a maximum penalty of life imprisonment.

The activists were arrested on suspicion of committing crimes under the national security law, for their roles in a primary election held by the pan-democracy camp in July, two months ahead of Legislative Council (LegCo) elections.

Among those arrested were many former lawmakers, local activists, and politicians, as well as human rights lawyer John Clancey, a U.S. citizen, after the police raided his law firm Ho, Tse, Wai & Partners. According to Hong Kong media, Clancey has been released on bail.

“I am also appalled by the news of the arrest of an American citizen as part of this campaign of political repression. Let me be clear: The United States will not tolerate the arbitrary detention or harassment of U.S. citizens,” Pompeo stated.

He added that the United States will also take “additional immediate actions against officials who have undermined Hong Kong’s democratic processes.”

The mass arrests drew international outrage. Australia, the European Union, the United Kingdom, and Taiwan have all expressed concerns, while the Inter-Parliamentary Alliance on China, a group of international lawmakers, also condemned the arrests.

In addition to Pompeo, many U.S. officials also have publicly denounced the Chinese Communist Party over the arrests, including Rep. Michael McCaul (R-Texas), Sen. Ben Sasse (R-Neb.), and U.S. Ambassador to the United Nations Kelly Craft.

Hua added that China will take “necessary measures” to safeguard its interests, and the United States will “pay a heavy price” for its actions.