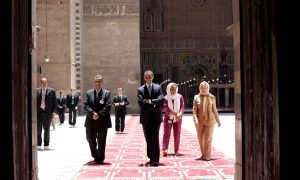 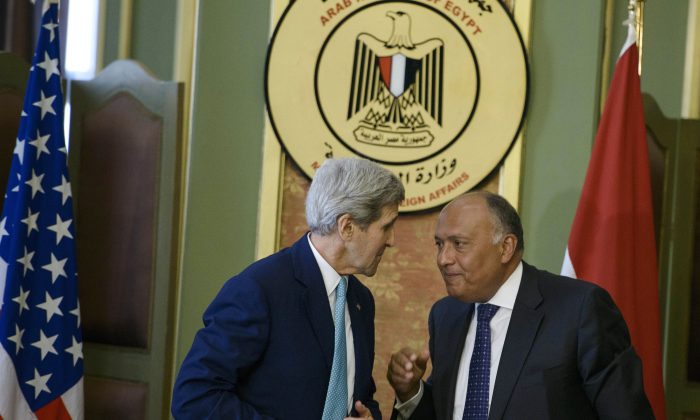 Secretary of State John Kerry (L) and Egypt's Foreign Minister Sameh Shoukry at a press conference after their meeting at the foreign ministry in Cairo, Egypt, on Sunday, Aug. 2, 2015. (Brendan Smialowski/Pool Photo via AP)
Middle East

CAIRO—Despite persistent human rights concerns, the United States on Sunday, Aug. 2, resumed formal security talks with Egypt that were last held six years ago and kept on hiatus until now amid the political unrest that swept the country in the wake of the Arab Spring.

Two days after the United States delivered eight F-16 warplanes to Egypt as part of a military support package that the Obama administration is boosting to help Egypt counter an increasing terrorist threat, Secretary of State John Kerry restarted the so-called strategic dialogue with Egyptian officials in Cairo. The dialogue was last held in 2009 and did not occur in subsequent years due to the Arab Spring and turmoil following the ouster of Egypt’s authoritarian leader Hosni Mubarak in 2011.

Kerry said the administration is committed to working with Egypt to enhance its military capabilities as it confronts growing threats from extremists, particularly in the Sinai Peninsula.

That aid had been on hold until earlier this year due to human rights and democracy concerns in the wake of the military overthrow of Islamist President Mohammed Morsi in 2013.

The dialogue was last held in 2009 and did not occur in subsequent years due to the Arab Spring and turmoil following the ouster of Egypt’s authoritarian leader Hosni Mubarak in 2011.

Before meeting with Egyptian President Abdel-Fattah el-Sissi, Kerry told Foreign Minister Sameh Shoukry that the United States would “continue to provide robust training to the Egyptian military, as the military seeks it and desires it, in an effort to build capacity, and also to meet the highest expectations of your military for its professionalism.” He noted that in addition to the F-16s, the United States had provided Egypt with Apache helicopters, attack boats, armored vehicles, and other weapons systems this year. More aid is on the way, he said.

At the same time, he acknowledged stress in the U.S.–Egypt relationship over human rights and said Washington would continue to press Cairo on the arrests of dissidents and journalists and mass trials.

“Obviously, there has been a little bit of tension over certain issues,” he told reporters at a joint news conference with Shoukry that was held shortly after a court in Cairo again postponed a verdict in the trial of three Al-Jazeera English journalists, whose arrests have sparked widespread condemnation.

Shoukry said no journalists have been detained in Egypt for doing their jobs, only for terrorism and other offenses, and he rejected criticism that detainees were being denied due process. He said Egypt is committed to improving its human rights conditions but noted that all countries, even mature democracies, have imperfect rights records.

Kerry made the case, though, that freedom of speech, assembly, and peaceful political dissent must be allowed if Egypt is to successfully combat extremism, especially ahead of parliamentary elections to be held later this year.

Egypt and the Obama Administration

“We are absolutely clear that terrorists who kill civilians and attack Egyptian security forces have to be brought to justice, and we stand with Egypt in that effort. But it is equally important … to distinguish between those who use violence to achieve their ends and others who seek peacefully to participate in a political dialogue, even if what they say sometimes may make people uncomfortable,” Kerry said.

We are absolutely clear that terrorists who kill civilians and attack Egyptian security forces have to be brought to justice, and we stand with Egypt in that effort.
— Secretary of State John Kerry

He said that fighting extremism requires more than military might and called on Egypt to adopt a broad strategy that would both improve the economy and accept dissent to prevent young people from embracing radical ideologies. “Otherwise, no matter how many terrorists we bring to justice, those groups will replenish their ranks and we will not be safer. We will be involved in a round robin, circular, repetitive process,” Kerry said.

In advance of his trip, Kerry met in Washington with Egyptian-American Mohammed Soltan, who had been sentenced to life in prison in Egypt for financing an anti-government sit-in and spreading “false news.” One of thousands imprisoned after Morsi’s overthrow, Soltan had been on a hunger strike for more than a year before being freed in May after repeated U.S. requests. He is the son of a prominent member of the now-outlawed Muslim Brotherhood.

Shoukry accused the brotherhood of being a leading promoter of extremism in the region, including neighboring Libya, which is in the throes of conflict.

Broadening U.S.–Egyptian trade and economic ties also was also on the table during Kerry’s visit, which comes just days before Egypt inaugurates a second, parallel waterway to allow two-way traffic on the Suez Canal. Egyptian officials are hoping the opening will boost a flagging economy. Kerry congratulated Egypt on the “major” Suez project ahead of its opening on Thursday, Aug. 6, and he announced that U.S.–Egypt trade and investment consultations will resume in the fall.

Kerry was in Cairo on the first stop of a Mideast trip that is mainly aimed at assuaging Arab concerns over the nuclear deal between Iran and world powers. After meeting with el-Sissi, he leaves for Qatar, where he will hold discussions with Gulf Arab foreign ministers on the Iran deal and its implications for the region.

On Iran, Kerry said he would be traveling to Doha to make the case to members of the Gulf Cooperation Council that the Iran nuclear agreement will make the Middle East more secure. The Gulf Arab states have publicly welcomed the deal reached last month in Vienna, but many have expressed private reservations.

“There can be absolutely no question that the Vienna plan, if fully implemented, will make Egypt and all the countries of this region safer than they otherwise would be or were,” he said.