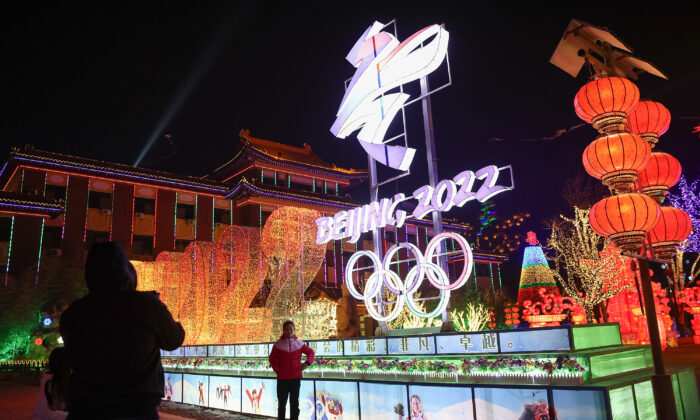 People wear protective masks as they walk in front of the logos of the 2022 Beijing Winter Olympics at Yanqing Ice Festival in Beijing, China, on Feb. 26, 2021. (Lintao Zhang/Getty Images)
US News

US Weighing Coordinated Approach With Allies to 2022 Beijing Olympics

The United States is in discussions with allies coordinating an approach to the 2022 Beijing Winter Olympics, a State Department spokesman said on April 6. The remarks come amid growing calls for a boycott of the Games over the Chinese regime’s severe human rights violations.

“It is something that we certainly wish to discuss. … It is certainly something that we understand that a coordinated approach will be not only in our interests, but also in the interests of our allies and partners,” State Department spokesman Ned Price said at a regular briefing, when asked if the United States was discussing a potential joint boycott with allies.

He added that “discussions are underway” on the issue, but declined to provide a timeframe as to when a decision would be made. The Winter Olympics are scheduled for next February.

Later, Price clarified in an email that he was referring to the United States having a coordinated approach rather than saying the United States was specifically discussing a joint boycott. In a tweet afterward, he wrote that there was nothing new to announce.

“As I said, we don’t have any announcement regarding the Beijing Olympics. 2022 remains a ways off, but we will continue to consult closely with allies and partners to define our common concerns and establish our shared approach to the [People’s Republic of China],” he wrote.

In the past few months, calls have mounted around the world for countries to boycott the Beijing Olympics over its continuing human rights abuses, particularly against Uyghur Muslims in Xinjiang. The Trump administration designated the Chinese Communist Party’s (CCP) actions in Xinjiang a genocide, an assessment endorsed by Biden officials.

A spate of prominent Republicans have called for either the Games to be moved out of China, or failing that, a U.S. boycott of the event.

U.S. Secretary of State Antony Blinken said last month the administration was “listening to concerns” from around the world on the issue of the Beijing Olympics.

“Under no circumstance should the global community give Communist China an international platform to whitewash its crimes, which is what will happen if they are allowed to host the 2022 Olympic Games in Beijing,” Scott wrote in his February letter to Biden.

Sen. Mitt Romney (R-Utah) recently floated the idea of an economic and diplomatic boycott, while allowing athletes to participate in the Beijing Olympics.

White House press secretary Jen Psaki said on Feb. 25 that the United States hasn’t made a “final decision” on the country’s participation in the Olympics, adding that it would look for “guidance from the U.S. Olympic Committee.” The U.S. Olympic Committee, however, in response to Psaki’s remarks, said it opposes a boycott, a position echoed by its counterparts in Canada and the UK.

Meanwhile, the International Olympic Committee (IOC) has defended having the Games in Beijing.

An IOC spokesperson recently told The Epoch Times that the organization and the Games must remain neutral when it comes to global political issues.

Beijing’s human rights record “were and are raised with the government and local authorities,” the spokesperson said.

“We received assurances that the principles of the Olympic Charter will be respected in the context of the Games. We will continue to discuss Games-related issues with the organizers as part of the Games preparation process,” the spokesperson added.

Price said U.S. action that “brings along our allies and partners will have more influence with Beijing.” Recently, the United States, in concert with Canada, the UK, and the European Union, imposed sanctions on CCP officials involved in the genocide in Xinjiang, marking the first coordinated action against Beijing on the issue.